xxxxxJohn Constable was one of the greatest landscape artists of the 19th century, and the first major English painter to limit his subject matter to the natural beauty of rural scenes, mostly from the Stour Valley in his native Suffolk. His technique was originally influenced by the work of Claude Lorrain, Jacob Ruisdael and Thomas Gainsborough, but he succeeded in bringing his scenes alive by an individual style which was noted for its fresh colour and bold brushwork. Among his major works were Flatford Mill (1817), Stratford Mill (1820), The Hay Wain (1821), View of the Stour near Dedham (1822), The Leaping Horse (1825) and The Cornfield (1826). He also produced a number of paintings of Salisbury Cathedral, and views of Brighton and Hampstead, where he lived for a time. Later, his more dramatic, imaginative style included paintings of Old Sarum and Stonehenge. He gained little recognition in England, where landscapes were unfashionable, but his work was well received in France. There, his ability to capture the moods of nature was much admired, for example, by the romantic artists Théodore Géricault and Eugène Delacroix, and later, his use of flecks of colour to enliven his paintings, plus his fascination with the effects of light, influenced the Barbizon School and the Impressionist movement in general. 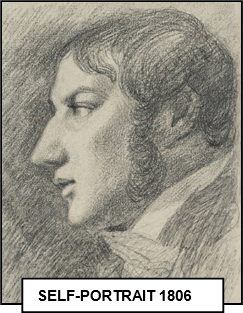 xxxxxJohn Constable, who, along with Joseph Turner was one of the greatest landscape artists of the 19th century, was the first major painter in England to limit his subject matter to the natural beauty of rural scenes, mostly from the Stour Valley in his native Suffolk. And he was, too, the first to paint these scenes on a scale hitherto associated with the recording of historical events, making them large and eye-catching. A Romantic, born of his deep love of nature, his individual style, fresh in colour and bold in brushwork, breathed life and feeling into his tranquil scenes of rural beauty, captured, as it seemed, in a moment of time from the countryside that he loved and sketched as a boy.

xxxxxConstable was born in the village of East Bergholt, Suffolk, a short distance from the River Stour. His father owned flour mills at Flatford and Dedham, and was anxious that his son should carry on the family business. Constable worked for a while in one of the mills and mastered his trade, but he saw his future as a painter. In his “careless boyhood”, as he put it, he had gained an extraordinary love of nature, and spent hours sketching scenes in the beautiful countryside around his home. He was fascinated above all by the wide expanse of sky, the cloud formations, the activity along the river, and the changing weather conditions on cornfields and water meadows. Andxit was during this time that he received encouragement from an amateur artist, a local plumber called John Dunthorne (1770-1844), and from the art connoisseur Sir George Beaumont (1753-1827). He met Sir George in 1795 and was shown his prize possession, Hagar and the Angel by the French painter Claude Lorrain. This painting, particularly its composition and pure method of lighting, had a marked and lasting effect upon his future style. 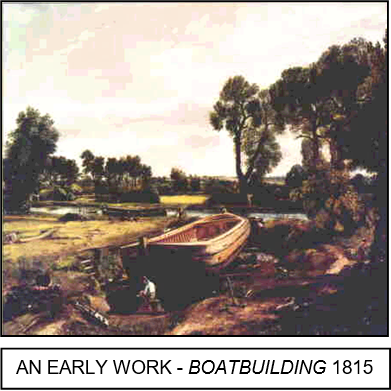 xxxxxConstable’s father was opposed to his son becoming an artist - seeing it as a worthless and disreputable career - but when his younger son, Abram, showed a genuine interest and ability in the family business, he reluctantly gave way, and even granted him a small allowance. He began his studies at the Royal Academy School, London, at the age of 23, and was subjected to a strict classical training. He began exhibiting his landscape paintings in 1802, but it was to be some years before he developed his own distinctive style. His first work of any consequence, Dedham Vale, Morning, did not appear until 1811, and recognition of any value did not come until ten years later. In the meantime he returned nearly every year to the open skies and lowlands of his beloved Suffolk to perfect his skill, and he went on sketching expeditions further afield for the same purpose. He visited the Peak District in 1801, and five years later journeyed to the Lake District. Here, however, unlike the romantic poets Samuel Taylor Coleridge and William Wordsworth, and his great contemporary Joseph Turner, the mountain scenery did not inspire him.

xxxxxIt was after his visit to the Lake District - perhaps because of it - that he decided to concentrate his artistic talent upon the rural scenes of his childhood, set around his home in a small area of natural beauty which was to become immortalised as “Constable Country”. Working in the open amid a familiar landscape, he developed a spirited, realistic style which was all his own, but which, in technique, owed much to the landscapes of Thomas Gainsborough and the Dutch painter Jacob van Ruisdael, an artist from whom he inherited the brooding atmosphere created by darkened skies. But, quite apart from having to live much of his life in London, these were stressful years, caused above all by his long, frustrating courtship of Maria Bicknell, whom he had met and fallen in love with in 1809. Her grandfather, Dr Rhudde, the rector of East Bergholt, opposed the marriage, threatening to disinherit his granddaughter, and it was not until October 1816, following his father’s death, that Constable came in for some money and they were able to marry. 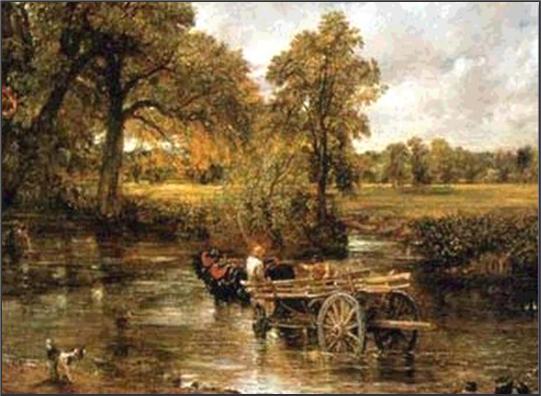 xxxxxOnce married and settled happily in Bloomsbury, he was able to devote all his time to the painting of his large scenes, most of them of his beloved Stour Valley and several feet wide in order to attract attention at the Academy’s annual spring exhibition! To his earlier works, which included Boatbuilding (1815) and Flatford Mill (1817), he now added a series of outstanding canvases - The White Horse (1819), Dedham Lock and Mill (1820), Stratford Mill (1820) The Hay Wain (1821), (illustrated here), View on the Stour near Dedham (1822), The Lock (1824), The Leaping Horse (1825) - considered by many to be his masterpiece - and The Cornfield (1826). And also produced during this period were his Salisbury Cathedral from the Bishop’s Grounds (1823), Chain Pier, Brighton (1827) and Hampstead Heath (1828) 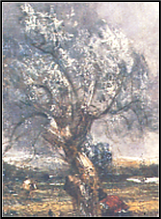 xxxxxIn these scenes of everyday country life Constable achieved a remarkable sense of actuality. Furthermore, due to his painstaking study of colour, cloud formation and light effects, this authenticity related not simply to the subject of his picture, but to the picture itself. Few painters before or since have captured on canvas the moment in the life of a day, with the clouds for example, the meadows, the trees and the running water providing not merely a backdrop to a given scene, but an integral part of the composition itself. He said himself that he aimed to capture “light--dews--breezes--bloom--and freshness". He achieved this in large measure by sharp touches of pure white paint - dubbed “Constable’s snow” - and other broken bits of colour, often applied with a palette knife (as seen in this painting of a tree, a detail from The Leaping Horse). This brought sparkle and life to his work, and enabled him to capture movement, and the changing effects of light and shade on sky, land and water.

xxxxxBut these fleeting glances of a rural landscape were the result of an enormous amount of preparatory work. He made numerous sketches, many in oil, and was able to call upon drawings from nature which he had made over the years. Many of these small oil sketches have proved to be gems in themselves, painted with affection, and valued today for the freedom of their brushwork, their freshness, and their remarkable range of subject. He loved, he once said, the sound of rushing water, old rotten banks, slimy posts, willows, and “every stile and stump”. And he also took infinite care to ensure detailed accuracy. When producing The Hay Wain, for example, he sent off to a friend to obtain a detailed drawing of that particular farm wagon.

xxxxxHis paintings made of Brighton and Hampstead Heath in the 1820s were locations chosen not for their intrinsic beauty (indeed, Constable considered Brighton to be “Piccadilly by the sea“) but for reasons of health. His wife had suffered from consumption for some years, and it was hoped that the purer air in these places would bring her some relief. When she eventually died in November 1828, aged 41, he was heartbroken. “The face of the world,” he told his brother, “is totally changed to me”. The painting he made of Chain Pier, Brighton, just a year before Maria died, had b 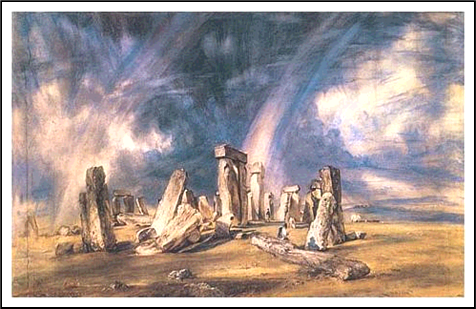 een full of foreboding, and in his Hadley Castle of 1829 (a bleak ruin on a grey coast) and his gloomy Salisbury Cathedral from the Meadows, two years later, the sombre mood of these paintings matched his own. And these later years also witnessed a change in style, and a turn to water colour, possibly prompted by the more flamboyant use of colour by Turner, his rival in landscape painting. To this period belong his monumental Waterloo Bridge from Whitehall Stairs of 1832, his menacing Old Sarum of 1834, and his powerful Stonehenge two years later (illustrated here), now in the Victoria and Albert Museum in London.

xxxxxConstable’s work never found great favour in England during his lifetime, where portraits and historical scenes were the genres in vogue. A French dealer bought The Hay Wain, and he was not admitted to full membership of the Royal Academy until 1829, and then by only one vote. Nevertheless, his remarkable ability to capture the moods of nature greatly impressed the members of the French Romantic School. Both Théodore Géricault and Eugène Delacroix, for example, were inspired by The Hay Wain, exhibited in Paris in 1824. Indeed, it is said that Delacroix made alterations to his Massacre at Chios as a result. And, in the longer term, his dashes of bright colour and his overall rendering of the effects of light influenced the Barbizon School and the French Impressionist movement in general. We are told that Camille Pissarro, after seeing the works of Turner and Constable in 1870, changed his style accordingly. 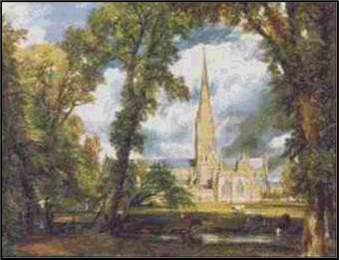 xxxxxIncidentally, when completed in 1823 Constable’s Salisbury Cathedral from the Bishop’s Grounds did not entirely please the bishop for whom it was painted. He disliked the dark clouds billowing over the spire and asked that the sky be improved. Constable did make some changes, but some of the storm clouds remained. He was apt to make his skies – known as “Constable skies” – somewhat overcast and troubled. The Swiss-born English artist Henry Fuseli later commented that he greatly admired Constable’s landscapes but they did “make me call for my raincoat and umbrella”. ……

xxxxx…… As noted earlier, Constable’s Salisbury Cathedral from the Meadows of 1831, was on display in the National Gallery, London, for many years, on loan from a private collection. However, in May 2013, the painting was put up for sale and, to save it for the nation, it was bought by the Tate Britain, London, for £23.1 million. ……

xxxxx…… Constable knew Turner, of course, but they were never close friends. However, when Constable was eventually elected a full member of the Academy in 1829, it was Turner who brought him the good news, and he stayed talking with him into the early hours. ……

xxxxx…… The largest collection of Constable’s pencil and oil sketches can be seen in the Victoria and Albert Museum in London, including the full-scale sketches he made for the Hay Wain and The Leaping Horse. The National Gallery and The Tate Gallery also have a wide range of his completed works.