xxxxxFrom an early age Leopold II of Belgium was convinced that a country’s path to greatness lay in the possession of colonial territories. Unable to convince his government of this, he decided to go it alone. He formed the International Congo Society in 1879, and then commissioned the explorer Henry Morton Stanley to return to central Africa in order to gain rights over productive areas and the exclusive control of the rubber and ivory trades. This achieved, he obtained the support of the Berlin Conference (convened in 1884 to regulate the colonisation of Africa) and established the Congo Free State, a vast area, 75 times larger than Belgium, in 1885. He had always made it clear that his intention was to end the Arab slave trade in that area, and bring the benefits of civilisation to the native population, but once in power he exploited the land for its natural products and mineral wealth - particularly ivory, rubber and copper - and introduced a brutal regime via his Corps Publique. His colony became a vast labour camp in which flogging, torture, mutilation and mass killing became routine. The violence and the scale of these atrocities eventually attracted world attention. In 1904 a British consular official, Roger Casement, produced a harrowing report on the administration of the colony and eventually, in 1908, the Belgium government was persuaded to take complete control of the area. It became the Belgian Congo. 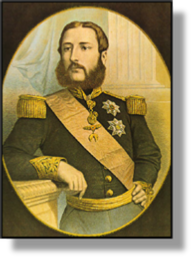 xxxxxLeopold II of Belgium succeeded his father to the throne in 1865. A strong-willed, ambitious man he had for many years urged his government to become a colonial power, arguing that overseas territories not only provided new markets and valuable raw material for the country’s developing industries, but also gave the nation a stake in the world and the power and prestige that went with it. The Belgian government was not interested in the proposal, however, - nor the public at large - and he eventually decided to acquire a colony as a private undertaking before all the worthwhile areas had been snapped up by the likes of France and Britain.

xxxxxOne area which still remained open for his purpose was the Congo Basin in the centre of the African continent. Because of its jungle terrain and the dangers and diseases that went with it, this vast area had attracted few outside visitors. As we have seen, the Portuguese navigator Diogo Cao had reached the estuary of the Congo River in 1482 (E4) and, as a result, missionaries had visited the interior in 1490, and treaties had been made, though nothing had come of it. With this area in mind, in 1879 Leopold set up the so-called International Congo Society to civilize the peoples of the region by means of scientific exploration, legal trading and the elimination of the Arab slave traders. The following year the Anglo-American journalist Henry Morton Stanley - the man who had rescued the Scottish pioneer David Livingstone just a few years earlier - became the first European to travel down the River Congo, and this gave Leopold the opportunity he was looking for. Two years later the Society (Leopold in all but name!) commissioned Stanley to explore the region 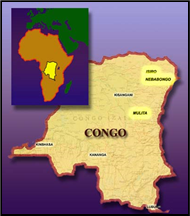 further in order to establish friendly relations with the tribal chiefs and set up trading stations. Privately, he was charged with gaining sovereign rights over productive areas, and exclusive control of the ivory and rubber trade. Over the next five years Stanley founded a number of settlements along the middle Congo, including Leopoldville, and made over 450 treaties with local chiefs, securing trading rights and ownership over vast regions on the south bank of the River Congo. By his return in 1884, Leopold was virtual master of what was to become the Congo Free State, a huge new realm deep in the heart of darkest Africa, and more than 75 times larger than his European kingdom.

xxxxxAll Leopold required now was international recognition of his claim to this vast territory. As we have seen, his opportunity to achieve that came later in 1884 at the Berlin Conference, convened in the November with the specific task of regulating European colonisation and trade within Africa. Organised, as we have seen, by the German chancellor Otto von Bismarck, it was held amid growing international concern about a new phase of colonial activity within the continent. In addition to Leopold’s own ambitions in central Africa - dating from the mid 1870s -, the French had occupied Tunisia and declared sovereignty over the western region of the Congo Basin in 1881; the British, as we have seen, had virtually taken control of Egypt in 1882, and Portugal - the country which had called for the convening of the Conference - was laying claim to the region around the estuary of the River Congo on the grounds of treaties made in the 15th century - a claim which, if upheld, would deny both Leopold and the French access to the Atlantic Ocean. But Portugal’s claim was not upheld, and the 14 nations attending the meeting, impressed by the idea of a colonial area expressly created to bring science, civilisation and Christianity to its native inhabitants, gave Leopold’s project its blessing. He was recognised as the sovereign of the Congo Free State in July 1885, a personal kingdom of more than 900,000 square miles, neutral in status and open to the trade of all nations.

xxxxxBut not surprisingly for that day and age, the light of civilisation - symbolised by a bright yellow star on the new nation’s flag - never reached the middle of the “Dark Continent”. Like many colonial powers before Leopold, and most since, he was primarily motivated by greed. He leased vast areas of land to foreign companies dealing in ivory, rubber and minerals, imposed heavy taxes upon them, and took 50% of their profits. In the early 1890s he seized the land occupied by Arab and Swahili traders along the Lualaba River, and foiled a plan by the British empire builder Cecil Rhodes to take Katanga, an area particularly rich in copper. An expedition financed by Leopold and led by a Canadian mercenary named Captain William Stairs reached Katanga before the British had made a move, and killed the tribal chief Mwenda Misiri. A second expedition then consolidated Leopold’s hold on the entire region, enabling the mineral wealth to be sold for enormous profits.

xxxxxAnd this legalised robbery was enforced by violence. The exploitation of the land and its products was accompanied by a harsh, brutal regime, carried out by the concessionary companies and Leopold’s Force Publique, a private army that terrorised the native population. The state became a vast labour camp in which flogging, torture, mass killing and widespread mutilation were routine. And the 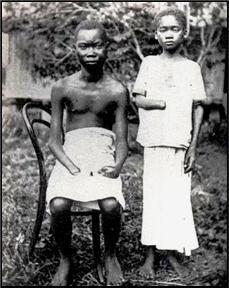 harvesting of wild rubber became a particularly gruesome industry following the invention of the pneumatic tyre in the mid-80s. The demand for latex rocketed and was met by the “rubber atrocities”, savage measures to increase production. If a village did not come up with its required quota, its dwellings were burnt down, the women hostages were slaughtered, and the children mutilated. A common practice was cutting off the right hand of youngsters (illustrated) as proof that discipline was being maintained. The killings, plus death from small pox and sleeping sickness, devastated the population. Such acts of cruelty and brutality, it must be said, were not uncommon in the colonial territories of other nations at this time, but it was the degree and scale of such depravity that made the Congo Free State such a blood-curdling example of man’s inhumanity to man.

xxxxxAs early as 1888 news of these atrocities began to leak out. In that year Cardinal Charles Lavigerie, a French missionary, gave a sermon in Paris which shocked his audience by its gory account of the Congo slave trade. This prompted Leopold to convene an international conference in Brussels in 1889-1890 in which he promised to stamp out the Arab slave trade and the crimes it engendered in return for the right to tax imports! But the atrocities continued and brought further condemnation in 1891 when a British-born trader, Charles Henry Stokes, was arrested on a charge of illegal trading and hanged the next day. Questions then began to be asked about the cruel treatment being metered out to natives from British colonies who were working in the Congo Free State. 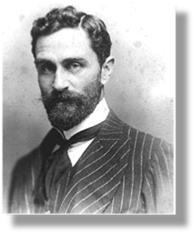 xxxxxMatters came to a head in 1900 when a native uprising was mercilessly crushed and details of flogging, mutilation and murder were circulated. Leopoldxattempted to silence the press, but the following year a former shipping clerk named Edmund Dene Morel (1873-1924) began to openly criticise the regime in a weekly newsletter he set up called The West African Mail. Suchxwas the mounting evidence against the Congo Free State that in 1903 the British government called for international action, and sent the Irishman Roger Casement (1864-1916) (illustrated), their consul in the Congo, to investigate the charges being made. His damning 62-page report, published in 1904, confirmed in graphic detail the mistreatment of the native population and the suffering arising from a systematic regime of brutal exploitation. Eventually in November 1908 the Belgium government bowed to international pressure and took over the administration of the Congo Free State in return for £3.8 million, given in recognition of Leopold’s “sacrifices” on behalf of the nation! Renamed the Belgian Congo, there was a marginal improvement in the life of the native population, but they were still regarded as a source of cheap labour. The country gained its independence in 1960 as the Republic of Congo, was renamed Zaire (“big water”) in 1971, and given its present title, the Democratic Republic of Congo in 1997.

xxxxxApart from his infamous venture into colonialism, Leopold is remembered today for the palatial public buildings he erected in Brussels, Ostend and Antwerp - financed by his ill-gotten gains - and his concern to build up the country’s military defences as a necessary adjunct to Belgian neutrality. In 1887 he persuaded parliament to carry out the fortification of Liege and Namur, but his efforts to obtain universal conscription were not successful until the year of his death. 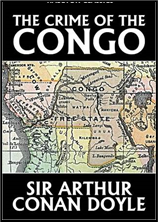 xxxxIncidentally, in 1904 Morel and Casement formed the Congo Reform Association in Britain to fight for much-needed reforms in the government of the Congo Free State. This organisation was supported by a number of well-known writers of the time. These included Joseph Conrad - whose novel Heart of Darkness of 1899 was based on his experiences as a merchant seaman on the Congo River; the American author Mark Twain, who produced his powerful political satire King Leopold’s Soliloquy in 1905; and Arthur Conan Doyle, who wrote The Crime of the Congo in 1909. Toxthese powerful indictments must be added The Congo by the American poet Nicholas Vachel Lindsay, produced in 1914 and with the lines: Listen to the yell of Leopold’s ghost, Burning in hell for his hand-maimed host, Hear how the demons chuckle and yell, Cutting his hands off down in hell. ……

xxxxx…… Roger Casement, the British consular official who, in 1904, drew up the harrowing report on conditions in the Congo Free State, was awarded a knighthood in 1911 and hanged as a traitor five years later. An ardent Irish nationalist, when the First World War broke out in 1914 he went to Germany in the hope of raising a force of Irish war prisoners to fight against the British. His mission was unsuccessful, but when he returned to Ireland in a German submarine he was captured on landing. He was taken to London, tried for high treason, and hanged.