xxxxxThe Cistercians were members of a monastic order which broke away from the Benedictines in 1098 to form a stricter order at Cîteaux in Burgundy. Bernard of Clairvaux became a monk at Cîteaux in 1113 and, appointed abbot at Clairvaux two years later, did much to encourage recruits to the order, which numbered 300 monasteries by the 1150s. Later he strongly opposed the views of the theologian Peter Abelard, and he played an important part in the launching of the Second Crusade. The Order went into decline during the 13th century and eventually led to break-away groups, such as the Trappists in 1662 (C2). 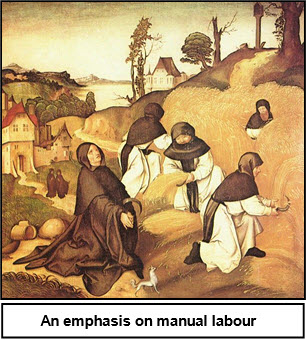 xxxxxThe Cistercians were members of a Roman Catholic monastic order, founded by St. Robert de Champagne, abbot of Molesme, on Palm Sunday 1098. He and a small number of fellow monks left the Benedictine abbey of Molesme and founded a stricter, more austere form of the Benedictine order at a secluded area known as Cîteaux, near to Dijon in Burgundy. Other monasteries were later founded on the same harsh rules. In the Middle Ages the Cistercians, often known as White Monks because of the white habits they wore, played an important part in improving farming methods, obliged as they were to work as labourers in the field.

xxxxxIn 1113 the Frenchman Bernard of Clairvaux became a monk at Cîteaux and, two years later was appointed abbot at Clairvaux, a daughter house of Cîteaux. Here his firm convictions and saintly personality did much to encourage recruits to the Cistercian order which, by the mid 1150s, could boast of some 300 monasteries. 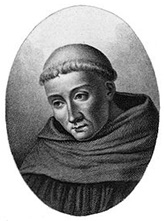 xxxxxLater in life he strongly opposed the views of the theologian Peter Abelard, though some degree of compromise was reached between them before Abelard's death in 1142. Three years later he played an important part in the launching of the Second Crusade. His powerful preaching brought an immense response, though the crusade itself ended in failure.

xxxxxAfter many successful years, the order went into decline as from the 13th century, and the lowering of standards within monasteries resulted in the creation of break-away groups. As we shall see, the most notable of these reformed versions was established at the Cistercian abbey of Notre Dame de la Trappe, Normandy, in 1662 (C2), its members becoming known as the Trappists. 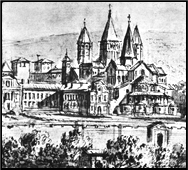 xxxxxIncidentally, in his work, Bernard of Clairvaux was much influenced by the example set by the monastery of Cluny in the tenth and eleventh centuries. Situated north-west of Lyons in southern France, this became a centre for the reform and spiritual regeneration of Western monasticism. The monks of Cluny lived in silence, sufficed on a simple diet, and observed strict rules of chastity.

The Cistercians: by the German painter Jorg Breu the Elder (c1475-1537), contained in The Life of St. Bernard of Clairvaux, 1500. Bernard of Clairvaux: illustration from A Short History of Monks and Monasteries by the American writer Alfred Wesley Wishart (1865-1933), published 1900, artist unknown. Cluny: drawing by the French artist Jean-Baptiste Lallemand (1716-1803), 1773.