xxxxxThe Jurchen (or Jin) nomads founded the Chin dynasty in northern China in 1122 and, just four years later, drove the Song dynasty southwards across the River Yangtze. The Song dynasty dated from 960 and, over the years, had gained fame for its cultural achievements and its advances in commerce and industry. By the 1100s, however, the empire was beginning to fall apart, mainly through corruption. The invasion of the Jurchen was the last straw, although, as we shall see (1260 H3), the Song dynasty managed to survive in the south until overthrown by the Mongols in 1279.

xxxxxHaving overthrown the Liao empire in Manchuria but a few years earlier (1115), the Jurchen (or Jin) nomads then moved southwards and founded the Chin dynasty in North China in 1122. Four years later they went on to sack Kaifeng, the capital of the Song dynasty, and drive the Song south across the Yangtze. They eventually advanced their rule as far south as the River Huai. (See detailed map below)

xxxxxBy the reign of Sung Hui-tsung, the last but one 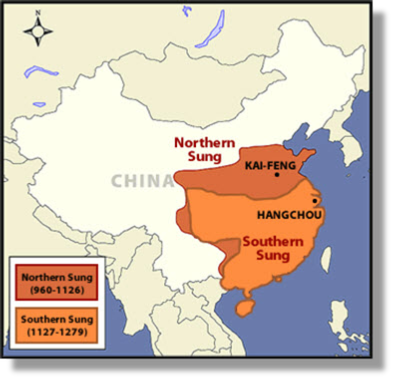 Emperor of the Northern Song (1101-1126) - shown brown on the map - the empire was beginning to fall apart, troubled from within by corruption and conspiracy and attacked from without by nomad tribesmen. Sung-Hui-tsung attempted to buy off the greatest threat to his borders, the Jurchen. They were given a large ransom - mainly made up of gold, silver and silk - but soon afterwards they returned and drove the Song out. The emperor - who, incidentally was an accomplished artist and had acquired over 6,000 paintings for the imperial art gallery - was taken prisoner to Manchuria and he died there in 1135.

xxxxxThe invasion of the Juchen was a serious blow to the Song dynasty as a whole, but the Southern Song (shown orange on the map) managed to survive. As we shall see (1260 H3), it continued to rule from Hangzhou (Hangchow) until overthrown by the Mongols in 1279. Founded in 960, the dynasty became famous for its cultural achievements, particularly in poetry, drama, porcelain ware and landscape painting. They also took steps to centralise power and regulate the economy of their empire. Commerce expanded with the establishment of trade guilds and the use of paper currency. In addition, advances were made in shipbuilding and the making of clocks and firearms.

THE CHIN AND SONG DYNASTIES  (H1) 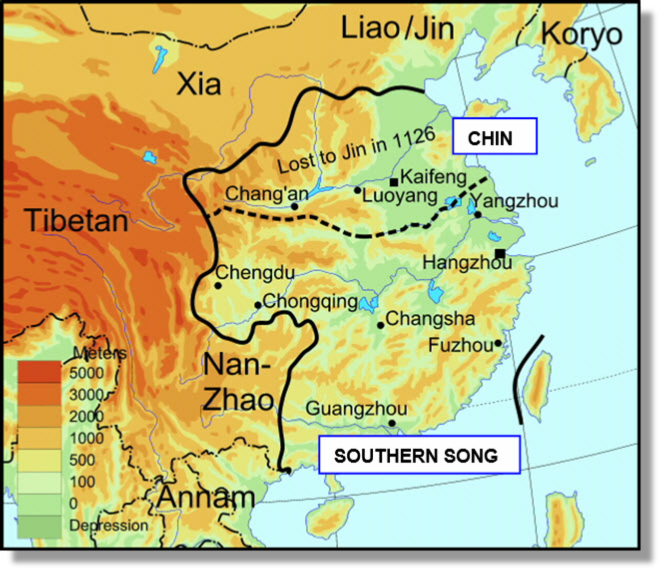