xxxxxFollowing the overthrow of the Ming dynasty in 1644 (C1), the first great emperor of the Manchu dynasty was K’ang-Hsi. Determined to unify his empire, in 1673 he launched an attack upon independent warlords in the south, and by 1681 had gained control over the whole of China. He then embarked on a policy of expansion. In 1683 he invaded and conquered the island of Taiwan, and then began an assault against the Russians, who were building a string of forts along the River Amur in the north. Here he was not so successful but, as we shall see, by the Treaty of Nerchinsk in 1689 (W3), the border was settled and this enabled him to cast his eyes on Outer Mongolia and Tibet. He also did much to stimulate the Empire’s economy, encouraging trade and improving the waterways, including the Grand Canal. A cultured and tolerant man, he learnt much from the Jesuit missionaries and, with their help, made the first map of the Empire, a work later used by the Frenchman cartographer Bourguignon d'Anville. But in the arts, his reign is best remembered for the quality of its Chinese porcelain, especially following the appointment of the brilliant craftsman Ts'ang Ying-hsyan in 1682. 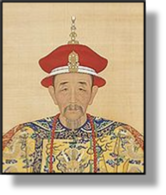 xxxxxAs we have seen, it was in 1644 (C1) that the Ming dynasty finally came to an end - apart from some pockets of resistance in areas of south China and on the island of Taiwan. It was in that year that the then emperor, Ch'ung-chen, committed suicide and a Ming commander invited the Manchu to restore law and order. This they did, but, having occupied the capital, Peking, they decided to stay on and take over the Chinese empire in the name of the Manchu (or Ch’ing) dynasty.

xxxxxIts first great emperor, if not its greatest, was K'ang-hsi (illustrated). He was only seven when he came to the throne in 1661, but by the age of 15 he showed that he was firmly in control. When Oboi, one of the four Manchu courtiers who, until then, had administered the country, attempted to take the government into his own hands, he acted swiftly, having him openly arrested in the Audience Room in a dramatic show of strength. A man with a simple life style, he kept his court spending to a minimum - often paying for expenses out of his own pocket - and he actually managed to reduce taxation, an achievement few leaders can claim. 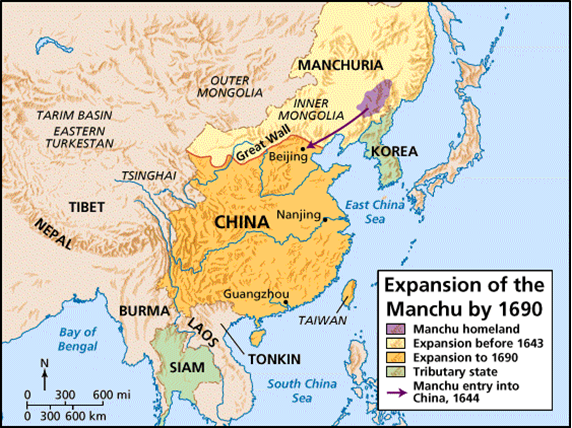 xxxxxThe title he assumed, K’ang-hsi, means "Peaceful Harmony" but, in fact, there was very little that was peaceful or harmonious about the foreign policy he then embarked upon. His first major concern was the situation in southern China, where three warlords, having played their part in subduing the Ming forces, had then settled in large areas of the south and south-west, complete with their own private armies. Despite their assurances of loyalty, in 1673 the emperor launched an attack upon them in a war which came to be known as the Revolt of the Three Feudatories. Because of early imperial setbacks, the three generals were soon joined by the Burni of the Chahar Mongols - a people of Inner Mongolia - but the determination of the emperor and his superior strategy eventually won the day, and in 1681 a victorious Ch'ing army entered the city of Kunming in the province of Yunnan. The dynasty had survived and, furthermore, had consolidated its hold over the whole of China.

xxxxxK'ang-hsi then turned his attention to the island of Taiwan where, over the years, the Cheng regime - a family originating from the province of Fukien - had built up a sizeable fleet and was literally 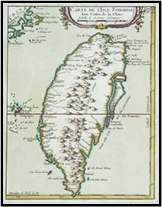 controlling the entire trade operating out of the China Sea. In 1683, taking advantage of a family feud which had broken out among the Cheng and left the strait to Taiwan virtually unprotected, he despatched an invasion force which, having achieved a landing, quickly gained the upper hand. Once in command of the island, the emperor showed that he was more than a competent soldier. He at once lifted all restrictions on coastal trade, and opened up four ports to international commerce, including the port of Canton. The impact of these measures was immense. Soon the whole of this area had developed into a thriving industrial complex, based on the export of silk, tea and chinaware.

xxxxxThe emperor's sound grasp of economic needs also paid dividends internally. Earlier he had put in hand work to stop the repeated flooding of the Huang Ho River. By 1683 this vital waterway had been dredged and its banks fortified. At the same time he made vital repairs to the Grand Canal which linked the Huang Ho with the lower reaches of the Yangtze River, and thus made possible the smooth passage of rice from its production in the south to the heavily populated areas of the north.

xxxxxAnd it was to the North that K'ang-hsi next turned to face a growing threat. Here the Russians, having reached the Amur River, were building a chain of fortresses after reoccupying two they had abandoned earlier at Albazin and Nerchinsk. Not one to stand on ceremony, the emperor launched an attack on Albazin and took it within a few days, but the following year he lost his hold on the fortress and was forced into a protracted siege. As we shall see, this was to lead to negotiations with the Russians and the signing of the Treaty of Nerchinsk in 1689 (W3), a settlement that defined the Russo-Chinese border and was ratified by the new Tsar, Peter I, when he assumed power later that year. This treaty enabled K'ang-hsi to continue his expansionist policy. Having secured his northern border, he then cast his eyes on Outer Mongolia and the land of Tibet.

xxxxxK'ang-hsi was an educated man who was anxious to learn from other cultures. In 1677 he had his own special study made in the Forbidden City where he could meet to discuss a variety of subjects with the scholars of his day. He also learnt a great deal from Jesuit missionaries - especially in mathematics - and it was with their aid that he compiled an accurate atlas of the Empire, a map on which the Frenchman cartographer Bourguignon d'Anville based his own New Atlas of China, published in 1737. Indeed,

the Emperor's performance on the battlefield might well have been less successful without Jesuit guidance on the making of cannons! In return, he allowed them to spread the Roman Catholic faith, gave them residence within the imperial city, and permitted them to build a church in Peking. Later, however, such tolerance led to conflict when the more austere Dominicans and Franciscans arrived on the scene.

xxxxxIn the field of arts and craft, it is the production of Chinese porcelain for which the reign of K'ang-hsi is best remembered. As we shall see, in 1682 the emperor appointed the outstanding craftsman Ts'ang Ying-hsyan as the director of imperial pottery. Under his talented guidance the industry obtained a new lease of life, producing a quality of workmanship not seen for more than a century.