xxxxxThe Chimu people of South America settled in northern Peru in about 1250. Around 1370 they began to move southwards, making substantial gains along the coast under the leadership of their legendary ruler Nancen Pinco. From their huge city of Chan Chan they developed a network of roads and a vast irrigation system. They lived in huacas (mud-brick mounds), produced fine work in metal, pottery and textiles, and developed a means of writing or accounting by using coloured beans. As we shall see, in about 1466 (E4) the kingdom was overrun by the Incas, advancing from the south. They absorbed much of the Chimu culture, and made good use of the kingdom's roads and canals. 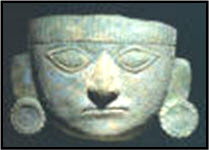 xxxxxIt was in about 1250 that the Chimu people, natives of South America, settled along the north coast of modern-day Peru. By around 1370 their number had substantially increased, and they began to expand southwards, conquering land as far down the coast as Casma and Paramonga. The legendary Chimu ruler Nancen Pinco, is said to have led the advance, having begun his reign at this time. 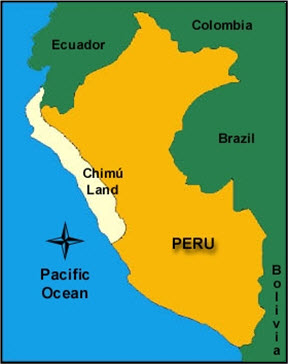 xxxxxTheir civilisation was based on agriculture and depended upon a network of roads and a vast irrigation system. Somewhat like the Pueblo people in Central America, they built enormous mud-brick mounds (known as huacas) as bases for their palaces and temples. Their major city of Chan Chan, situated on the coast near Trujillo, was nearly fourteen square miles in size. At its centre there were ten walled citadels, each with its own garden, pyramid temple, living quarters, water tank and burial places. These vast quadrangles were for the ruling classes. The bulk of the population lived outside these confined areas in far less sumptuous dwellings.

xxxxxThere is clear evidence that the Chimu people were socially advanced. They produced fine work in gold, silver and copper - all of which were in plentiful supply - and pottery and textiles were manufactured on a large scale. Coloured patterns painted on beans might well have provided a means of writing, or used to record accounts and keep a log of food supplies. 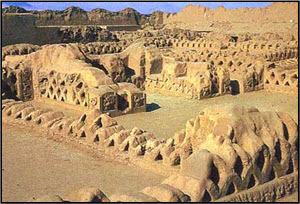 xxxxxIncidentally, the Chimu capital of Chan Chan (illustrated) is now deserted due to lack of water, but its massive walls and huge layout of streets, still containing large living blocks, pyramid temples and water tanks, provide one of the world’s most important archaeological sites.

xxxxxAs we shall see, in about 1466 (E4), the Chimu kingdom was overrun by the Incas advancing from the south. They were able to absorb much of the Chimu culture, and also to make direct use of the kingdom’s infrastructure of roads and irrigation canals.