xxxxxAs we have seen, the great Chinese leader K'ang-hsi came to power in 1661. During his reign he captured Taiwan, settled the border with Russia by the Treaty of Nerchinsk in 1689 (W3), and then went on to conquer Outer Mongolia and Tibet. His grandson, Ch'ien-lung, whom he groomed for leadership, became emperor in 1736 and, in the early years, fulfilled his promise, bringing the empire to its greatest size and strength. By his "Ten Great Campaigns" he crushed a revolt in Tibet in 1752, and then took over the vast area of Sinkiang. He was a great patron of the arts - particularly painting and calligraphy - and encouraged skills in glass, porcelain, jade, ivory and lacquer. However, Roman Catholicism remained banned, he imposed a censorship to suppress anti-Manchu writings, and in 1793 (G3b) he rejected any expansion of trade with the West. The last 20 years of his reign saw a decline in the Empire's fortunes. 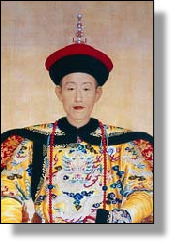 xxxxxAs we have seen K'ang-hsi, one of the greatest leaders of the Manchu (Ch’ing) dynasty, came to power in 1661. In 1682, having strengthened his hold on China, he took over the island of Taiwan and then, by the Treaty of Nerchinsk in 1689 (W3), settled his border with the Russians in the north. In 1696 he crossed the Gobi desert and conquered Outer Mongolia. Then in his final expedition, some 20 years later, he incorporated Tibet into his empire. But it was under Ch'ien-lung, his grandson (illustrated), the dynasty's fourth emperor, that the empire reached the full extent of its political power and territorial expansion. Marked out by K'ang-hsi as a worthy successor to the throne, he was especially educated with this in mind. In many ways, and certainly in his early years, he did not disappoint. 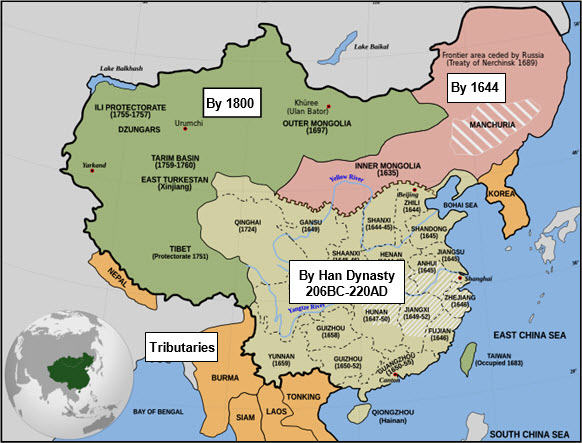 xxxxxHe succeeded his father, Yung Cheng, in 1736 and reigned for 60 years. By means of what came to be known as the "Ten Great Campaigns (or Victories)", he rapidly crushed a serious revolt in Lhasa, Tibet in 1752, tightening his grip on the country, and appointing high commissioners to reduce the power of the spiritual leader, the Dalai Lama. He then went on to overrun the vast region of Sinkiang in the north-west. The conquest of this area increased the empire by some 600,000 square miles, and virtually put an end to the incursions of Turks and Mongols which had constantly threatened the empire from this remote corner. There followed attacks on Burma and Cochin China, and by the end of his reign practically all of east Asia, with the notable exception of Japan, acknowledged China’s supremacy.

xxxxxLike his grandfather, he greatly encouraged the development of the arts - notably in painting and calligraphy - and his interest in dynastic and political history attracted thousands of scholars to his court. He wrote both prose and poetry, and encouraged artistic skills such as porcelain and glass making, and workmanship in jade, ivory and lacquer. He himself amassed a library of some 4,000 paintings and studies in calligraphy, and these were later catalogued. He also encouraged the building of a large number of temples and palaces, and was responsible for the embellishment of Yuan-Ming Yuan, his imperial palace just outside Peking. Illustrated below is artwork of his reign:

xxxxxBut though enlightened in many ways - and especially appreciative of the skills shown by some of the missionaries at his court - he continued the ban on Roman Catholicism, and writings which were in any way anti-Manchu were destroyed. Nor did he have any interest in expanding trade with the West. As we shall see, Lord Macartney's trade mission in 1793 (G3b) was given short shrift. And by this date his empire was in decline - the population growth was outstripping food production, the treasury was almost empty, and there was corruption in high places. But the ending to this great Chinese dynasty was to be slow in coming.

xxxxxIncidentally, alarmed at the rapid growth in population, Ch'ien-lung issued an edict in 1740 decreeing that every odd piece of soil was to be cultivated "on top of mountains or at the corners of the land", no matter how little the return.