xxxxxBorn in London, Geoffrey Chaucer began his working life in royal service and quickly rose to high office in the "civil service". He took part in a number of diplomatic missions to the continent, and in 1374 was appointed Controller of Customs at the Port of London. It was about this time that he began to make his name as a poet and storyteller. As a writer he is best known, of course, for his Canterbury Tales, begun in about 1387. By way of a well-woven series of stories - full of humour and wit - he follows a band of pilgrims as they make their way from London to the shrine of St. Thomas Becket in Canterbury Cathedral. The diverse and colourful characters who make up this group are skilfully drawn, and their individual tales cover a wide span of subjects. Particularly entertaining is the Prologue. Among his other works are The Book of the Duchess, an allegorical dream poem, the Life of Good Women, and the love story Troilus and Cressida. His work in the vernacular had a profound influence on the development of English literature, especially on the Elizabethan dramatists. He became a knight of the shire and a member of parliament in 1386 and, under Richard II, his final appointment was clerk of the king's works. He was buried in Westminster abbey, the first “occupant” of Poets’ Corner.

xxxxxThe English poet Geoffrey Chaucer was born in London, the son of a wine merchant. His father, who also acted as deputy to the king’s butler, secured him a post as a page in the household of Lionel, Duke of Clarence, one of the sons of Edward III. Intelligent, trustworthy and hardworking, he quickly made his mark. He served for a time in the French wars, and on being taken prisoner at the siege of Rheims in 1359, his ransom was paid in part by the king. 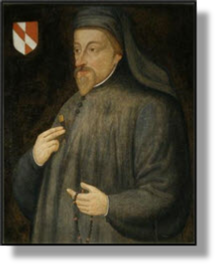 xxxxxHe then returned to the king’s service and, in 1366, married a noblewoman, an acquaintance and later relative of John of Gaunt, and this doubtless advanced his career. Under the patronage of the king’s brother, he quickly rose to high office in what we would now call the civil service. He travelled widely on behalf of the Crown, taking part in diplomatic missions to France, Spain and Italy and - probably as a reward for his services - he was appointed Controller of Customs at the Port of London in 1374, a post which carried with it a rent-free house over Aldgate in London. It was about this time that he entertained distinguished members of the court and began to make his name as both a poet and a story-teller.

xxxxxIn 1385 he appears to have moved to Greenwich, possibly prompted by the emergence of a baronial party hostile to the king and his benefactor John of Gaunt. However, such was his standing here that he was promptly appointed a justice of the peace for Kent and, in 1386, became a knight of the shire, able to take his place as a member of parliament. His final post in public service came In 1389 when Richard II, now back in command, made him clerk of the king’s works, overseeing the repair and maintenance of such royal buildings as Westminster Palace and the Tower of London. 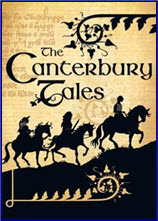 xxxxxIn 1391, as a step towards full retirement, he accepted the position of deputy forester in the king’s park at North Petherton in Somerset. It was during this period that he became a close friend of the Earl of Derby, the son of John of Gaunt and the future king Henry IV. A year before his death he came back to London and lived in a house in the garden of Westminster Abbey. It was here that he died in 1400. He was buried in the Abbey, his tomb being the first to be placed in the area now known as Poets’ Corner. His wife had died in 1387, and he left two sons and two daughters.

xxxxxChaucer lived such a full and busy life as courtier, diplomat and servant of the Crown that it is difficult to see how he found time to write, but he certainly did. His major work and the one by which he will be forever remembered, of course, is The Canterbury Tales, probably begun around 1387. In the format of a frame story (like Boccaccio’s Decameron), the work tells of thirty one pilgrims (including the author) who assemble at the Tabard Inn in Southwark - a real inn kept by mine host Harry Bailey. From here they start on a pilgrimage to the shrine of Saint Thomas Becket in Canterbury Cathedral. To make the journey more entertaining, each tells two stories on the way and two on the way back. In fact, only twenty-four tales were written, and three of these were unfinished. 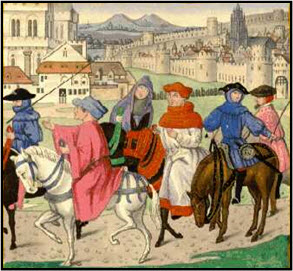 xxxxxThe colourful characters who make up this jovial party are chosen from all walks of life and are skilfully drawn. They provide a kaleidoscope of human emotions and a fascinating insight into human nature in the raw, its failures, triumphs, joys and sorrows. The characters range from the humble ploughman and carpenter to the lawyer and “the parfit, gentil knight”; the themes cover a wide span, such as marriage, sex, religion, hypocrisy and various aspects of love; and the order of the tales is so arranged as to make the most out of the interaction between the differing personalities and the diversity of their views.

xxxxxHowever, as entertaining as the tales are by such a varied cast - such as the talkative Wife of Bath, the elegant prioress, the merchant and lusty miller - perhaps the most brilliant and most amusing part of the work is the General Prologue, providing as it does brief but vivid sketches of the characters and a realistic glimpse into medieval England at this time, warts and all. The reading of the Prologue is recommended, together with a couple of the stories, perhaps that of The Wife of Bath and The Knight’s Tale. 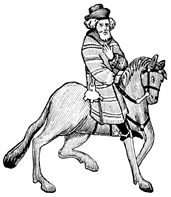 xxxxxThroughout the telling of the tales runs the author’s humanity, good humour and wit - ingredients which play so vital a part in the total composition - but there is, too, a serious side to the work. Whilst he reveals contempt for the Roman Catholic Church via his two characters Summoner and Pardoner, he holds fast to the Christian values, epitomised in the country gent (illustrated), the physician, the prioress and, above all, the chivalrous knight. Indeed, the work ends with a retraction in which Chaucer casts off the vanities of this world for the promises of the next.

xxxxxAmong other works written by Chaucer is his Book of the Duchess, an allegorical dream-poem which, like all his early work, shows a strong French influence. It was written as an elegy for the Duke of Lancaster’s first wife Blanche who died in 1369. There is also a collection of tales entitled The Legend of Good Women (which includes Cleopatra and Dido) and The Parliament of Fowls, which attempts to understand the true nature of love. He is remembered, too, for his translations of Troilus and Cressida and The Knight’s Tale, both adapted from Boccaccio, and he is also thought to have had a part in the translation of the Roman of the Rose, the influential French poem of courtly love, begun by Guilllaume de Lorris in about 1225. The love story Troilus and Cressida, set against the background of the legendary Trojan War, is considered by some to be his masterpiece. In much of his writing he is influenced by Dante and Petrarch, as well as the Roman poet Ovid and the Roman philosopher Boethius.

xxxxxHis work in the vernacular had a profound influence on the development of English literature, both in the range of its poetic meters and the skill of its narrative. As we shall see, Shakespeare and the Elizabethan dramatists in particular owe much to his mastery of the language and his astute observation of society. He has rightly been seen as ushering in the dawn of the English renaissance. It is just a pity that, given the social turmoil into which England was thrown over the next eighty years or so, the sun took a little time to rise! 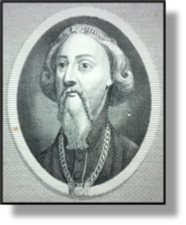 xxxxxTwo English poets, contemporaries and friends of Chaucer, deserve a mention. John Gower (1330-1408), possibly of Kentish origin, was an accomplished court poet and highly regarded by Chaucer. His best-known work, Confessions of a Lover, was written in English in about 1390, allegedly at the express wish of Richard II. It is a collection of tales describing the seven deadly sins and providing instruction on courtly and Christian love. His Voice of Complaint, written in Latin, describes the Peasants’ Revolt of 1381 in the context of class divisions.

xxxxxJohn Lydgate (c1370-c1450) was born in Suffolk and was trained as a priest at the monastery of Bury St. Edmunds. A disciple of Chaucer, he wrote an immense amount of poetry, and was popular in his day, mainly due to three works, the long narratives Troy Book of 1420, The Fall of Princes, and The Siege of Thebes, based on a old French romance, since lost. 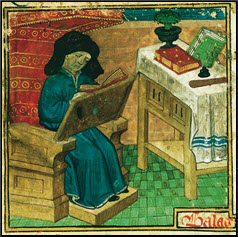 xxxxxFor his work The Book of the Duchesse, Chaucer leaned heavily upon the poetry of the French poet and musician Guillaume de Machaut (c1300-1377), particularly with regard to his technical innovations. His long poems are in the courtly-love tradition, and much of his poetic work has a musical accompaniment. In addition, he was an accomplished composer, and is now regarded as one of the finest in the fourteenth century. His compositions include 19 lays, 42 ballads, 21 rondeaux and a mass for four voices.

xxxxxHe was born at Machaut in Champagne in about 1300 and, as a young man, served in the household of King John of Bohemia. He accompanied the king on military expeditions, and enjoyed a life of adventure. In about 1337 he was appointed a canon of Rheims, and he remained there until his death in 1377. Well known and admired at court, his patrons included the king’s daughter, Bonne of Luxembourg, and King Charles V of France.