xxxxxAs we have seen, the Great Northern War which broke out in 1700 (W3) started well for the young king of Sweden, Charles XII. Despite the powerful alliance formed against him, he quickly forced the Danes into submission, trounced the Russians at the Battle of Narva, and drove the Poles out of Livonia. And by 1706 he had put a pro-Swedish candidate on the Polish throne. The following year, however, he invaded Russia, and his fortunes changed. Tsar Peter the Great had reformed his army on Western lines, and it won a resounding victory over the Swedes when they met at the Battle of Poltava in 1709. Charles managed to escape, but became a captive in Turkey, and did not return home until 1714. By this time another alliance had been formed against him. Ever defiant, he took a large army into Norway, but was killed at the siege of Fredrikshald in 1718. Charles proved a great military commander. He took his country to the height of its power, but he presided at its demise. As we shall see, by the Treaty of Nystadt in 1721 (G1), Russia became the dominant power in the Baltic. Sweden’s days as a European super-power were over.

xxxxxAs we have seen, the Great Northern War broke out in 1700 (W3). Despite a powerful alliance formed against him, the young king of Sweden, Charles XII, won a string of outstanding victories just three years after coming to power at the age of 15. Having seized Zealand and forced the Danes into submission in August of 1700, he turned on the Russians and, in the November, virtually destroyed their army, then laying siege to the city of Narva.

following year he launched a direct attack upon Augustus II, king of Poland and elector of Saxony, the third and final member of the coalition ranged against him. Having occupied Courland and driven the Poles out of Livonia, he crossed the River Dvina and, entering Poland, captured Warsaw and Krakow. Now anxious to make this country a secure base from which he could mount a decisive attack upon Russia, he set about the overthrow of Augustus himself. Itxtook six years, however, and a full-scale invasion of Saxony before Augustus agreed to relinquish his Polish crown in favour of Stanislaw Leszcyzynski, a pro-Swedish candidate (The Treaty of Altranstädt 1706). Sweden’s warrior king was now ready to invade Russia, but his long campaign in Poland had been used to good effect by Peter the Great, still smarting from his defeat at Narva. He had built a navy, carried out a thorough reform of his army on Western lines, and even nibbled away at some Swedish territory along the eastern Baltic coast. This time the Russians were not likely to be such an easy push-over. 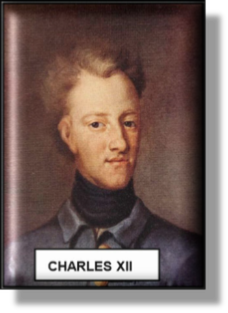 xxxxxAs we shall see, Charles launched his attack on Russia in 1707 and met with some success, but as he moved further inland supplies became scarce and the bitter winter conditions took their toll. Following the failure of a supply column to reach his depleted army, he was forced to abandon his advance on Moscow and turn into the Ukraine. Here he was met by a large Russian force and decisively defeated at the Battle of Poltava in 1709. It was a humiliating defeat for Sweden and marked the end of that country’s hopes of being a major European power.

xxxxxBut that was not how Charles saw it at the time. He, together with about a thousand men, had managed to escape from the battlefield and reach Moldavia in the south, part of the Turkish Empire. Once there he persuaded the Turks to declare war on Russia and, with their support, saw every prospect of a military come-back. But it was not to be. The Turks did take on the Russians and they did win a victory beside the River Pruth in 1711, but having gained control of Azov as a consequence, they withdrew from the conflict. It was perhaps not surprising, since no Swedish army ever arrived to support this alliance of convenience!

xxxxxMeanwhile, in northern Europe, the earlier coalition of nations formed against Sweden had been revived. They began seizing Swedish possessions along the Baltic coast, and these territorial advances were confirmed by their victory over the Swedes at Tonning, Holstein, in May 1713. Then in the following year the Russians advanced further. They defeated a Swedish fleet at Gangut (the first Russian naval victory of any size), occupied the Aland Islands, and threatened Stockholm itself.

xxxxxCharles was powerless to counter this threat. In his furtive attempts to regain Turkish support he had fallen out with his “hosts” and found himself a virtual prisoner. He did attempt to govern his country from his residence at Bender, but he had little success. He eventually managed to escape in 1714 and, travelling across Europe disguised as a “Captain Frisk”, he reached southern Sweden. Here, ever optimistic, he rejected all peace proposals and made plans to rebuild a coalition. As part of this scheme, he took a large army into Norway in 1718 and laid siege to Fredrikshald. It was here, later in the year, that he was fatally shot through the head. 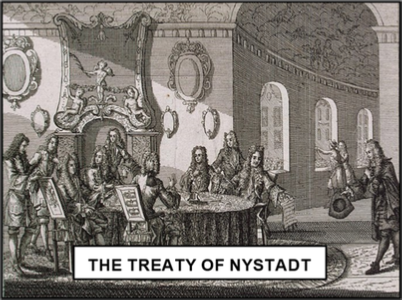 xxxxxCharles XII was an outstanding military commander and patriot. It must be said that in his early campaigns his success in battle owed much to the quality of his field commanders, but from the beginning of his reign he inspired all by his confident, decisive leadership. Furthermore, by the end of the Polish campaign in 1706 he had emerged as a brilliant general in his own right. He was a man of integrity and learning, and though he spent most of his reign in the pursuit of war, he did make some useful reforms in domestic administration. But Charles XII will be remembered, above all, as the Swedish monarch whose overriding ambition took his country to the very pinnacle of its power and then cut it down to an insignificant size, all in the space of twenty years. As we shall see, by the Treaty of Nystadt in 1721 (G1), Sweden was formally replaced by Russia as the dominant power in the Baltic, and was never to rise to such heights again.

xxxxxIncidentally, during a visit to London, the 18th century French writer and philosopher Voltaire met Fabrice, a man who had been a close companion of the Swedish monarch. This inspired him to write a well documented biography of the warrior king entitled Histoire de Charles XII. In it he contrasts the lives and fortunes of Charles and his rival Peter the Great, both men of great patriotic fervour. The one brought his nation tumbling down, the other founded a vast and powerful empire. ……

xxxxx…… When, following the Battle of Poltava, Charles was forced to take refuge in Moldavia, he was accompanied by the Cossack leader Ivan Stepanovich Mazepa. Earlier, Mazepa had supported Peter the Great of Russia against Turkey and Sweden, but in 1708 he joined forces with the Swedes and, as a consequence, shared in their defeat at Poltava in 1709. The Turks refused to surrender him up to the Russians - who were not a little angered by his treachery - and he died in Moldavia later that year. Both the English poet Lord Byron and the French novelist Victor Hugo based works on the career of Mazepa, as did the Russian composer Pyotr Tchaikovsky.