xxxxxBy the Treaty of Westphalia in 1648 (C1) Sweden emerged from the Thirty Years’ War as the dominant Baltic nation. On coming to power in 1654 Charles X planned to expand further. He attacked Poland, winning the Battle of Warsaw in 1656, but, alarmed by this success, his neighbours formed an alliance against him, and he had to retreat. Undeterred, he attacked Denmark and, gaining some land, launched a second attack in 1659, aiming to establish a unified Scandinavian state. This time, however, the Danes stood firm, held on to Copenhagen, and drove him back. He died the following year. But Sweden’s days of conquest were not over. As we shall see, the Great Northern War of 1700 (W3) was to provide the stage for the warrior king Charles XII, one of Europe’s greatest military monarchs. 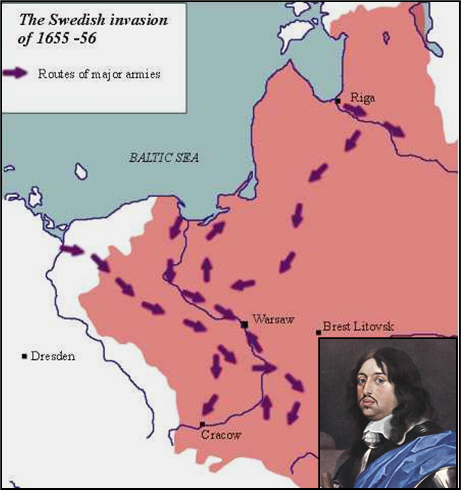 xxxxxAs we have seen, Sweden emerged from the Thirty Years War weary but triumphant. Despite the tragic loss of their charismatic leader, Gustavus Adolphus at the Battle of Lutzen in 1632, the entry of Roman Catholic France into the conflict three years later - bent on reducing the power of the Habsburgs at any cost - provided Sweden and the protestant cause in general with an unlikely but powerful ally. As a consequence, the Swedes went on the offensive again. They won the battles of Wittstock and Rheinfelden and, having swept over Austria and western Germany, marched in and occupied their neighbour Denmark. By the Treaty of Westphalia in 1648 (C1) Sweden was assigned certain Baltic provinces, thus gaining control of the Baltic Sea and becoming the dominant nation in that region.

xxxxxSuch was the position when the warrior King Charles X (illustrated) succeeded to the throne in 1654. The constant military campaigns had brought his country close to bankruptcy, but he was determined to expand at the expense of nations which had been more seriously weakened by the rigours of the Thirty Years' War. In 1655 he invaded Poland on a trumped-up charge that the Polish king, his cousin King John II Casimir, was planning to seize the Swedish crown. Formingxan alliance with the elector of Brandenburg, Frederick William, he won the three-day Battle of Warsaw in 1656, but the extent of his success alarmed neighbouring stat 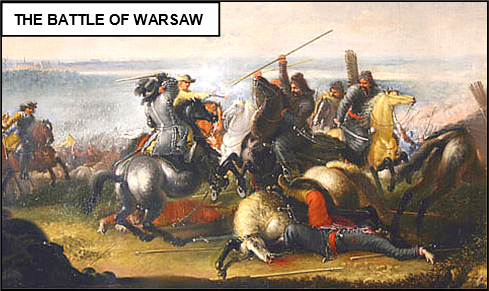 es. Denmark, Russia and the Holy Roman Empire declared war on Sweden, and Frederick William, having reached an agreement with the Poles, promptly joined them.

xxxxxIn the face of such an alliance, Charles was obliged to withdraw from Poland, but he now cast his eyes on Denmark. In a daring attack which has earned a place in military history, he led his troops over a stretch of water called the Belts - not usually frozen - and, seizing the province of Jutland, forced the Danes to surrender. Byxthe Treaty of Roskilde in February 1658, King Frederick III had to hand over all the land he held in southern Sweden, together with Trondheim and the island of Bornholm. 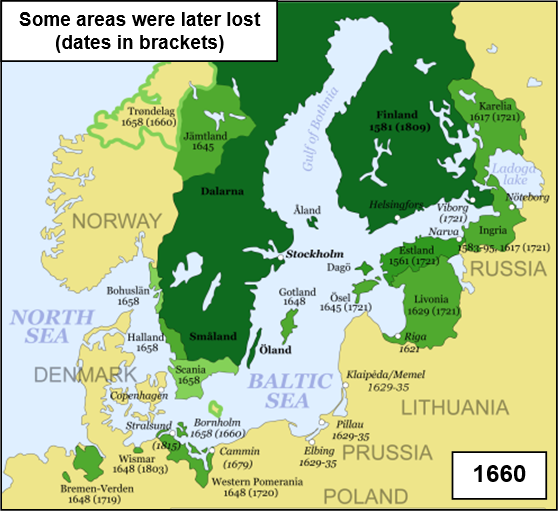 xxxxxSpurred on by this victory, Charles now sought the complete conquest of his neighbour in a bid to establish a unified Scandinavian state. In a surprise attack, he seized Funen and attacked Zealand, but this time the Danes stood firm. They put up an heroic defence of Copenhagen in the winter of 1659, led by Frederick III, and the Swedish king was forced to retire. He died soon afterwards, and then a series of treaties in 1660 and 1661 - the peace settlements of Oliva, Copenhagen and Kardis - brought an end to the conflict (often known as the First Northern War).

xxxxxThe Swedes retained much of the land seized from Denmark, but they returned Trondheim and the island of Bornholm, and their hopes of a united northern state were not realised. However, as we shall see, the days of Sweden's greatness were far from over. The Great Northern War, which broke out in 1700 (W3) was to provide the stage for the entry of Charles XII, one of the greatest military kings in European history.