xxxxxBorn in Paris, the son of a carpenter, Jean Baptise Chardin never left his native city. He had a natural talent as an artist, and was influenced by earlier Dutch artists, such as Pieter de Hooch. Unlike his contemporaries - such as Watteau and Boucher - he showed no interest in light hearted pastoral scenes, but concentrated his efforts on depicting the items and events of the everyday life of the petite bourgeoisie. He gained recognition in 1728, and was admitted to the French Academy that year. From then on his brilliant still lifes- like Kitchen table with a shoulder of mutton - and his figure paintings, such as Lady Sealing a Letter or The Scouring Maid, swiftly gained in popularity. The king, Louis XV, bought some of his works, as did royalty and aristocracy across Europe, and his fame was greatly enhanced when a vast number of engravings were made of his best known paintings. As a technician, he was a master of tone and light, and was not so much interested in detail as in shape, colour and texture. He achieved warmth and realism in his work by his thick layered brushwork and luminous glazes. Towards the end of his life, interest in his subject matter began to wane. Because of this, and his failing eyesight, he turned to working in pastels. He proved brilliant in this medium but, in fact, it was not until the middle of the 19th century that art critics, including the Goncourt brothers, realised his extraordinary talent. 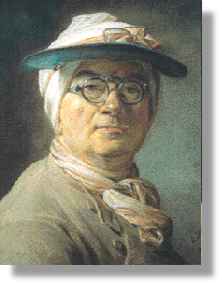 xxxxxThe French painter Jean Baptiste Chardin, in contrast to the highly Rococo pastoral scenes of his fellow artists - such as Watteau, Boucher and Fragonard - found his inspiration in the ordinary scenes of domestic life, much in the Dutch tradition. A master of tone and light, he excelled in this type of work, and is today regarded as one of the most successful exponents of still-life and genre painting in the 18th century, if not beyond.

xxxxxHe was born in Paris, the son of a carpenter, and as far as we can gather, never left his city, or, indeed, his district. He had a natural talent and, influenced by the earlier Dutch artists - such as Pieter de Hooch - devoted his skill to depicting the simplest of objects and the most humblest of people in the daily life of the petite bourgeoisie. It was in 1728 that two of his early paintings, The Skate and The Buffet, exhibited at an outdoor exhibition for young artists, gained him admittance to the Royal Academy of Arts and Sculpture as a painter of flowers, fruit and genre subjects. He was soon making his name with some brilliant works of still life and figure painting, such as Kitchen table with a shoulder of mutton, Lady Sealing a Letter, The Scouring Maid, and the Governess. These homely kitchen and drawing-room scenes were glimpses of a life 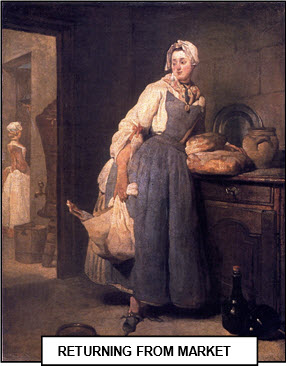 that many could appreciate. As a contemporary pamphlet put it, they were part of every housewife's daily routine.

xxxxxIn 1740 Chardin met the king, Louis XV, (who purchased a number of his works), and within a few years he was at the height of his career. His scenes of calm family life, whether it be men and women at work, or children at play, proved particularly popular among the royal houses and aristocrats of Europe - a little surprisingly, one might think, considering the "class" they portrayed. Furthermore, they became more widely in demand when a vast number of engravings were made of his pictures and distributed across the continent. In 1752 the king granted him a pension, and, a few years later, he was given a lodging place within the Louvre. Such was his standing that in 1755 he was elected Treasurer of the Academy, and entrusted with the task of deciding how the paintings should be hung in the salon. 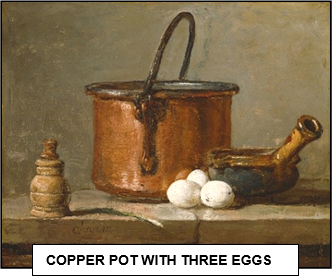 xxxxxIn his portrayal of everyday objects and modest events, his painting was somewhat ahead of its time. He was not so much concerned with detail as with shape, texture and the harmony of colour. His exquisite still-life, illustrated here, shows a structured approach to design, and this, combined with the use of broken colour and a soft, all pervading light (a Rococo feature, in fact), captures the beauty to be found in the humblest of objects. Here and in his figure painting, the warmth and realism achieved are conjured up by his thick, layered brushwork and his luminous glazes. Little wonder, perhaps, that the philosopher Denis Diderot, in his art criticism, should describe Chardin as the "great magician". 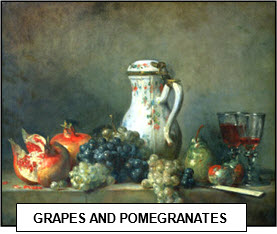 xxxxxBut he was not to enjoy fame or happiness in the latter part of his life. The subject matter of his work began to lose favour in the art world. His responsibilities within the Academy were slowly whittled down, and his pension was reduced. Meanwhile in his home life he suffered a personal tragedy when his son, with whom he had quarrelled, committed suicide - so it is believed - while in Venice in 1767. With his eyesight failing, he turned to the use of pastels. He showed outstanding talent in this new medium - clearly to be seen in his self-portrait above - but this was not really appreciated for many years. Indeed, it was not until the middle of the 19th century that a small number of French critics, including the Goncourt brothers, drew attention to his masterly technique. Today, his paintings are highly prized, and on display in academies and collections throughout the world.

xxxxxIncidentally, we are told that on one occasion a fellow artist was pontificating about the methods he used to prepare his colours for painting. Chardin listened impatiently and then tersely replied that an artist did not paint with colour; he used colour, but he painted with feeling! You might feel that that sums up the man as well as his talent.