xxxxxThe name of the Spanish novelist and poet Miguel de Cervantes will be for ever linked with his masterpiece Don Quixote de la Mancha, published in 1615. An amusing fanciful satire on the chivalric deeds of the Middle Ages, it has become one of the most widely translated works of all time. It had an enormous impact on the development of prose fiction, influencing, amongst others, the 19th century writers Scott, Dickens, Flaubert and Dostoyevsky. Cervantes led an exciting life. He fought and was wounded at the Battle of Lepanto, was captured by Barbary pirates, and later worked in Seville, providing supplies for the Spanish Armada. He also spent some time in prison, and it was during these stays that he began writing about the misadventures of the old knight Don Quixote and his faithful man servant Sancho Panza - exposing with humour life’s conflict between reality and the stuff of day dreams. Apart from this work he wrote a number of novels, plays, poems and short stories. 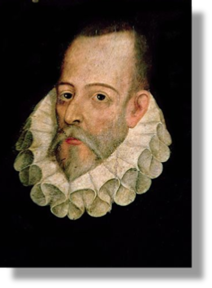 xxxxxThe famous Spanish novelist and poet Miguel de Cervantes is famed above all for his masterpiece Don Quixote de la Mancha, the first part of which was published in 1605, and the completed version in 1615. This delightful and fanciful adventure, a brilliant and amusing satire on the chivalric deeds of the Middle Ages as well as the sentimental romances of the day, was an immediate success. It was very soon published in French and English and, over the years, it has become one of the most widely translated works of all time. It is regarded today as the first great novel of the Western World, where it has had an enormous influence on the development of prose fiction. Among those influenced by this work were the nineteenth century writers Scott, Dickens, Flaubert and Dostoyevsky.

xxxxxLike his colourful character Don Quixote, Cervantes led a varied and exciting life. He was born near Madrid, son of a barber-surgeon, and travelled to Rome in his early twenties. In 1570 he joined a Spanish regiment in Naples, then a Spanish possession, and the following year was wounded at the Sea Battle of Lepanto, fought between the Holy Alliance and the Ottoman Turks. Serving as an infantry soldier on board the Marquesa, he proved something of a hero. By all accounts he refused to go below, despite suffering from a fever, and instead joined in the thick of the fighting. As a result, he received gunshot wounds to his chest, and his left hand was so badly damaged that he could not use it for the rest of his life. (The loss of this left hand, he was later to point out, was for "the greater glory of the right"!)

xxxxxWorse was to come. On his journey back to Spain in 1575 he was captured by Barbary pirates and taken as a slave to Algiers. He made a number of brave but unsuccessful attempts to escape, and it was not until 1580 that family and friends managed to raise his ransom money and he was able to return to Spain. Despite his good war record, he could find no employment within a noble family or the state service, and it was then that he turned his hand to writing. He produced a number of poems and plays, and had some success with his pastoral novel La Galatea, published in 1585, but he could not earn enough to make a living. He eventually found work with the government and, at the age of forty we find him in Seville, providing supplies for the Spanish Armada, then preparing to sail against England. When this job came to an end he worked as a tax collector, and ended up in prison on a number of occasions because of irregularities in his accounts. 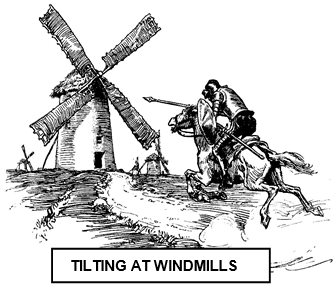 xxxxxIt was during these intermittent stays in prison that he hit upon the idea of weaving stories around a deluded old man who imagines himself to be a knight of old, travelling around doing good deeds and challenging evil. The outcome, of course, was the misadventures of Don Quixote, made the more captivating by the creation of Rosinante, his broken-down horse, and Sancho Panza his ever-faithful but ever-realistic man servant. The fanciful episodes which unfold are satirical and amusing - as they were clearly meant to be - but there is also a serious lesson to be learnt. Caught between the world of his fantasies and the world of stark reality (as portrayed by his squire), the loveable Don Quixote epitomises the conflict between that which was possible and that which was not, between the real and the ideal, between the attainable and the elusive stuff of day dreams. In addition, this rich array of situations and characters creates a revealing kaleidoscope of Spanish society during the sixteenth century.

xxxxxDon Quixote proved incredibly popular, but it brought Cervantes scant recognition in his own life time. Nor did he gain a great deal financially. Indeed, his poor knowledge of money matters and the production at the time of a large number of unauthorised versions of his masterpiece meant that for much of his life he remained poverty-stricken, for ever attempting to get himself out of debt. He died in 1616, and was buried in the convent of the Discalced Trinitarians in the Calle de Cantarranas on the very day of Shakespeare's death. The exact place of his burial is not known. 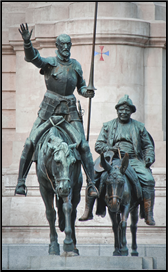 xxxxxNeedless to say, the Man from the Mancha (Mancha is an area in central Spain) has been the inspiration for a vast variety of works. To mention but a few, there have been operas by the Frenchman Jules Massenet and the Spaniard Manuel de Falla, a tone poem by the German composer Richard Strauss, and a ballet by the Russian born choreographer George Balanchine, not to mention an American musical, at least two films, and a number of cartoons and television programmes.

xxxxxOther works by him include his Exemplary Novels of 1613, twelve short stories which include his highly satirical The Talking Dogs, a collection of plays, his long poem The Trip to Parnassus (in which the prologue contains his farewell to life), and his long heroic romance, The Trials and Peregrinations of Persiles and Sigismunda, not published until after his death.

xxxxxLope de Vega (1562-1635) was another gifted writer of the Golden Age of Spanish literature. Known to Cervantes, he produced at least 800 plays in verse, based on themes of love, honour and individual liberty. He also wrote about 400 religious plays extolling the virtues of the Catholic faith. Among his notable works are The Dance Teacher, The Dog in the Manger and The Steel of Madrid of 1613 (the source of Molière’s The Doctor In Spite of Himself). Some of his plays, like The Foolish Lady and The Knight of Olmedo, are still performed today. Other works included short stories, prose romances, and a verse epic on the life of Mary Queen of Scots.

xxxxxAnd another gifted writer of the Golden Age of Spanish literature was the playwright and poet Lope de Vega (1562-1635). Cervantes knew him and understandably envied the reputation he achieved. It is said that he produced at least 800 plays in verse, the majority based on the theme of love, or woven around a question of personal honour or individual liberty. The solution to the plot invariably came in the closing scenes of the "comedia" - a social drama which was a blend of comedy and tragedy. Many were based on fictional sources or old historical romances - including the heroic tale of El Cid -, but he also wrote about 400 religious plays, all extolling the virtues of the Catholic faith. It is hardly surprising that he has come to be regarded as the founder of his country's national drama, a reputation enhanced by his treatise of 1609 on The New Art of Writing Plays in This Time. 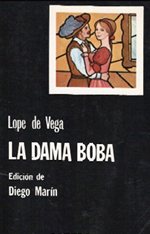 xxxxxNotable works amongst his vast output are The Dance Teacher, St. John's Eve, The Dog in the Manger (one of his many cloak-and-dagger comedies) and The Steel of Madrid, written in about 1613 and clearly the source of The Doctor in Spite of Himself, a major work by the French dramatist Molière. Some of his plays are still performed, such as The Foolish Lady (La Dama Boba) of 1613, and the later work, The Knight of Olmedo (El caballero de Olmedo). His writing was encouraged by the king, Philip IV, and apart from his plays, he wrote a vast amount of fine narrative and lyric poems - many in eloquent praise of his lady loves - as well as short stories and prose romances. Notable among these written works was a verse epic on the life of Mary Queen of Scots, La Corona Tragica, and his Dorothy, a work in dialogue form which closely mirrors his own life. 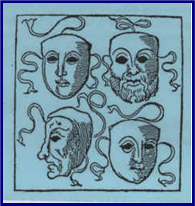 xxxxxAnd that life was quite an eventful one. Some of his plots are more than likely based on his own romantic escapades. He was born in Madrid in 1562, the son of an embroiderer. He studied for the priesthood at the University of Alcala de Henares, but left soon afterwards in pursuit of a married woman. In 1588, having been banished from his city on account of another love affair, he served in the Spanish Armada and, on his return started writing in earnest. In 1610 he moved to Madrid where, in the space of two years, both his favourite son and his second wife died. Following this double tragedy, he turned to the Church and became a priest in 1614, but this in no way slowed down his literary career nor, for that matter, his way of life. His plays, many including music and dance, continued to be highly popular with all classes, and brought him fame and a large fortune. But in the last years of his life he suffered more personal tragedy with the loss of another son, drowned at sea, and the mental illness of his last lover. In 1635 he died in his house in Madrid, a sad and lonely man.