xxxxxThe "Celsius" thermometer scale was put forward by the Swedish astronomer and physicist Anders Celsius in 1742. Ranging from freezing to boiling point over a scale of 100 degrees, it was rapidly adopted in scientific research. He was professor of astronomy at Uppsala University from 1730 until his death, and in this capacity was responsible for building Sweden's first observatory, completed at Uppsala in 1740. In 1733 he published 316 observations of the northern lights, carried out over sixteen years, and three years later he led an expedition to Lapland to measure the length of a degree along a meridian in the polar region, thereby confirming Newton's theory that the earth is slightly flattened at the poles. A major treatise in 1730 proposed a new method to determine the distance of the sun from the earth. 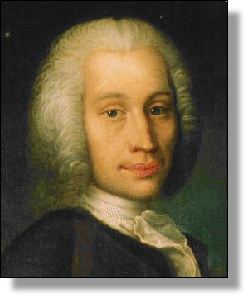 xxxxxIt was in 1742 that the Swedish astronomer and physicist Anders Celsius put forward his own “centigrade” thermometer scale, proposed primarily for use in scientific research. In a paper read before the Swedish Academy of Sciences, he advocated a temperature scale of 100 degrees, ranging from freezing to boiling point. Originally, he suggested that freezing point should be 100 degrees and boiling point 0 degrees, but the scale was reversed eight years later by his pupil Martin Stromer. In 1948, in order to avoid confusion with the angular measurement known as the "centigrade" (one hundredth of a grade), the scale was officially named "Celsius" by the World Conference on Weights and Measures. However, the earlier term is still widely used. 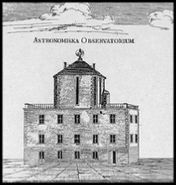 xxxxxCelsius was born in Uppsala, and in 1730 succeeded his father as professor of astronomy at the city's university. In the course of his work, he travelled throughout Europe, and he was responsible for building Sweden's first observatory, completed at Uppsala in 1740 (illustrated). He was the leading member of a team which, over sixteen years, made 316 observations of the northern lights (aurora borealis), and he published these results in 1733. Three years later he led an expedition to Lapland to measure the arc of the meridian, and, in so doing, verified the theory put forward by Isaac Newton that the earth is slightly flattened at the poles. His major works included A Dissertation on a New Method of Determining the Distance of the Sun from the Earth, written in 1730, and Disquisition on Observations Made in France for Determining the Shape of the Earth, published eight years later.

xxxxxIncidentally, a very approximate way of converting Celsius to the Fahrenheit scale (still employed by some) is to double the temperature and then add 30 degrees. So a temperature of, say, 12 degrees Celsius becomes 54 degrees Fahrenheit. ......