xxxxxThis was a plot hatched in 1820 by the militant radical Arthur Thistlewood. He aimed to kill a number of Cabinet members as they dined at the London home of the Earl of Harrowby. Planned to revenge the “murder of innocents” at the Peterloo Massacre of 1819 (G3c), and to bring about a country-wide revolution on behalf of the people, it became known to the police, and they attacked and overpowered the conspirators at a house in Cato Street. Thistlewood and four others were hanged, and five were transported for life. Though failing in its aim, the event showed the undercurrent of political unrest in Britain at this time. 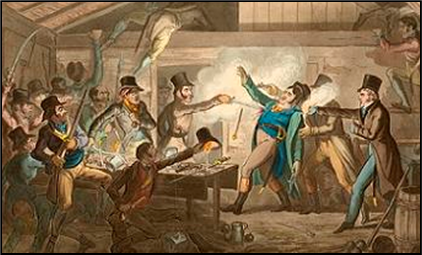 xxxxxThe Cato Street Conspiracy, so called because it was hatched in Cato Street, London, was the brainchild of the militant radical Arthur Thistlewood. Having learnt that members of the Cabinet were dining with the Earl of Harrowby at his home in Grosvenor Square on the 23rd February 1820, he led a plot to kill them in revenge for what he called the “murder of innocents” at the Peterloo Massacre of 1819 (G3c). Furthermore, he was convinced that, if the plan were successful, a violent, country-wide revolution would follow, and a new government could be formed by the people and for the people.

xxxxxHowever, details of this ambitious plot leaked out. The conspiracy was infiltrated by a number of police officers, and on the evening of the planned attack in 1820, the police raided a house in Cato Street where some twenty-five armed conspirators were making their last-minute preparations. In the fighting that followed one police officer was stabbed to death, and a number of the police and the conspirators were wounded before the gang was eventually overpowered. Thistlewood managed to escape, but he was captured the following day and, along with four others, was found guilty of high treason and hanged. At the end of his trial he remained defiant. “Albion (England),” he declared, “is still in the chains of slavery. I quit it without regret”. Five other members of the conspiracy were sentenced to transportation for life. 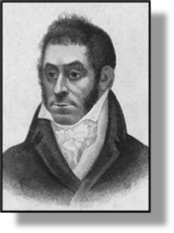 xxxxxThe Englishman Arthur Thistlewood (1774-1820) (illustrated) was the son of a successful farmer in Lincolnshire. Having visited the United States and then France during the turbulent years of the French Revolution, he returned to England in 1794, determined to overthrow the government and set up a revolutionary administration in the hands of the people. He saw his opportunity in December 1816 when, as a member of the Spencian Philanthropists, an extremely radical group, he assisted in the planning of an uprising at Islington to seize the Bank of England and the Tower of London. This plot - the so-called Spa Fields Riot - ended in failure. Regarded as a dangerous character by the authorities, he was arrested and charged with treason, but he was eventually acquitted, and imprisoned for twelve months on the minor charge of challenging Viscount Sidmouth to a duel, the minister who, as home secretary, had been responsible for introducing repressive measures against radical movements.

xxxxxIt was on being released from prison that Thistlewood came up with the Cato Street Conspiracy, an event which, though poorly managed and promptly foiled, showed the extent of economic distress, and the undercurrent of political unrest in Britain at this time.

xxxxxIncidentally, the picture above was by the London illustrator George Cruikshank, produced in March 1820. The caption reads: “The scene at the moment when Smithers the Police officer was stabbed, faithfully represented from the Description of Mr. Ruthven (one of the police spies).” ……

xxxxx…… The Spencian Philanthropists were named after Thomas Spence (1750-1814), a schoolteacher from Newcastle who earned a reputation as an ardent revolutionary. He came to London in 1792, and over the next twenty years wrote a number of books and pamphlets calling for a radical transformation of British society. Amongst his proposals was the nationalisation of land. He died in 1814, but a number of his followers formed a movement to keep alive his ideas of an equal society.