xxxxxThe artist Antonio Canaletto gained fame and, for a time, fortune by producing his highly detailed and colourful views of his birthplace Venice. Noted for their brilliant perspective, figure painting and soft, warm glow, they proved particularly popular with English aristocrats on the Grand Tour who were looking for mementoes of their visit. Two works demonstrating his skill are The Doge Visiting San Roco, painted around 1735, and The Upper Reaches of the Grand Canal of 1738, both in the National Gallery in London. To meet and stimulate demand in England, Canaletto was assisted by a number of local patrons. Chief amongst these was Joseph Smith, a wealthy merchant, who drummed up commissions and helped to despatch dozens of works to London. When the War of the Austrian Succession severely reduced the number of aristocrats on the Grand Tour, Canaletto went to live in England in 1746 and stayed for ten years. Here he produced a large number landscapes, his best work being scenes of London and the River Thames. On his return, demand for his view paintings seriously declined, and the man who had immortalised the beauty of Venice died in relative poverty and obscurity. The suffused lighting he created influenced 19th century landscape painting, and among British artists who studied his paintings or drawings were William Hogarth, Richard Wilson, Thomas Girtin and J.M.W. Turner. 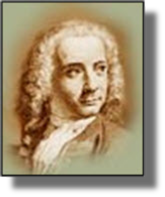 xxxxxThe Italian artist Antonio Canaletto (born Canal) is well known for his highly detailed and sparkling views of his native city Venice. The almost photographic-like quality he achieved can be seen in such works as The Doge Visiting San Roco, painted around 1735, and The Upper Reaches of the Grand Canal, of 1738 , both in the National Gallery, London. These spectacular vistas, besides singling him out as one of the greatest exponents of the new cityscape genre, made Venice a recognised centre of painting, and one of Europe's greatest tourist attractions.

xxxxxCanaletto was born in Venice, and his home was not far from the Rialto Bridge. In his early years, he worked for his father, a scene painter and designer, and this would doubtless account for his extraordinary mastery of perspective. They worked together on scenery for Vivaldi's operas, and also travelled to Rome in 1719 to design sets for operas by Alessandro Scarlatti. While there he made some sketches of the ancient ruins and, on his return to Venice, began painting scenes of the city, influenced early on by the "view painter" of the day, Luca Carlevaris. Within a short time he had gained a reputation for the quality of his work, and was catering for a growing number of clients, the majority of them English. 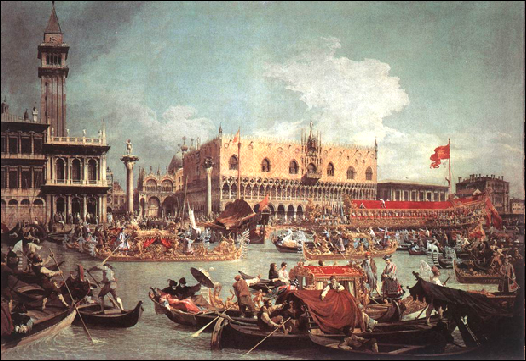 xxxxxHis early work, such as View of Venice (sometimes known as the Stonemason's Yard) depicted daily life in the back streets, but to meet commercial demand, he was soon concentrating on the popular tourist attractions, like the Grand Canal and St. Mark's Square. Although his eye for precise, jewel-like detail tended to imitate rather than artistically interpret these scenes - especially as more and more "copies" were required - he nonetheless created a wonderful feeling of depth and space, enhanced by a warm, suffused light and an abundance of glowing colours - so typical of the Venetian school. Early on, these busy views were seen under heavy, leaden skies, but, as his brushwork became freer, his scenes were often bathed in sunlight, giving his colours a richer tone. And quite apart from his brilliant portrayal of buildings and water, he was also a competent draughtsman and possessed great skill as a figure artist. A work in which all these qualities come together is his Return of the Bucintoro (State Barge) on Ascension Day, painted about 1730 (illustrated). This shows the elaborate, colourful ceremony held to celebrate the marriage of Venice to the Adriatic Sea - its vital lifeline for trade.

xxxxxIn 1746 Canaletto went to England in search of customers, the War of the Austrian Succession having drastically reduced the number of British visitors to Venice. He stayed, off and on, for ten years, mostly in and around London. During this time he produced a number of English landscapes, but it is in his views of London and the River Thames that his work is seen at its best. Illustrated here is a view of St. Paul’s Cathedral. His long stay in England made him a popular artist in Britain, at least in his early years, and there are a number of his major works in the National Gallery, London. In addition, before the war virtually put a stop to travelling on the continent, English aristocrats on the Grand Tour were anxious to buy scenes of Venice as mementoes of their visit, particularly those depicting the Grand Canal, St Mark's Square or some colourful local festival. 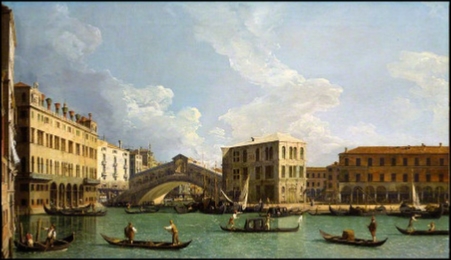 xxxxxHowever, most of his work came through local patrons. In this respect, the British consul in Venice, the merchant Joseph Smith (c1682-1770), was by far the best. He acted as his agent, packing and shipping his works to England, and drumming up custom. The 50 paintings and 150 drawings he himself commissioned are now in the Royal Collection at Windsor. By all accounts, Smith was a pompous, snob of a man, but Canaletto found him to be a generous patron. Indeed it was through his good offices that he sold 22 paintings to the Duke of Bedford and 21 to the Duke of Buckingham. It is hardly surprising that, as a “mark of esteem and homage" Canaletto should dedicate to Smith his collection of finely detailed etchings of Venice and the lagoons. (The painting here shows the Rialto Bridge.)

xxxxxNot very long after leaving England and returning to Venice, Canaletto found work hard to come by, despite recourse to advertising. The popularity of his work began to decline, mainly because there was much repetition of subject matter, and because his paintings tended to lack the sensitivity and the freedom of brushwork shown in his earlier works. In the end, the man who had immortalised the beauty of Venice on canvass died in virtual poverty and obscurity. Nonetheless, his reputation was secured, and the suffused lighting and atmosphere he achieved in his major works had an important influence upon landscape painting in the 19th century. Among British artists who gained from a study of his paintings or drawings were William Hogarth, Richard Wilson, Thomas Girtin and J.M.W. Turner.

xxxxxThe 18th century English phenomenon the Grand Tour was intended to give the young aristocrat an opportunity of travelling for two years or more on the continent, learning a language or two and studying culture in all its forms, be it Renaissance art in Florence, classical antiquity in Rome, or the decorative beauty of Venice. For many it was time well spent, but for as large a number if not more it was a period of enlightenment in the pleasure cities of Europe, none being short of gambling halls, drinking houses and brothels. And Grand Tourists of whatever inclination were often if not generally fleeced, being overcharged for accommodation and carriages, and palmed off with fake antiques or mediocre paintings. Nonetheless it is estimated that by 1769 some 40,000 Englishmen were "running up and down Italy". The Grand Tour was also used by artists and art collectors to show off their wares, but it came to an end with the coming of the Napoleonic Wars, and it never returned in like form. xxxxxFor the most part, the Grand Tour was an 18th century English phenomenon. It provided, as it were, a "finishing school" for the young aristocrat, some as young as sixteen. Together with their tutor, they would journey about the continent for a couple of years - mainly in France and Italy - with the avowed aim of learning a language or two and imbibing continental culture. In reality, for many it offered a welcome period of enlightenment in the pleasure cities of Europe - Paris and Venice being especially well known for their gambling halls, drinking houses and brothels. The continental landlord, carriage proprietor and art connoisseur saw them coming, and they paid the price in exaggerated bills and tips, faked antiques and over-valued paintings. Some of the "tourists" employed agents (known as voiturin or vetturino) to hire carriages and arrange accommodation, but they did not come cheap. In short, it was a costly business and coined the phrase "an innocent abroad". Even so, it is estimated that by 1769 about 40,000 Englishmen were "running up and down Italy", bearing witness to the words of the English writer Samuel Johnson that "a man who has not been to Italy is always conscious of an inferiority".

xxxxxFor those who were genuinely interested in seeing works of classical antiquity and Renaissance art - and there were many - there was much to see and learn. Florence, for example, offered the wonders of its splendid art galleries, Rome the architecture and statuary of ancient times, and Venice the works of the great masters of colour and decoration. Some went as far south as Naples and visited Pompeii, where excavation of the Roman remains was already under way and statues and relics were there for the picking (illustrated). Others, the more adventurous and energetic, even took in an "optional extra" - a mountain climb in the Alps!

xxxxxAnd the Grand Tour was also used by the artist and art connoisseur to meet his continental counterpart. Such meetings provided a valuable cross-fertilisation of ideas, and an ample opportunity for all parties to obtain commissions on the other side of the Channel. But the days of this unique aristocratic institution, whether it was for pleasure, enlightenment or gain, were numbered. At the end of the 18th century the outbreak of the Napoleonic Wars put an end to such tourism and it was never to return in like form.

and The "Grand Tour" 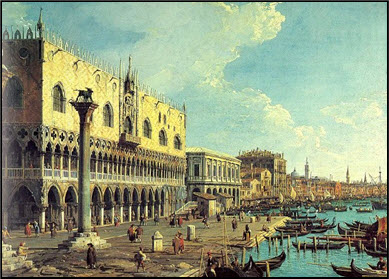 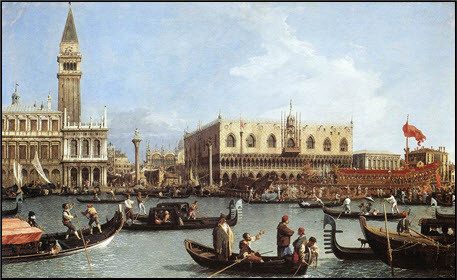 xxxxxIncidentally, it would seem that Canaletto had few if any pupils working for him. However, it is likely that his young nephew Bernado Bellotto (1720-80) assisted him at one time. He continued his uncle's tradition of view paintings, but left Venice in 1742 and, for the most part, worked in Munich, Dresden and Warsaw. We are told that his detailed views of Dresden and the Polish capital were used after the Second World War when the historic sections of these cities were being restored. xxxxxThe artist who followed most closely in Canaletto's footsteps - though not until the 1750s - was the Venetian rococo artist Francesco Guardi (1712-93). Francesco, together with his brother Nicolo, was trained by his elder brother Giovanni. He started his career as a rococo figure painter - in the way of his more talented brother-in-law Giovanni Tiepolo - and produced a large number of paintings on request, be they for private homes, palaces or churches. Having turned to veduta (view paintings) in about 1750 - doubtless seeing it as a profitable line - he recorded numerous events in the social and political life of Venice, such as the election of the doge and the visits of foreign dignitaries. A prolific artist who was elected to the Venetian Academy in 1784, his work was particularly admired by foreigners, especially the English.

xxxxxFor his view paintings, as one would expect, Guardi took as his guide Canaletto's earlier works, noted for their loose brushwork. Commercially speaking, they were in no way as successful as Canaletto's scenes, but they were artistic interpretations rather than precise, detailed copies, where romanticism took the place of realism. A good example of his work is the Piazza San Marco Decorated for the Feast of the Ascension (1775). Furthermore, as well as painting the "postcard" pictures of Venice, he took to depicting ruins in order to evoke imaginative capriccios (flights of fancy), his freer, lighter handling serving well to heighten the feeling of enchantment (illustrated above). In some cases, his shimmering light, together with his casual brushstrokes, bright spots of colour and broken lines, anticipated 19th century impressionism. It might be said that, whilst Canaletto faithfully recorded the architecture of Venice - given the occasional artistic licence - Guardi captured to a greater extent the romantic spirit and special atmosphere of this lovely city.