THE TREATY OF CAMPO FORMIO  OCTOBER 1797

xxxxxIn 1796 the new Directory, grateful for his part in crushing the royalist uprising of October 1795, appointed General Bonaparte commander of a small, poorly equipped army to attack Sardinian and Austrian possessions in northern Italy. This campaign was seen as purely a diversionary tactic, while two powerful armies marched directly on Vienna. Despite the condition of his force, he inspired his men and led them on to a series of brilliant victories, first defeating the Sardinians at Mondovi, and then the Austrians in a string of battles, including those of Lodi, Arcole and Rivoli. He then set out to capture Vienna - the two other French armies having been repulsed - but Austria quickly sued for peace. Napoleon then turned diplomat, making favourable treaties with the small principalities (including the papal states) and, by the Treaty of Campo Formio (1797), forcing the Austrians to accept French control of the Po Valley, and, further north, their possession of Belgium and their land up to the Rhine. In late 1797 Napoleon returned home to a hero’s welcome and then, as we shall see, invaded Egypt in 1798 to strike at Britain, the only remaining enemy. In the meanwhile, however, the Directory faced serious and growing unrest at home. It was becoming clear that France required powerful leadership if it were to be saved from economic and political disaster. 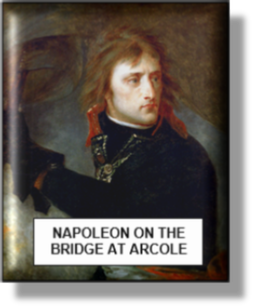 xxxxxAs we have seen, General Bonaparte’s “whiff of grapeshot” in October 1795, when thousands of royalist insurgents marched on the National Convention, saved the Republic in its hour of need. The new constitution came into effect the following month, and a grateful Directory appointed Bonaparte the “General of the Interior”. But revolutionary France still faced exterior threats and these had also to be dealt with. The Treaties of Basle, conducted in the first half of 1795, had knocked the stuffing out of the First Alliance, but Great Britain, Austria and Sardinia still remained at war with the republic. The Directory decided to seek further success on the battlefield in order to bring the conflict to an end and, incidentally and hopefully, to divert public attention from the serious inflation and growing unrest at home.

xxxxxLeaving island Britain aside for the moment, the plan of action devised by the military strategist Lazare Carnot involved a direct attack upon Germany by two well-equipped armies with the aim of forcing the enemy back to Vienna. At the same time, a smaller, second-rate force - simply acting as a diversion - would attack the Austrian possessions in Italy and the kingdom of Sardinia-Piedmont. The proven generals Jourdan and Morau were chosen to lead the frontal attack on Germany, whilst the young General Napoleon Bonaparte was given command of the Italian campaign. In some respects it was hardly a prestigious appointment. His miserable little army, a mere 30,000 strong, was ill-paid, had little artillery, and both men and horses were weak with hunger. Only a leader of outstanding ability and charisma could inspire and motivate such a force. The 27-year-old Bonaparte proved to be such a leader. Brimming with confidence and enthusiasm, he promised to lead his men to the fertile plains of northern Italy where they would find “honour, glory and riches”. Almost to a man they followed him with renewed spirit. 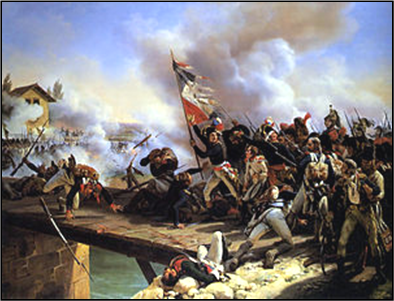 xxxxxFiguringxthat the Sardinians and Austrians would not expect an invasion over the winter months, he crossed the Alps north of Nice and entered Italy early in April 1796. The French army, he told the Italians, had come to break their chains. It had no quarrel save with “the tyrants who enslave you”. Then, true to his word, he swiftly drove a wedge between his two enemies and, turning on the Sardinians, defeated them at the Battle of Mondovi. He then bluffed them into making peace at Cherasco later that month by threatening to bring up a larger army if they refused to come to terms! As a result, Nice and Savoy, occupied by the revolutionary army in 1792, were annexed to France. Hexthen moved eastwards to take on the more formidable Austrians, and in this campaign he again showed his exceptional skill as a field commander, anticipating the time and place of battle, and manoeuvring his troops at speed to take advantage of his enemy’s weakest point. After his first successful encounter at Lodi, he occupied Milan and then defeated the Austrians in a series of encounters which included the Battle of Arcole (illustrated) in November 1796, and the Battle of Rivoli early in the New Year.

xxxxxThese victories enabled him to capture the stronghold of Mantua in February 1797, and then, having crossed the River Tagliamento, march north-east towards Vienna. The Austrians, fearing that this young but highly capable French commander could succeed where others had failed - the earlier attack on Germany by Jourdan and Morau having been repulsed - quickly admitted defeat and sued for peace. The French government agreed, and Napoleon, just 54 miles from the Habsburg capital, was obliged to turn back his army. In April a preliminary peace settlement was agreed at Leoben. Meanwhile, alarmed at the speed and success of the French campaign, the Papal States and principalities throughout the region were anxious to buy peace, giving up land, handing over money and art 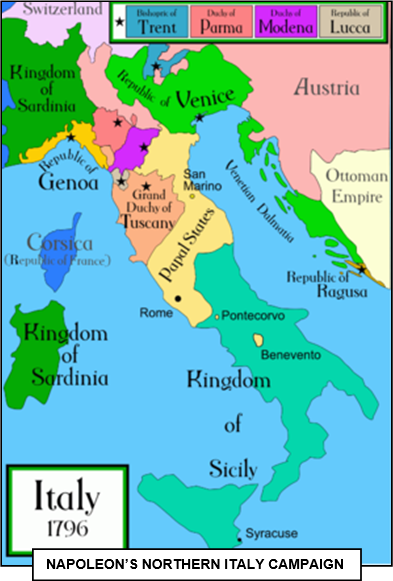 treasures, and accepting French control across the entire Po valley.

xxxxxDenied his opportunity to capture Vienna, Bonaparte chose to become the diplomat, much to the alarm of the Directory. Without reference to Paris, he redrew the map of northern Italy, creating the Cisalpine Republic and the Ligurian Republic (later incorporated into France), and drafting in person treaties with the Pope and the rulers of Parma, Modena, Genoa and Naples. Then in October 1797, having brought Austria to the peace table by his own endeavours, he himself negotiated the Treaty of Campo Formio, (a town near Udine in north-east Italy). The Austrians were obliged to give up Lombardy and recognise French control of northern Italy. France also gained Venice’s Ionian Islands in the Adriatic Sea. By way of compensation, Bonaparte granted Austria possession of the ancient republic of Venice, putting an end to this city’s eleven hundred years of independence. And further west, too, the Austrian Netherlands (Belgium) and, later, the territory on the left bank of the Rhine were confirmed as French possessions.

xxxxxIn December 1797 Bonaparte came home to a hero’s welcome. The frontal attack upon Vienna via Germany had failed miserably. It was largely thanks to his endeavours that the Directory had now achieved the war aims sought for so long by the Bourbon monarchy it had replaced. France now stretched to the Rhine and the Alps, the natural boundaries which Louis XIV, with all his costly wars, had failed to achieve. Furthermore, the French were virtual masters of Italy, had annexed Belgium (the Austrian Netherlands) and made Holland a satellite state. And these gains had been internationally recognised. Of the First Coalition, formed against the new Republic in February 1793, only Great Britain was still at war, and this conflict was almost entirely confined to a battle at sea. 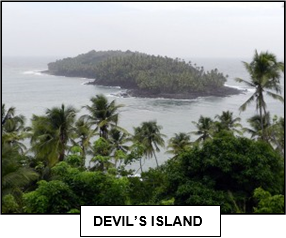 xxxxxBut the France Bonaparte returned to was not in a good state of repair. Over the past two years the Directory had been stumbling from one crisis to another, beset by soaring inflation, growing opposition to the new national church, and constant threats arising from conservative and radical revivals. In September 1797, for example, the Directors had been forced to carry out a drastic purge of parliament, transporting deputies with royalist sympathies to the penal colony of Devil’s Island off the coast of French Guiana - a fate referred to as “the dry guillotine”. It was becoming clear that a firmer hand was needed at the nation’s helm.

xxxxxFor his part, Bonaparte was now anxious to take on the British, and, as we shall see he did so in 1798, attacking Egypt to block their land route to India. However, by his highly successful campaign in Italy, both as a man of war and a maker of peace, he was seen by many as a ruler waiting in the wings. Nor did Napoleon himself conceal his ambitions in that direction. As he himself had said while fighting in Italy, “Do you think that it is to aggrandize the lawyers and the Directory that I triumph out here?” It was a loaded question, and one that would be answered within the space of two years.

xxxxxIncidentally, by the end of Napoleon’s Italian campaign virtually the whole of the peninsula had come under French control. Then in 1798, Rome itself was occupied, and a Roman Republic proclaimed. In many parts, the Italian people welcomed Napoleon as a liberator, but despite his earlier promises, his rule was harsh in a number of ways. He imposed on them a heavy burden in taxation and military support, plundered their museums and art galleries, and acted without mercy against the slightest opposition to his authority. But his overthrow of Austrian rule had illustrated what could be achieved, and this had awakened the first stirrings of nationalism. This national awakening, the origins of what came to be known as the Italian Risorgimento, was to have a profound effect upon the history of Italy during the next century.

xxxxxAfter the fall of Napoleon, his friend and former master David was forced into exile. Gros took charge of his studio and was made a baron. He produced some fine portraits during this late period, but his mythological scenes, in which he attempted to continue the studio’s classical ideals, proved unpopular with both the critics and the public. Distressed by his own failure and, above all, by David’s criticism of his efforts, he took his own life by drowning himself in the River Seine. As a romantic painter, the richness, free brushwork, and dramatic power of his painting greatly influenced his fellow artists and countrymen Théodore Gericault (1818 G3c) and Eugène Delacroix (1824 G4).

xxxxxThe French painter Antoine-Jean Gros (1771-1835) studied under the neo-classical artist Jacques-Louis David, but he was a romantic at heart and was greatly influenced by the richly-coloured, vibrant works of Peter Paul Rubens. As the official war artist, he accompanied Napoleon on his campaigns and produced vast epic paintings to record the battles he fought. These included Napoleon on the Bridge at Arcole, The Battle of Aboukir, and Napoleon at Eylau. After the fall of Napoleon, David was forced into exile, and Gros took over his studio. He gained some success as a portraitist, but his attempts to continue the studio’s classical ideals met with little success. His mythological scenes were not well received, and among his critics was David, an artist he much admired. Distressed by his failure, he took his own life. As a romantic painter, however, his work greatly influenced the French artists Géricaut (1818 G3c) and Delacroix (1824 G4). 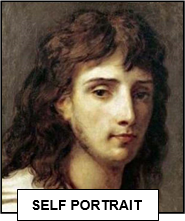 xxxxxThe painting above, Napoleon on the Bridge at Arcole, was the first major work of the Parisian Romantic painter Baron Antoine-Jean Gros. (1771-1835). As the official war artist, he accompanied Napoleon on his campaigns, and was at the Battle of Arcole in 1796 when, at a crucial moment, Napoleon led his troops over the bridge and turned the fight in their favour. Apart from making a series of vast epic paintings tracing the military career of Napoleon, - such as The Battle of Aboukir (1806) and Napoleon at Eylau (1808) - he was a member of the commission which selected Italian works of art for transfer to the Louvre in Paris.

xxxxxGros was trained by his father, a painter of miniatures, and in 1785 joined the studio of his father’s friend Jacques-Louis David. Here, as a devoted pupil, he much admired David’s neo-classical style, but he was a romantic at heart, and was influenced to a greater extent by the more vibrant work of Peter Paul Rubens. Nonetheless, it was David that brought him to the notice of Napoleon in 1793, and started him off on his career as a history painter.