xxxxxAs we have seen, the revocation of the Edict of Nantes in 1685 (J2) put an end to any hope of religious toleration in France. Hundreds of thousands of Huguenots fled the country. The majority went to neighbouring Protestant states, like England and Germany, but some took refuge in the remote, mountainous regions of southern France. Known as the Camisards, they maintained their faith, but in July 1702, fierce fighting broke out between them and the local Catholics. The government was forced to rush in troops - 60,000 at one time - and a policy of extermination was adopted. Over 450 villages were destroyed and their inhabitants slaughtered. The rebellion was finally crushed in 1705, but sporadic outbreaks occurred for another five years. 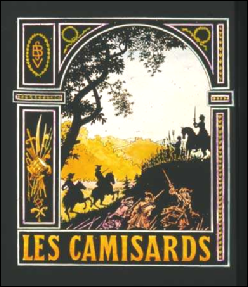 xxxxxAs we have seen, the revocation of the Edict of Nantes by Louis XIV of France in 1685 (J2), finally brought an end to the last vestiges of religious and political toleration which had been granted to the French Protestants by Henry IV in 1598. These concessions had never been liked or fully accepted by the Roman Catholics, of course, and, over the years, they had been slowly but surely whittled down or openly ignored. For the vast majority of Protestants, the revocation of the edict was the last straw. Now denied any hope of the smallest measure of compromise or conciliation, and facing persecution as a result, hundreds of thousands fled to the neighbouring Protestant states of England, Germany and the Netherlands. Others made a new life in the English colonies of North America or settled in the Cape of Good Hope. 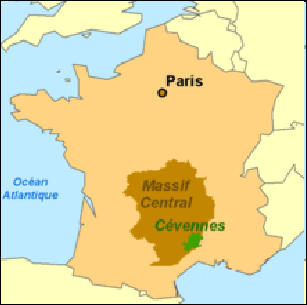 xxxxxOf those who remained in France, many took refuge in the mountainous Bas-Languedoc and Cévennes regions of southern France. In these remote and strongly protestant areas they were able to follow their own faith and, with the assistance of the local people, keep government forces at bay by the use of guerrilla tactics. During night fighting they wore black shirts or smocks, and thus became known as Camisards from camisa, the word for a shirt or a peasant’s smock in the local dialect.

xxxxxAt Le Pont-de-Montvert in July 1702, the rebellion took on a new dimension following the murder of the Abbé du Chayla, a notoriously harsh Catholic persecutor. Amid a wave of religious fervour, the fight was now taken to the local Catholics. Churches were sacked and burnt down, and priests were driven out or killed. Ledxby two local men, a baker’s apprentice called Jean Cavalier and a sheep farmer named Roland Laporte, the movement became a formidable force, using the mountainous terrain to carry out ambushes, night attacks, and hit and run tactics. In 1703 the rebels won a notable victory at Vagnas and followed this up a year later by defeating some of the king’s finest troops at Martignargues. Indeed, at one time, at the height of the War of the Spanish Succession, it is estimated that the government was obliged to assign some 60,000 troops to the region to prevent the revolt from getting out of hand.

xxxxxAdopting the usual response to such guerrilla tactics, the government, urged on by Pope Clement XI, resorted to a policy of extermination. More than 450 villages were destroyed and their inhabitants slaughtered. In 1704, following a government victory at Nages, an amnesty was offered, but as it did not include religious liberty, the conflict continued. The rebellion was finally crushed the following year after a number of the leading Camisards had been captured, Laporte had been killed, and Cavalier (illustrated), the movement’s ablest tactician, had fled to Switzerland. Opposition continued, but it was of a sporadic nature, and had become a spent force by 1710.

xxxxxIncidentally, Jean Cavalier went on to fight for the British against his own country in both Portugal and Spain during 1707. He was later made a Brigadier, and in 1738 was appointed Lieutenant Governor of Jersey, attaining the rank of Major General. At one time he settled in a Huguenot colony in Dublin and it was here, in 1726, that he published his Memoires of the Wars of the Cévennes.