xxxxxAs we have seen, to rectify the calendar instituted by Julius Caesar in 46 BC, Pope Gregory XIII introduced his own one in 1582 (L1). Catholic Europe adopted it almost at once, but Protestant countries were slow to change, and Greece and Turkey did not do so until the 1920s. Britain adopted the Gregorian Calendar in 1752, amid public protest over the loss of eleven days. The new arrangement was beneficial for trade, but at the time it did cause some confusion over the payment of wages and rents! There is still confusion today in that the Jewish calendar starts in 3761 BC (once adjudged the beginning of the world) and the Muslim one in 622 AD, when Muhammad began his mission. 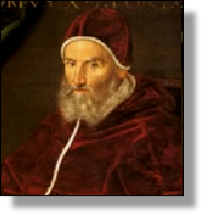 xxxxxAs we have seen, in 46 BC Julius Caesar introduced a purely solar calendar - naming July after himself. Towards the end of the 16th century, however, the small difference between his year and the solar year (just over 11 minutes) had accumulated to a discrepancy of ten days! To rectify this, in 1582 (L1) Pope Gregory XIII (illustrated) issued a decree scrapping ten days. He then introduced the Gregorian calendar in which only century years which were divisible by 400 would be considered leap years, a method which makes the yearly discrepancy just 26 seconds. (Looking somewhat ahead, if, in the year 4,000 "they" scrap one day, then it will be all square again!)

xxxxxUnfortunately, the Gregorian calendar was introduced piecemeal throughout the world, and, even today it is not accepted everywhere - most Arab countries, for example, have retained the Muslim calendar. Within two years of the decree being issued, all Catholic Europe was using this "new style", but Protestant Europe and other countries were much slower in adopting the revised method. Indeed, the Russian Empire did not change until 1918 (by then the Soviet Union), Greece not until 1923, and Turkey not until 1927. 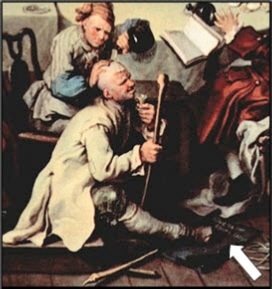 xxxxxBritain finally altered its calendar in 1752, by which time the deficit had risen to eleven days. At the same time the beginning of the year was put back from the 25th of March to the 1st of January. The change caused riots in the streets, with the crowds demanding "give us back our eleven days!" (the 3rd to the 13th of September inclusive). Some people sincerely believed that their lives had been shortened, whilst others that it was a crafty means of changing the Saints' Days. Such fears were clearly unfounded, but there were genuine causes for concern. In the long term, the new calendar was undoubtedly beneficial to commerce and international relations, but in the short term it caused much confusion and dispute over the payment of wages and rents - matters which directly concerned the "man in the street". Illustrated here is a detail from one of the works by the English artist William Hogarth. The leaflet on the floor reads: Give us our eleven days (arrowed).

xxxxxAs stated earlier, there are other, wider complications concerning the change made in 1582. The Gregorian calendar is based on the Christian faith, with AD starting at the year of Christ's birth (though this is now believed to be four years out!). The Jewish calendar, on the other hand, takes 3761 BC as its starting point, the date of the beginning of the world according to the Old Testament. To make matters more confusing - and there are many other discrepancies - the Islamic world regards 622 AD as the beginning of their calendar, the year their prophet Muhammad fled from Mecca to Medina and began his mission.

xxxxxBecause the Gregorian calendar still has months of varying length, a number of proposals for calendar reform have been put forward over the years. In 1954, for example, the so-called World Calendar was discussed by the United Nations but went no further. This suggestion was based on a year of 364 days and 52 weeks with the 365th day ("Year End Day") added without being given a date or day! Leap years would need to have two such days, one in the middle of the year! Then to fit in the correct number of days, the first month of each quarter would have 31 days and all the rest 30. But this would almost certainly interfere with religious festivals and holy days within a number of the world's faiths, not to mention the disruption to global commerce it could cause. Just the idea of programming the world's computers might be sufficient to give the idea a miss!

xxxxxIncidentally, as noted earlier, the change to the Gregorian Calendar in 1582 was only made possible by an accurate knowledge of the year's length. The skilled Danish astronomer, Tycho Brahe, was working at his observatory on the island of Hven at that time. By his observation of the sun, moon and planets over many years, he was able to determine the precise length of the year to within less than a second.