xxxxxThe “Black Hole of Calcutta” was a small cell in which an alleged 123 British personnel were suffocated over the night of 20th June 1756. At that time blame for the incident was put on the Nawab of Bengal, Siraj-ud-Dawlah. The following year Clive regained the city of Calcutta, and then captured and executed Siraj-ud-Dawlah following his victory at the Battle of Plassey. However, a later enquiry into the "atrocity" suggested that the figures had been exaggerated, and that the killings were not a deliberate act, but were caused by negligence. 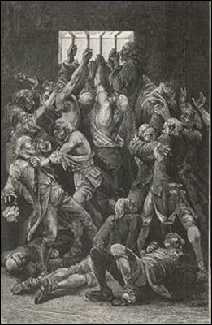 xxxxxAs we have seen, in June 1756 the Nawab of Bengal, Siraj-ud-Dawlah, alarmed at the growing strength of the British garrison at Fort William in Calcutta, sent in his troops to take the city. The fort's governor together with most of his staff and military personnel managed to escape and go on board British ships lying in the harbour. A number were taken prisoner, however, and, according to one account, were herded into a small cell and locked up over the night of June 20th. The room, a lock-up for petty offenders, was barely 18 by 15 feet in size and only had two small windows. In the morning, of the 146 imprisoned only 23 were alive, the rest having died of suffocation.

xxxxxReports of this incident aroused much anger among the British, and resulted in harsh acts of retaliation. Clive returned to India the following year and was assigned the task of regaining the city of Calcutta. This he achieved in the January, and he then went on to gain a resounding victory at the Battle of Plassey in the June. Siraj-ud-Dawlah was captured and executed. Since this time, however, serious doubt has been cast upon the accuracy of this “atrocity”, made by John Holwell, one of the survivors of the Black Hole of Calcutta. A later inquiry put the number of men imprisoned as low as 64 and the death toll at 43. Furthermore, it is now generally accepted that the killings were not intended, but were caused by negligence. Some Indian historians have even suggested that the incident never took place at all, but that is an unlikely suggestion.

xxxxxIncidentally, Calcutta served as the capital of British India from 1773- 1911. The following year the capital was moved to Delhi.