THE BYZANTINE EMPIRE AND THE FALL OF

xxxxxThe Byzantine Empire, established in 330, was virtually destroyed by the Fourth Crusade in 1204. The Crusaders turned against the Byzantines, sacked Constantinople, and divided the empire among the victors. As we have seen, in 1261 (H3) Michael VIII of Nicaea attempted a recovery, but by the end of the 14th century, the empire, centred around Constantinople, was fearing the advance of the Ottoman Turks. The defeat of the Ottomans by the warrior Tamerlane at the Battle of Ankara in 1403 gave a short respite for the empire, but under their two powerful leaders, Mehmed I and then Murad II, the Turks resumed their advance, and by 1451 all but Constantinople had been taken. In 1453 the new Sultan, Mehmed II, captured the city. He established Moslem rule, but he proved to be an enlightened despot. He encouraged religious toleration and rebuilt much of the city. By the time of his death in 1481, as we shall see (1468 E4), the Ottoman Empire covered a vast area in Eastern Europe and the Middle East. Learning within the Byzantine Empire, both in the arts and sciences, was maintained by the Greek and Slav people, or found its way to Italy, whilst Byzantine art and architecture survived in the Orthodox Church.

aaaaaIt was in 330 that the Roman Emperor Constantine, the first Christian emperor, moved his capital to the old Greek city of Byzantium, renamed Constantinople in his honour. When Rome fell to the barbarian invasions in 476 it was the Byzantine Empire - then controlling vast areas of Eastern Europe, the Middle East and North Africa - which took on the defence of the Christian 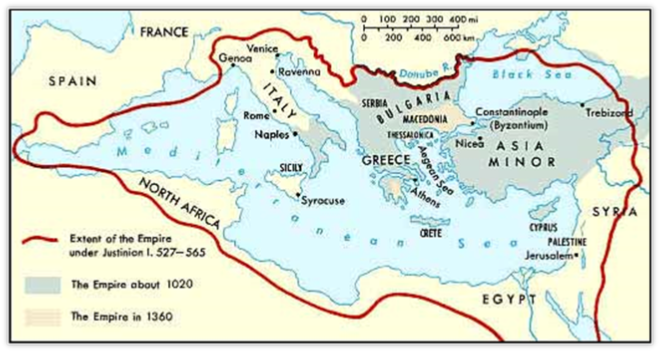 world. This it did with varying degrees of success and failure, but by 1071, following the victory of the Seljuk Turks at the Battle of Manzikert, the fortunes of the Empire were at their lowest ebb. Indeed, the very survival of the empire was in doubt, threatened as it was on all sides.

aaaaaA degree of recovery was made following the success of the First Crusade, but in 1204 the Fourth Crusade turned against the Byzantines. Constantinople was ruthlessly sacked and during the Latin Rule, the Empire was divided up amongst the victors and virtually destroyed. As we have seen in 1261 (H3) Michael VIII, the Greek Emperor of Nicaea, seized the capital and attempted to restore something of its former prestige, but to no avail. By the mid-fourteenth century the Empire was nothing more than an enlarged city state (see map above), besieged on all sides and watching with growing concern the advance of the Ottoman Turks in Anatolia.

aaaaaThe defeat of the Ottomans by the Mongol warrior Tamerlane at the Battle of Ankara in 1403 brought an unexpected respite for the beleaguered Empire, but once Mehmed I had come to power in 1413, the Ottomans were once again on the march. Hexand then his successor, Murad II, becoming Sultan in 1421, continued to expand into south-east Europe. The Byzantine Empire together with Venice and Hungary, did muster a crusader army to attack the Muslims, but on reaching Varna on the Black Sea, the Venetians - having agreed to ship the army to Constantinople - backed out, and Serbia, having promised support, also deserted the cause. As a result the crusaders were literally stranded at Varna and could not withstand the Turkish attack, launched in 1444. Thus by the time of Murad's death in 1451, Venice had been forced to submit; most of the area covered by Thrace, Macedonia, Bulgaria, Greece and Albania was in the hands of the Ottomans; and parts of both Hungary and Serbia had been annexed. 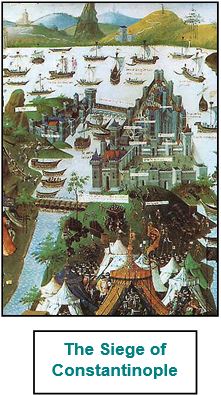 the new Sultan, Mehmed II, came to power in 1451 his plan of action was predictable. He laid siege to Constantinople in April 1453 with a land and sea force of some 150,000 men. Venetians and Genoese were among the city's 8,000 defenders, but by the end of May the walls of the city had been breached by artillery, the capital had fallen, and Emperor Constantine XI was dead. Three days of looting followed, but the city was spared excessive damage, and once in control Mehmed II initiated schemes to improve public buildings and the capital's services. Because many had fled the city, he also sought to bring in people from all quarters of the empire, together with Christians and the large number of European Jews who were fleeing from persecution. To retain these people, the major religious groups were allowed to establish their own communities and were put specifically under the Sultan's protection. Meanwhile, the Ottoman advance continued. By 1460 both Serbia and Morea (southern Greece) were part of the growing Ottoman Empire and, as we shall see (1468 E4), Mehmed II’s later campaigns culminated in an Empire that stretched from the Danube to the Euphrates and from the Crimea to the Aegean Sea.

aaaaaThus came to an end the Eastern Roman Empire, established as early as the 4th Century AD and, at one time, a powerful force throughout the known world. The preservation of ancient Greek manuscripts and the culture they contained was perhaps the most important contribution made by Byzantium. Fortunately, the fall of Constantinople did not mean an end to this precious heritage. The knowledge accrued in literature, philosophy, mathematics, astronomy and history survived among the Greek and Slavic peoples within the new Muslim empire, and was also carried to Italy where it provided the very stuff of which the renaissance movement was being made. And the wealth and beauty of Byzantine architecture and art was not totally lost. Many parts of the eastern or Orthodox world, especially Russia, continued to build in the same style, and the skills required in icon painting and the making of mosaics survived, albeit on a smaller scale.

aaaaaIncidentally, five years after the fall of Constantinople, Aeneas Silvius was elected pope as Pius II (1458-1464). Deeply perturbed by the collapse of the Byzantine Empire, he summoned the princes of Europe to the Council of Mantua in 1460 in order to muster a crusade against the Ottoman Turks. Many declined the invitation, however, and after six months of futile debate the meeting ended in failure. The Republic of Venice - already in decline but with still much to lose in the Aegean - was left to carry on the war single-handed against the advancing Turks. 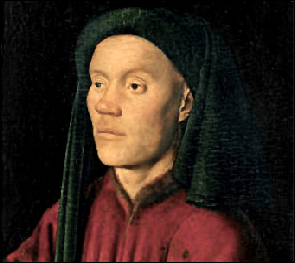 the Muslim victory of 1453, a Lamentation for the Church in Constantinople was produced by the French composer Guillaume Dufay (c1400-1474). He composed several motets to mark important public occasions, including an earlier one to celebrate the dedication of Brunelleschi's dome for Florence cathedral.

aaaaaDufay was probably born in Cambrai in north-west France and showed an interest in music from an early age. He was a chorister in the papal chapel at Rome for some ten years, and on his return to Cambrai in about 1440 he supervised the music of the cathedral there, making it an important centre for musical study. Of his surviving works, there are two magnifcats, over eighty motets, and sixty-six secular songs in French or Italian. It is in his composition of masses, however, that he made his greatest contribution. A celebrated artist of his day, he was one of the first masters of counterpoint and is regarded today as a leading composer of the early Renaissance. 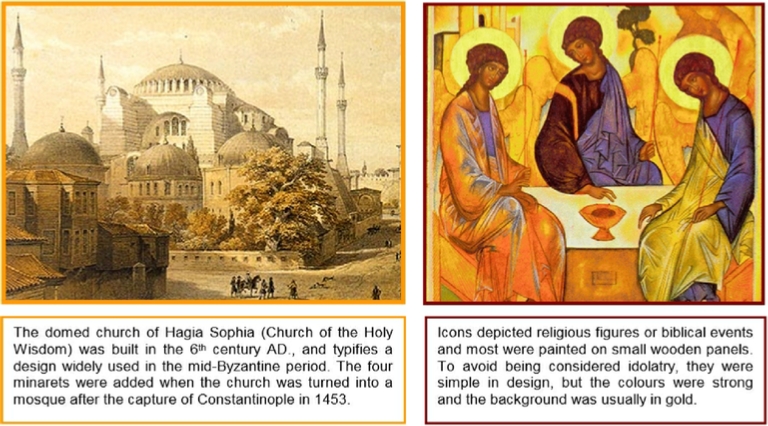