xxxxxThe Byzantine Empire, founded in 330, became the bulwark of Christian defence following the fall of the Roman Empire in 476, but by 1071 it was threatened on all sides by the Seljuk Turks, the Normans, and the Pechenegs from eastern Europe. The arrival of the Crusaders gave some security, but the Fourth Crusade in 1202 (JO) turned upon Byzantium itself and brought it down. Under an ineffectual Latin Rule, the victors divided up the empire between them and continued their plundering. In 1261, however, Michael VIII, the Greek emperor of Nicaea, managed to retake Constantinople and, bringing an end to Latin Rule, attempted with some success to re-establish Byzantium. At the Council of Lyon in 1274 he even proposed a union of his church with that of Rome in order to revive the Empire, but this proved unacceptable. And despite all his efforts, his reforms were insufficient. The Turks continued their gradual advance into Asia Minor. The capital was besieged in 1395 and, as we shall see, eventually fell to the Ottomans in 1453 (H6), together with the remnants of a once large and powerful Empire. 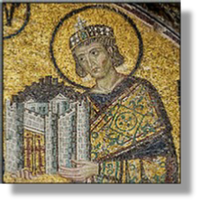 xxxxxIt was in 330 that the Roman Emperor Constantine (illustrated), the first Christian emperor, moved his capital to the city of Byzantium, renamed Constantinople in his honour (and today known as Istanbul in Turkey). When Rome fell to the barbarian invasions in 476 it was the Byzantine Empire - then controlling vast areas of eastern Europe, the Middle East and North Africa - which took on the defence of the Christian world.

xxxxxThis it did with varying degrees of success and failure, but by 1071, following the victory of the Seljuk Turks at the Battle of Manzikert, the fortunes of the Empire were at their lowest ebb. Indeed, the very survival of the empire was in doubt, threatened as it was on all sides. Whilst the Seljuk Turks were now strengthening their hold on Anatolia, the Normans, based in southern Italy under their leader Robert Guiscard, were invading Albania, and the Pechenegs, a nomadic people from Eastern Europe, were spreading out from the Balkans. 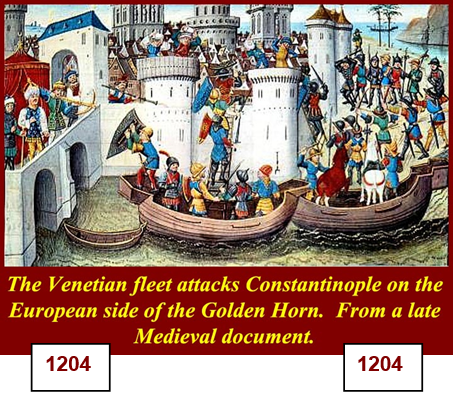 xxxxxIt was at this time, however, that two Emperors, Alexius I and John II, staged a recovery. An appeal to the West brought help from the Crusaders, and a consequent halt to the Turkish advance, whilst victories against the Normans and the Pechenegs secured the Empire and restored some of its former prestige. But the recovery was short-lived. Ironically, it was the Christians from Western Europe who dealt the first blow to their hopes of survival. As we have seen, in 1202 (JO) the Fourth Crusade turned upon the Byzantines and ruthlessly sacked their capital, Constantinople. The Byzantines - those who survived - were driven into exile, and took refuge across the Bosphorus in the city of Nicaea (now Iznik) or at Epirus in what is now north-west Greece.

xxxxxThe period of Latin Rule that followed was a total disaster for the city of Constantinople and what was left of its dwindling empire. The crusaders installed one of their own as emperor, Baldwin of Flanders, and control of the Church was taken over by the Venetians. The realm itself was divided up amongst the victors, and any unity that had existed within the empire was quickly lost. Meanwhile, in Constantinople the killing and the plundering went on for years and left the city in a state of ruin. 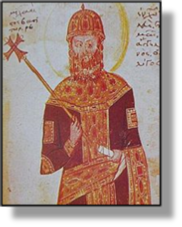 xxxxxHowever, in 1261 Michael VIII, the Greek emperor of Nicaea, a cunning and resourceful ruler, managed to retake Constantinople and bring an end to the Latin Empire. He made every effort to repopulate the city, rebuild its defences, and bring about a revival of trade, but he was beset with problems from within and without. In order to gain papal support and thus discourage any attempts by the West to recover lost ground, he even proposed the unity of his Church with that of Rome at the Council of Lyon in 1274. But the pope was not convinced and, within the empire itself many of his subjects were not in favour of such a move. Furthermore, Turkish raiders were beginning to infiltrate into the fertile valleys of western Anatolia (arrowed on map). The Byzantine Empire was fast becoming an empire in name only. Its days were numbered. It was soon to be nothing more than an enlarged city state, besieged on all sides.

xxxxxBy the fourteenth century, the Ottoman Turks had replaced the Seljuk Turks as the dominant force in the area. As we shall see, under their leader Orhan (1345 E3) they quickly drove the Byzantines out of Anatolia, and by 1395 they were laying siege to the Byzantine capital. However, it was not until 1453 (H6) that Constantinople, once a major world trading and cultural centre, eventually fell to the Muslim enemy, together with the sorry remnants of a once large and powerful empire.