xxxxxLancelot Brown started his career at Stowe House, Buckinghamshire, working alongside the architect-cum-landscape gardener William Kent. Under his guidance he became a brilliant creator of the natural garden, a style which provided grand vistas of curving lawns and paths, clumps of artistically placed trees, and features such as lakes and rivers. All this was in marked contrast to the geometric layout of stately gardens in France at this time, hallmark of the French designer André le Nôtre. In 1749, Brown set himself up in business, and by 1751 he was attracting a large clientele. He ended up by designing vast, informal gardens for nearly all the stately homes in England, including Longleat House, Blenheim Palace, and Chatsworth House. Because of his keen eye for the "capabilities" of a terrain, he was dubbed "Capability Brown", and this name has stuck. He died a successful and wealthy man and, later in the century, was succeeded in his profession by the Englishman Humphry Repton. 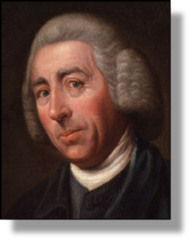 xxxxxDuring the middle of the 18th century, the leading English landscape artist Lancelot Brown gained a wide and well-deserved reputation for his planning of the gardens of stately homes across England. Among the hundred or more grounds which benefited from his advice were Petworth in West Sussex, Blenheim in Oxfordshire, Stowe in Buckinghamshire, Longleat in Wiltshire, Chatsworth in Derby, and Warwick Castle. His natural, "English" style became popular throughout Europe and was widely imitated.

xxxxxBecause of his keen eye for the "capabilities" of a natural landscape (we would call it "potential" today!) he acquired the nickname "Capability Brown", and this name has stuck. It is a measure of his success that he is still remembered by many people today, long after more influential figures in history have been forgotten! His informal but, be it noted, planned design, catered for curving lawns and paths, groups of trees, artistically placed, and "natural" features like lakes, rivers and sloping hills - all in marked contrast to the rigid, geometric layout of the current style in France, hallmark of the French designer André Le Nôtre.

xxxxxWilliam Kent (1684-1748) was the creator of the "English" natural garden, a style which was enthusiastically adopted by Capability Brown when he worked with him at Stowe House, Buckinghamshire. But Kent had spent ten years studying painting in Rome and, on his return in 1719 became an accomplished architect and interior designer. Together with his patron, the Earl of Burlington, he played an important part in introducing the strictly classical Palladian style into Britain. His masterpiece was Holkham Hall, Norfolk, where he was one of the first English architects to design an entire house, including fittings and furnishings. His work in London included the Treasury and Chiswick House, planned with Burlington and based on the Villa Rotonda, the famous work of the Italian architect Andrea Palladio. In 1727 he published a book of Designs by the London architect Inigo Jones. 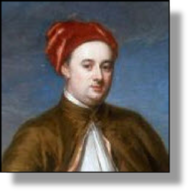 xxxxxThe English garden designer William Kent (1684 -1748), with whom Capability Brown worked at Stowe in the 1740s, was the man who "freed the English garden from formality". He worked on the principle that "Nature abhors a straight line". Regarded by some, notably the English writer Horace Walpole, as "the father of modern gardening", his natural, informal style was enthusiastically adopted by Brown and developed on a large scale.

xxxxxBut Kent was also an accomplished architect and interior designer, and had studied painting in Rome for ten years. On his return in 1719 he worked alongside his patron, Richard Boyle, the Earl of Burlington, and both played a leading part - like Inigo Jones before them - in introducing the Palladian style of architecture to Britain. One of his first assignments was the decoration of Burlington House in Piccadilly, London, and, on completion, it was here that he lived for the rest of his life. But Kent's finest

example of the strict classical design perfected by the Italian architect Andrea Palladio, is to be seen in the richness and grandeur of his work at Holkham Hall in Norfolk (illustrated), carried out in the 1730s. Here, he was one of the first English architects to design a house in its entirety, with the interior design incorporating furniture and fittings.

xxxxxAppointed master carpenter in the Office of Works in 1725, his designs in London included the Treasury, Horse Guards Building in Whitehall, and Chiswick House, designed in collaboration with Burlington, and based on Palladio's Villa Rotonda. In 1727, a few years before beginning his career in architecture, he edited and published a book of Designs by the London architect Inigo Jones.

xxxxxIncidentally, Kent was a friend of the poet Alexander Pope, and helped him to design his garden at his country retreat, Pope's Villa, at Twickenham, then a small town just outside London.

xxxxxBrown was born at Kirkharle, Northumberland and worked as a local gardener's lad before gaining a place at Stowe House, Buckinghamshire, then having one of the finest gardens in the country. It was here that he worked with and under the guidance of William Kent, the recognised creator of the English natural garden. In 1749 he set himself up as an independent consultant on landscape gardening and by 1751 his business had taken off. Over the next twenty years and more he advised on the development of nearly all the large and imposing gardens in England. On occasions, he also created architectural features within his parkland, and turned his hand to the design of a building, as in the case of the chapel at Compton Verney in Warwickshire.

xxxxxBrown died a wealthy and well respected man, renowned for the quality and extent of his work. As the foremost landscape gardener in England, he was succeeded towards the end of the century by Humphry Repton, who modified Brown's style somewhat by the introduction of what was termed the “Picturesque Mode”, a movement led by Sir Uvedale Price and the writer and artist William Gilpin.

xxxxxIncidentally, one of the devices used by Brown in his planning was the "ha-ha", a boundary wall built in a ditch. This not only served as a barrier to horses and cattle, but also provided the master of the house - and his family and visitors - with an unobstructed view of the garden and parkland beyond!