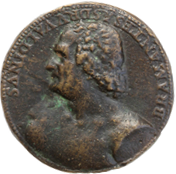 born near Urbino, and it was probably in this city that he received his training, first as a painter and then as an architect in the workshops of the Ducal Palace. He moved to Milan in the late 1470s, where he worked for the new duke, Ludovico Sforza. Notable here was his enlargement of two churches, Santa Maria presso San Satiro and Santa Maria della Grazie. In the first, he overcame a limited site by constructing a false choir at the end of the nave in order to give the appearance of greater depth, a device used for the first time. In the second, his building of the choir and cupola was influenced by the classical style of the Florence Renaissance, but his floor plans and decoration were reminiscent of Byzantine design.

xxxxxIt was while in Milan that Bramante became a close associate of Leonardo da Vinci. They had met when Leonardo had travelled from Florence in 1482, and later both men worked together trying to solve a structural problem in Milan cathedral. Later, in 1493, Bramante visited Florence to study the works of Brunelleschi.

xxxxxWith the fall from power 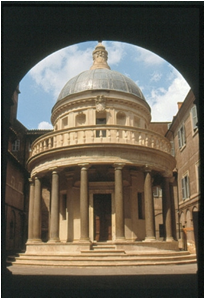 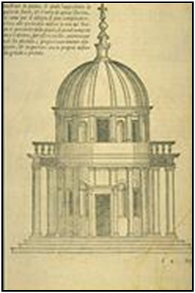 Ludovico Sforza in 1499, Bramante left for Rome, and it was here that he lived and worked for the rest of his life. Once settled in, he became deeply inspired and influenced by the impressive, imposing monuments of ancient Rome, a fact clearly to be seen in his first major work here, the Tempietto (illustrated together with plan). Built in the courtyard of the church of Santa Pietro in Montorio - allegedly on the site where Saint Peter was crucified - it was the first piece of Renaissance architecture to imitate in detail a circular domed temple of antiquity. The structure is thought to have been modelled on the Roman Temple of the Sibyl in Tivoli. One of the few of his major works to have been fully completed, it illustrates to perfection the style of the High Renaissance, somehow combining the severity and dignity of a Roman monument with the elegance and authority of a new age. Likewise his Palazzo Caprini, completed in 1510, influenced the style of palace architecture throughout the century.

xxxxxThe coming in 1503 of the new pope, Julius II, with his ambitious plans for Rome, brought new opportunities for Bramante. Appointed architect and town planner, he widened roads, constructed large squares, and improved the port facilities. But what might have been Bramante’s greatest contribution to the grandeur and beauty of Rome came when the pope decided to press ahead with the rebuilding of the church of St. Peter. The need for a new church was long overdue. The old one was in a dilapidated state, and was no longer big enough to cope with the vast number of pilgrims who came to visit. 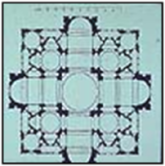 as the chief architect, Bramante’s plans envisaged a large square building, surmounted with a central dome and surrounded with bell towers and small domes at each corner. It was one of the greatest building projects yet conceived. Work was begun in 1506, but the old church had first to be removed, and before the new structure took shape Julius died (1513) and Bramante a year later. As we shall see, the design was then revised by Michelangelo (1512 H8), and it was the Swiss-Italian architect Carlo Maderno who built the church in its present form. Likewise, Bramante's plans for an extension to the Vatican Palace - with a succession of courtyards and elevated terraces - never got off the drawing-board.

xxxxxBramante’s architectural achievements - including, indeed, buildings planned but never completed or even started - mark him out as one of the giants of the High Renaissance in Italy. He looked back to antiquity for inspiration, but he captured in his work the confidence and the spirit which typified the movement of change that was abroad.

xxxxxThe Italian architect Donato Bramante moved to the city of Milan in the 1470s, where he was employed by Ludovico Sforza on a number of works. It was here that he worked with Leonardo da Vinci, trying to solve a structural problem in the city's cathedral. In 1493 he visited Florence to study the works of Brunelleschi, and six years later settled in Rome. Here he was inspired by the structures of ancient Rome, as can be seen in one of his finest works, the Tempietto, the first imitation of a circular, domed temple. Soon after 1503, the new pope, Julius II, appointed him the city's town planner, and in this capacity he improved roads and constructed large squares. His great opportunity came in 1506 when he was put in charge of the rebuilding of St. Peter’s church. His plan envisaged an impressive square building, surmounted with a central dome and surrounded with bell towers and domes at each corner. Work was begun in 1506, but before the site was even cleared, both Julius and Bramante were dead and the plan was redesigned, first by Michelangelo (1512 H8) and then by Carlo Maderno. Bramante also planned an ambitious extension to the Vatican Palace, but this never got off the drawing board.

xxxxxPope Julius II (1443-1513) took office in 1503, determined to restore the power and prestige of the papal states. This he did. He openly opposed the Borgias, Rome's ruling family, and, by going to war and forming the Holy League in 1511, he succeeded in driving the French out of Italy. But today he is best remembered for his patronage of the arts. He it was who, along with Bramante, improved the architectural beauty of Rome, and he it was who commissioned Raphael to produce his frescoes in the Vatican apartments, and prevailed upon Michelangelo to paint the ceiling of the Sistine Chapel. In addition, he began the vast collection of precious antiquities which adorn the Vatican today. 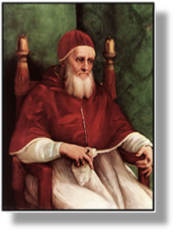 was elected Pope in 1503 after an eventful career in ecclesiastical politics, made the more so by his dogged opposition to the Borgias, the ruling family in Rome. Determined to restore the power and prestige of the papal states - ruined by the Borgias - and to drive the French out of Italy, he embarked upon an aggressive “foreign policy”. Virtually casting himself in the role of a warrior, he conquered Perugia and Bologna, joined the League of Cambrai against the city state of Venice, and in 1511 formed a Holy League which eventually managed to expel the French. By the year of his death the papal states had been re-united and enlarged, and Julius had come to be regarded as the saviour of Italy. (The portrait is by the Italian artist Sanzio Raphael.)

xxxxxBut despite this impressive record “on the battlefield”, as it were, Julius is best remembered to day for his patronage of the arts. No pope before or since has made such a significant contribution in this regard. It was he who, in 1505, made the decision to demolish Rome’s ancient basilica and replace it with the largest and finest church in the world (completed, in fact, in 1626). But quite apart from this and other architectural splendours achieved or planned in Rome - due in large part to his close association with Bramante - he was also patron and friend of some of the greatest Renaissance artists of his day. It was he who commissioned Raphael to paint his famous frescoes in three rooms of the Vatican apartments, and it was he who prevailed upon Michelangelo to paint the ceiling of the Sistine Chapel, the splendours of which were revealed in 1512 just a few months before the pope's death. A man of passion and vision, he was also responsible for the beginning of that vast collection of antiquities for which the Vatican is now renowned world-wide.

Incidentally, it was Julius II who, in 1506, officially founded the Swiss Guard in order to provide a permanent corps of soldiers to protect the Pope.

xxxxxAs we have seen, while in Milan Bramante did much work for Ludovico Sforza. He was a member of the Sforza family which ruled the city for almost a century. The family earned the reputation of being despotic and extravagant, but some of its members were great patrons of the arts. Ludovico ruled Milan for close on nineteen years, but was driven from power by the French in 1500. A cunning ruler, he made Milan supreme among the city states, cultivating the friendship, among others, of Lorenzo the Magnificent, the Medici ruler of Florence, and the Borgia pope, Alexander VI. As a patron of the arts, he made Milan a leading centre of the Renaissance, attracting to his court, as we have seen, leading figures like Bramante and Leonardo da Vinci. He it was who commissioned Da Vinci’s Last Supper. 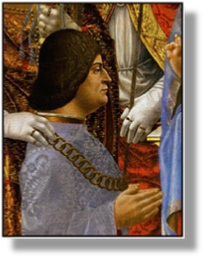 during his years in Milan, Bramante did a great deal of work for Ludovico Sforza (illustrated). He was a member of the Sforza family that ruled Milan for close on one hundred years. The founder of the “dynasty”, a prosperous farmer called Muzio Attendolo from the region of Ravenna, assumed the title Sforza (meaning “Force”) and ruled Milan until his death in 1424. His illegitimate son Francesco succeeded him, and became the Duke of Milan by marriage. The family earned a reputation for being despotic and extravagant. Galeazzo Maria, in particular, appointed Duke of Milan in 1466, -was a particularly cruel and vicious ruler, despite gaining fame as a patron of music. He presided over a terrified court until assassinated in 1476.

xxxxxLudovico,xGaleazzo’s younger brother, seized power in 1481 and was ruler of Milan until the French occupied the city in 1500. He then spent his last eight years imprisoned in France. Nicknamed “The Moor” because of his dark complexion, he proved a cunning leader who, taking advantage of conflicting rivalries, established Milan’s supremacy among the city states. Among those whose friendship he cultivated were Lorenzo the Magnificent, the Medici ruler of Florence, and the Borgia pope, Alexander VI. Unlike his brother, he did much to encourage scholarship and the arts. Under his patronage Milan became a leading centre of the Renaissance, attracting to its court leading figures like Bramante and Leonardo da Vinci. And it was Ludovico who commissioned Da Vinci’s Last Supper.