xxxxxForced to seek peace out of sheer exhaustion, the Treaty of Brétigny in 1360 marked the end of the first phase of the Hundred Years’ War between the French and English. By it, France had to pay a huge ransom for the return of their King John II (captured at the Battle of Poitiers), and Edward III renounced all claim to the French throne but retained the large province of Aquitaine in south-west France. As we shall see, with the death of John II in 1364, his successor denounced the agreement and reopened the conflict. This time, events were to favour the French. 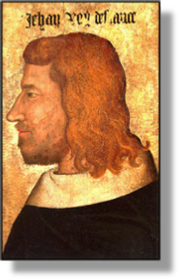 xxxxxThe Treaty of Brétigny, of May 1360, negotiated on the English side by the powerful Duke of Lancaster, marked the end of the first phase of the Hundred Years’ War. Under its terms a large ransom of some three million gold crowns was to secure the release of the French King, John II, (then living in the lap of luxury in England), and Edward, in return for renouncing all claim to the French throne, was to retain the large area known as Aquitaine (Guyenne) in south-west France.

xxxxxIn many ways both countries had been forced to the negotiating table by sheer exhaustion, but the French, above all, were anxious to bring the conflict to an end, even though the terms were really weighted in favour of the English cause. As we have seen the Jacquerie uprising - emerging from the utter disorder which came about in France during the absence of King John - almost brought the country to its knees. Bankrupt and king-less, France was anxious to gain a period of respite. 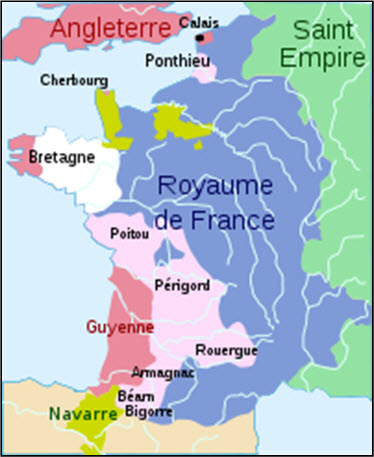 xxxxxBut the treaty did not end in quite the way intended. At the definitive Treaty of Calais, held in October, the terms agreed at Brétigny appear to have been somewhat postponed. Nevertheless, the Black Prince began to take control of Aquitaine (Guyenne) and King John made his way to Calais where the first part of his ransom was duly paid. At this point, however, the Estates General, the French parliament-in-the-making, failed to come up with the rest of the ransom, and one of the hostages chosen to stand instead of the French king - his son in fact - made his escape. King John, taking the honourable way out, returned to London voluntarily and resumed his captivity! There can be but few cases like that in history! Perhaps that is why he is nicknamed John the Good!

xxxxxAs we shall see, when John II died in 1364 his son and successor, Charles V, renounced the Calais agreement and reopened the conflict. This time, however, the cards of fortune were stacked in favour of France. Edward III took no part in the conflict and his two sons, Edward and John proved no match for the French forces which slowly nibbled away at the English possessions. The Massacre of Limoges sealed the loss of Aquitaine, and by the end of Edward III’s reign only a few isolated areas were still left in his hands.

xxxxxMuch of the success of the French in the period leading up to the Treaty and Truce of Bruges (1375-1377) was due to the skill of their military leader Bertrand du Guesclin (c1320-1380). He adopted guerrilla tactics, avoiding set battles until he had the advantage in numbers and/or position. By so doing, he won a series of victories which slowly but surely edged the English out of Aquitaine. He was appointed to the highest military position, Constable of France, in 1370, and became a national hero.

xxxxxAs we shall see, there followed a fairly long period of uneasy peace, both countries having to cope with unrest at home. It was not, in fact, until 1413 that the newly-elected king of England, Henry V, determined to take advantage of continued disturbance in France, laid claim once more to the French crown and prepared an army with which to take it.

xxxxxIncidentally, it was in the reign of the French king John II that the very first franc was issued. Produced in 1360, it was a gold minted coin which had inscribed upon one side the words: Johannes Dei gratia Francorum rex (John, by the Grace of god, king of the Franks). On the other side there was an engraving of the king on horseback (illustrated). Later this coin became known as the franc à cheval to distinguish it from the franc issued by Charles V which shows the king standing - franc au pied! ……