xxxxxAs we have seen, with the breakdown of government in England following the departure of Richard Cromwell in 1659, a section of the army (led by General George Monck) marched to London and organised the return of the monarchy in the person of Charles II - a fairly popular move. Before returning the king issued The Declaration of Breda in 1660 in which he promised a number of measures, including a general amnesty and freedom of religious conscience. The terms of such matters, he affirmed, were to be left to a “free parliament”. He was warmly received on his return at the end of May, but, as we shall see (C2), his reign was to be one of mixed blessings and broken promises.

xxxxxWith the departure of Richard Cromwell in 1659 - a figurehead if nothing else of the republican government - and the continued wrangling between Parliament and the army (both in themselves divided over the best policy to adopt), it was clear to many, and particularly those in authority, that the country was quickly sliding into anarchy. General George Monck, commander-in-chief in Scotland and one of Oliver Cromwell's ablest soldiers, took the initiative and in January 1660 marched his powerful army to London. This timely show of force was sufficient to restore order. The Rump Parliament was dissolved, and a new parliament elected with the express aim of inviting Charles Stuart, eldest son of Charles I, to return to England as king. 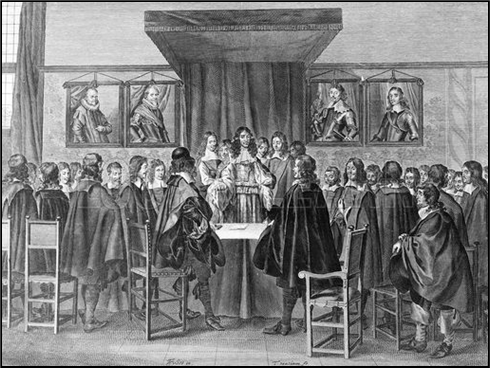 xxxxxIn fact, the majority of the people in the country now favoured the return of the monarchy in the interests of stability and continuity. In their experience, any way, it was the only legitimate form of government. And there were many, too, who found life oppressive under the strict social reforms introduced by their puritan masters, and hoped for a return to the "good old days" (though they had not always been so good!). Before returning to England, however, the exiled Charles II, on the advice of both his advisor Edward Hyde and General Monck, issued the Declaration of Breda in 1660 (illustrated). This set out the terms for his acceptance of the throne but was, in effect, a statement promising a number of measures, including a general amnesty, a fair settlement of all land disputes, the payment of arrears to the army and, in the matter of religion, freedom of conscience. And the details of these terms were to be left, be it noted, to a "free parliament".

xxxxxCharles Stuart was proclaimed king on the 8th May 1660. He received a warm welcome when he landed at Dover on the 25th and entered London amid widespread rejoicing on the 29th, his 30th birthday. As we shall see (C2), his reign was to be one of mixed blessings and broken promises.