xxxxxIn 1689 the deposed king, James II, as promised, returned to regain his throne. He landed in Ireland and presided over a parliament in Dublin, restoring Catholic lands confiscated since 1641. He then drew up his army of 21,000 - including 7,000 French infantry - on the southern bank of the River Boyne, near Drogheda, and it was here that the battle was fought in 1690. William’s army, some 35,000 strong, took up a position on the other side of the river and opened the attack. A force crossed the river a little upstream, and when the French moved to meet it, William launched his cavalry in a frontal assault against James’ depleted army. The Irish fought well, but eventually superior numbers decided the day, and they and the French were driven from the field. James escaped to France and the last resistance was overcome in 1691 with the Treaty of Limerick. For the time being, Jacobite rebellion was at an end. 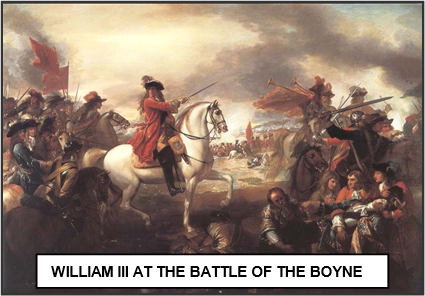 xxxxxAs we have seen, when James II fled to France in December 1688 he vowed to return to recapture his rightful throne. True to his word, in March 1689, after obtaining a promise of aid from Louis XIV of France, he landed in Ireland, where he was assured of a large number of Catholic supporters. He laid siege to Londonderry - where many Protestants had taken refuge - but failed to take the city through lack of artillery, and abandoned the attempt in July. During the siege, however, he presided over a parliament in Dublin by which he restored all Catholic lands confiscated since 1641. After some 7,000 French infantry had arrived in March 1690 - bringing his force up to 21,000 men - he took up a defensive position near Drogheda on the southern bank of the River Boyne, and awaited the arrival of the "royalist" forces.

xxxxxWilliam III, the newly acclaimed king of Great Britain, landed in Ireland with an army of some 35,000 men, made up of British and Dutch troops and two regiments of Huguenots refugees. He marched south and, on reaching the River Boyne, despatched a force across the river at Rosnaree, a 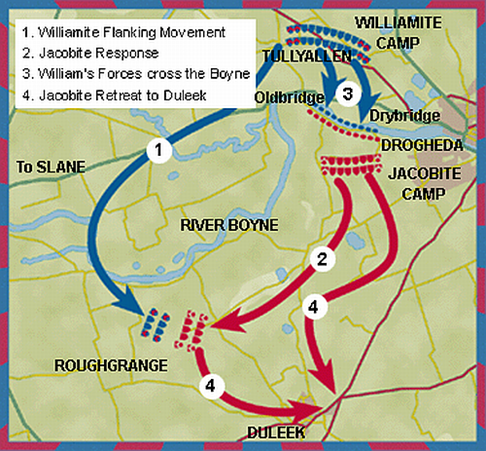 few miles upstream of James' position. His aim was to encircle the catholic force. The French turned to counter this attack, and William then launched his cavalry across the river in a direct assault upon James' depleted army. The Irish foot soldiers and cavalry fought well, and for a brief while the battle hung in the balance. Eventually, however, William's superior numbers decided the day. They put the Irish and French to flight, and James was once again obliged to escape to France. He had lost a battle and a kingdom. And he also lost 1500 men, whilst the loses on the royalist side were no more than 500.

xxxxxThe Irish forces quickly regrouped, however, and William, proving unable to capture Limerick, returned to England. Itxwas not, in fact, until June of 1691 that his generals, winning the Battle of Aughrim, and then forcing the surrender of Limerick, brought the rebellion to an end. The Glorious Revolution with its Protestant monarch remained in place. ThexTreaty of Limerick of October 1691 was not a particularly harsh settlement. Roman Catholics retained a certain amount of religious freedom, and the land they had held under Charles II was restored to them. However, within a short while the Irish parliament had re-enacted the Penal Laws, excluding Catholics from property and positions of authority, and the English parliament had annulled the land concessions and placed further restrictions on trade with Ireland, hastening the country's economic decline. 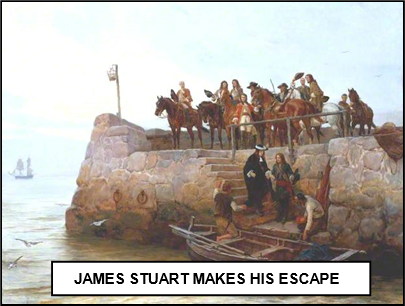 xxxxxFor James II it was the end of the royal road. There followed a number of plots to overthrow William III, but they came to nothing and James remained in exile until his death in 1701. As we shall see, however, for his followers, the Jacobites, there were to be two further armed attempts to restore the Stuarts to the British throne, the first by his son, the “Old Pretender” in the Fifteen Rebellion of 1715 (G1) and the second by his grandson, the “Young Pretender”, popularly known as Bonnie Prince Charlie, in the Forty-Five Rebellion of 1745 (G2).

xxxxxIncidentally, whilst the land battle went William’s way, at sea the French defeated an Anglo-Dutch fleet and set fire to Teignmouth on the Devon coast. ……

xxxxx…… The anniversary of the Battle of the Boyne is still celebrated today by the Orangemen of Northern Ireland - the supporters of William of Orange. They are members of the Orange Society which was formed in 1795 with the express aim of maintaining British rule and Protestant supremacy in Ireland. The celebration of this victory has sometimes led to sectarian violence. ……

xxxxx…… The painting of the battle above - with King William III centre stage - is by the celebrated American artist Benjamin West.