xxxxxAndré Charles Boulle, one of the foremost French furniture designers, was appointed cabinet maker to Louis XIV in 1672. All his furniture was produced in an extremely ornate baroque style, and included intricate carving, an abundance of decorative motifs, and inlays of exotic woods, tortoiseshell, marble and metals. As such, these sumptuous pieces added to the grandeur of the Palace of Versailles, and the pomp and ceremony which surrounded the king’s court. He was particularly renowned for the quality of his armoires (large cupboards), and his commodes (chests of drawers). Unfortunately the private study he lavishly furnished for the dauphin was destroyed by fire, as were the drawings he had collected over the years, including some by the master painters Raphael and Rubens. 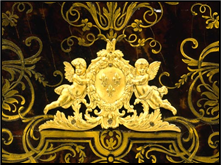 xxxxxAndré Charles Boulle was one of the most famous of French furniture designers. As ébéniste du roi (cabinet maker to King Louis XIV), appointed in 1672, he was soon put to work at Versailles. Here he became the most skilful exponent of an extremely ornate baroque style in the making of cabinets, chairs, desks and the like. As a master in the art of marquetry, he used not only inlays of exotic, colourful woods to depict landscapes, flowers and geometric designs, but also inlays of tortoiseshell, marble and metal - such as brass, copper, pewter and silver. Work of this kind has since come to be known as buhlwork or boulle in the world of furniture making. 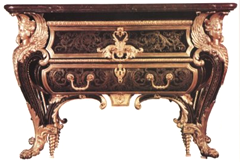 xxxxxIt follows that, in this grandiose style of furniture, the shape of the piece took second place to the extravagance of its decoration. In addition to inlay work and veneering, the carving, scrollwork and mouldings were most intricate and replete with decorative motifs, like shells, cherubs, dolphins and garlands of flowers. And to provide further embellishment, heavy but decorated mounts of gilt bronze or other metals were often added to protect corners, the edges of marquetry work, and keyholes. Indeed, some items of furniture were completely overlaid in silver! At Versailles, in short, Boulle and his assistants did for furniture what - as we have seen - Le Brun did for the palace, and Le Nôtre did for the gardens. A sumptuous, extravagant style, it was a fitting complement to the pomp and ceremony which took place at the court of the Sun King. Illustrated here is a commode, made for the king's bedroom at Versailles. 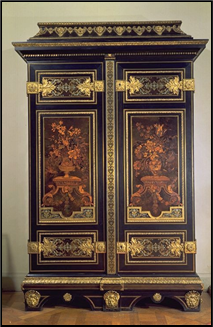 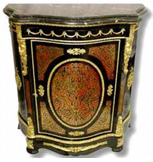 xxxxxAs a young man, Boulle studied drawing, painting and sculpture. He opened a shop in Paris in 1664 and this was so successful that in 1672 he was chosen as the next royal cabinetmaker at Versailles, and given an apartment in the Louvre. Among his pieces of furniture, he was particularly renowned for his armoires (large cupboards), and his commodes (chests of drawers). But famed though he was for his furniture designs and decorative work - exquisitely produced at the Gobelins factory in Paris - he gained particular esteem at the time for his brilliant work in the dauphin's private study. This work, sadly destroyed by fire in the early 1680s, was admired for the high quality of its marquetry and panelling, and, above all, for the skill shown in the making of its wooden, mosaic floor.

xxxxxApart from working for the crown, Boulle welcomed private customers and received commissions, among others, from Philip V, king of Spain, and the duke of Bourbon. He was assisted in his work by a collection of master drawings he had acquired over the years, including some by the Italian artist Raphael and the Flemish artist Rubens. Unfortunately, all these drawings were destroyed by fire in 1720. On retirement he left his studio to his four sons, two of whom became cabinetmakers of distinction.

xxxxxBoulle’s contemporary, Jean Bérain the Elder (1637-1711), was the royal designer, responsible for furniture, costumes and tapestries for both interior decoration and court functions like operas, festivals, and theatre performances, including plays by Molière. A pupil of the brilliant decorator Charles Le Brun, his mixture of ornate Baroque and classical grandeur did much to create the Louis XIV style. His designs were widely used, particularly in furniture and the decoration of porcelain. 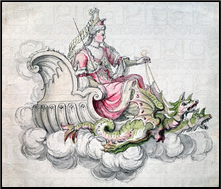 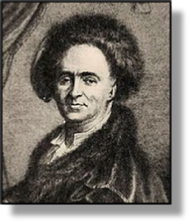 xxxxxBoulle's work, particularly in marquetry and the choice of motifs, owes much to the designs of his fellow countryman Jean Bérain the Elder (1637-1711) (illustrated). It was just two years after Boulle became cabinetmaker to Louis XIV in 1672, that Bérain was appointed the king's royal designer. In that capacity he was responsible for designing the furniture, costumes, tapestries and accessories not only for interior decoration, but also for a wide variety of court functions, such as operas, festivals, official ceremonies, and theatre performances - including plays by the French writer Molière. 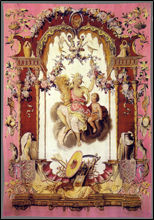 xxxxxBérain, a pupil of the brilliant decorator Charles Le Brun, was regarded highly by his contemporaries. His decoration and refurbishment of the rooms, halls and galleries at Versailles did much to maintain and develop the sumptuous mixture of ornate Baroque and classical grandeur which came to be known as the Louis XIV style. A draughtsman, painter and engraver by training, he successfully provided that aura of splendour demanded by the king, either by means of florid, fussy decor within the palace interior, or by creating the sense of theatre required for occasions of grand entertainment. His work gained a European reputation, and his designs were widely used, particularly in furniture and the decoration of porcelain.