xxxxxIn 1788 Captain Arthur Phillip (1738-1814) arrived at Botany Bay, New South Wales, with 760 convicts to open up the first penal settlement in Australia. He eventually chose a site at Sydney Cove in Port Jackson, near to Circular Quay in modern Sydney. Over the next forty years, other settlements were established, including ones at Norfolk Island, Tasmania (then Van Diemen’s Land) and Moreton Bay, near Brisbane. Despite extreme hardship and outbreaks of violence, Phillip, the first governor of New South Wales, managed to set up a permanent community and, later, conditions somewhat improved as sheep, cattle and arable farming were introduced. Meanwhile, convicts who had served their time, together with legal immigrants, formed colonies in Victoria, Southern Australia and around Perth on the west coast. As we shall see, exploration of the interior was to begin in earnest around 1840, at the beginning of the Victorian Age (Va), and it was to be during this period that gold was discovered in a number of areas. 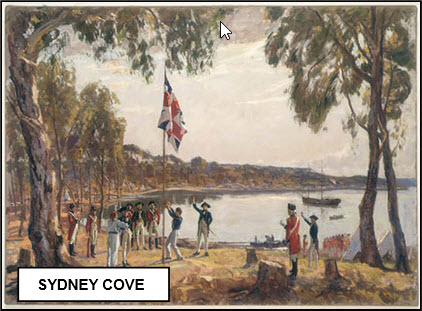 xxxxxIn 1783, following the victory of the colonists in the American War of Independence, the British Government had to find an alternative site for its penal settlement - an area to which criminals could be “transported”. It chose the newly discovered colony of New South Wales, situated in the land then known as Terra Australis Incognita on the other side of the globe.

xxxxxThus it was that Captain Arthur Phillip (1738-1814) arrived off the shores of Botany Bay in January 1788, with 760 convicts and some 200 marines aboard eleven ships, six of them transport vessels. He landed close to the spot where the English explorer James Cook had first set foot on the continent in 1770, but decided that the area was unsuitable for settlement. (Though for some years hence the name “Botany Bay” was often used as a general term for a convict station). A few days later he moved five miles up the coast to Port Jackson, situated in what he described as “the finest harbour in the world”. Here he made his settlement at “Sydney Cove” (illustrated), named after the then Home Secretary (close to the present Circular Quay in Sydney), and raised the flag on the 26th January - now remembered as “Australia Day”.

xxxxxIn 1803 Phillip opened a second site on Norfolk Island, mainly for hardened criminals, and later Van Diemen’s Land - renamed Tasmania in 1854 - was made a penal extension. But settlement was not confined to the south. In 1825 New South Wales set up a separate penal colony at Moreton Bay, near Brisbane - the future capital of the new colony of Queensland, established in 1859. 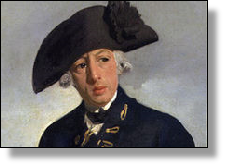 xxxxxAs can be easily imagined, the early years of settlement proved a period of immense hardship. A large number of convicts, the vast majority of whom were poorly educated and motivated, were hardly an ideal population on which to build a flourishing society. However, as the colony’s first governor, Phillip (illustrated) managed to create a permanent community, despite outbreaks of disorder among convicts and troops, and the constant threat of famine. And later, the introduction of sheep into New South Wales for the production of fine wool, gave the colony an expanding industry, and encouraged freed convicts (“emancipists”) and legal immigrants to settle and take up sheep, cattle or arable farming in the open plains beyond the Blue Mountains.

xxxxxNor were all the fringes of this vast continent developed simply for the convenience of “transportation”. By the 1830s, convicts who had served their time on Van Diemen’s Land were crossing onto the mainland. Here they founded the free settlement of Victoria - made into a separate colony in 1851 - , whilst further west the colony of South Australia, eventually made economically viable by the introduction of wheat, was created by the selling of land. Meanwhile, in the extreme far west the colony of Western Australia was established by legal immigrants in 1829, centred on today’s city of Perth on the Swan River. Furthermore, by 1844, following protests from the growing number of settlers, no more convicts were sent to New South Wales. However Van Diemen’s Land continued to be used until 1852, and by that time it was estimated that some 150,000 prisoners had been transported to the two colonies.

xxxxxBut, as noted, these colonies, strung out as they were around the coasts of this huge continent, were but “fringe” development. The vast interior was known to its inhabitants, the Aboriginals, but had yet to be discovered by the country’s new, European settlers. As we shall see, exploration was to begin in earnest around 1840, at the beginning of the Victorian age (Va), a period which was also to witness the discovery of gold in a number of areas.

xxxxxIncidentally, the British settler and administrator David Collins (1756-1810) wrote the first history of Australia. Entitled An Account of the English Colony in New South Wales, it was first published in 1798. Later, William Charles Wentworth (1790-1872), the man who led a party across the Blue Mountains, and later worked for home rule, produced the first newspaper, the Australian, and wrote A Description of New South Wales in 1817. ……

xxxxx…… As we shall see, Captain William Bligh, the man faced with the Mutiny on the Bounty in 1789, served as governor of New South Wales from 1806, and found himself with another mutiny on his hands, this time among the colony’s marine corps. In 1808 his name was cleared, but he did not c 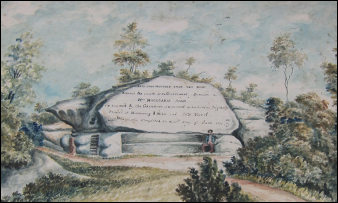 ontinue as the governor. ……

xxxxx…… Thexfollowing year he was replaced by a much abler man, Lachlan Macquarie (1762-1824). Unfortunately, so we are told, his wife was dreadfully homesick, and would often sit alongside Sydney harbour, gazing out to sea. Today there is a stone seat - “Mrs Macquarie’s chair” - to mark the place where she used to sit and watch the ships departing for home. ……

xxxxx…… Such was the crime rate in Britain at this time - particularly in the cities - that transportation was introduced to relieve overcrowding in the prisons. Although often reserved for the political agitator or the hardened criminal, it was sometimes used for the most trivial offence. On the stone bridge which crosses the River Stour in the market town of Blandford Forum, Dorset, for example, there is a notice to this day which reads: Any person wilfully injuring any part of this County Bridge will be guilty of felony and upon conviction liable to be transported for life. ……

xxxxx…… The last shipment of British convicts landed in Australia in 1867.

xxxxxThe French explorer Jean La Pérouse (1741-c1788) visited Botany Bay in 1788, but, following his departure in March, his two vessels were never seen again. In 1826 wreckage of the ships was found off the present-day Solomon Islands, and there was talk of a massacre of some 30 crewmen. Earlier, his exploration of the Pacific Ocean, begun in 1785, had taken him as far north as the Alaskan coast. Then, crossing westward by way of the Hawaiian Islands, Macao and the Philippines, he had became one of the first Europeans to enter Korean and Japanese waters. Here he discovered the strait - later named after him - between the islands of Sakhalin and Hokkaido. Before tragedy struck, he sent notes of his travels back to France by an overland route, and these were published under the title A Voyage Around the World. 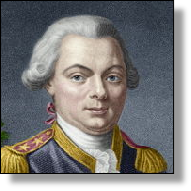 xxxxxIt was also in the year 1788 that the French explorer and naval officer Jean La Pérouse (1741-c1788) visited Botany Bay. On his departure in March of that year, his two vessels and their crews were never seen again, and it was not until 1826 that the wreckage of the two ships was found off Vanikoro Island (now part of the Solomon group). Later it was learnt from the islanders that 30 crewmen had been massacred there. The fate of the other seamen remains a mystery.

xxxxxLa Pérouse served in the French navy for close on 30 years, and in 1785 was put in command of an expedition to explore the Pacific Ocean and find a Northwest Passage from the Pacific side. He took his two ships, L'Astrolabe and La Boussole, as far north as the Alaskan coast and then, after stopping at the Hawaiian Islands, Macao and the Philippines, became one of the first Europeans to enter Korean 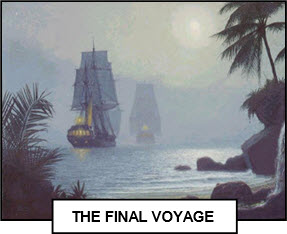 and Japanese waters. It was here that he discovered the strait - later named after him - that divides the islands of Sakhalin and Hokkaido. He then landed on the Siberian peninsula of Kamchatka, and sent a party of men overland to take the journal and maps of his travels back to France. It was after this that he made his visit to Botany Bay, travelling via the Samoan Islands - where a party of his men were murdered - and the islands of Tonga and Norfolk. In the meantime, the record of his extensive exploration in the Pacific reached France safely, and was published in 1797 under the title A Voyage Around the World.

xxxxxAmongxother explorers in Australian waters at this time was Bruni d’Entrecasteaux (1737-1793), one of the French navigators who went in search of La Pérouse. He surveyed the west and south coasts of the continent in the early 1790s, together with parts of the Tasmanian coastline.

In 1798, the English explorers George Bass (1771-1803) and Matthew Flinders (of later fame) circumnavigated Tasmania (then Van Diemen’s Land), finally proving that it was an island. Bass, whose name was later given to the strait between Tasmania and the mainland, joined the navy after practising as a surgeon. Earlier, together with Flinders, he had explored the coast of New South Wales south of Port Jackson, including Botany Bay. Having a keen interest in plant and animal life, on returning to England in 1799, his notes and collections of specimens earned him membership of the London Linnean Society. 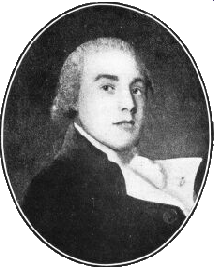 xxxxxIt was two Englishmen from Lincolnshire, the navigator George Bass (1771-1803) and the naval officer Matthew Flinders (of later fame) who circumnavigated Tasmania in 1798 (then called Van Diemen’s Land) and proved once and for all that it was an island. 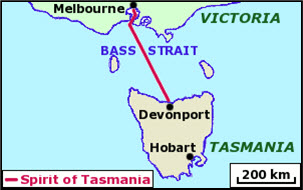 xxxxxBass, whose name was later given to the strait between Tasmania and the mainland, started his career as a surgeon, but later joined the navy and proved a good seaman. It was while serving on the Reliance that he became friendly with the mate, Matthew Flinders, and in 1795 they explored the coast of New South Wales south of Port Jackson, including George’s River and Botany Bay. Bass also possessed a keen interest in animal and plant life. On his return to England in 1799, the year after his successful circumnavigation of Tasmania, he was elected to the Linnean Society of London on the strength of his collection of specimens and the notes he had made on the swan, the albatross and, more particularly, the Australian wombat. He later became a trader, and was lost at sea in 1803 whilst on a journey from Sydney to South America. 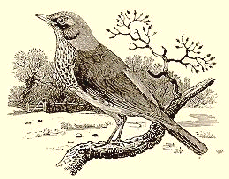 xxxxxIncidentally, a couple of years before Bass returned to England with his bird and animal specimens, a book entitled British Land Birds was published. It was remarkable above all for the superb illustrations it contained, provided by the English bird watcher and amateur naturalist Thomas Bewick (1753-1828), and based on his own water colour paintings from nature. A printer by trade and known for his pioneer work in the art of wood engraving, he later provided illustrations for British Water Birds, produced in 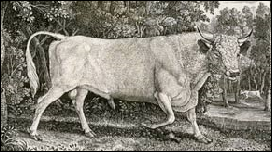 1804. In recognition of his work, a distinctive breed of swan was named after him in 1830. Apart from birds, he also illustrated an earlier work, A General History of Quadrupeds, published in 1790. His wood engraving The Chillingham Bull (illustrated), produced in 1789, is a fine example of his skill, taken from the herd of wild cattle in Chillingham Park, Northumberland, a breed which is thought to go back to ancient times.