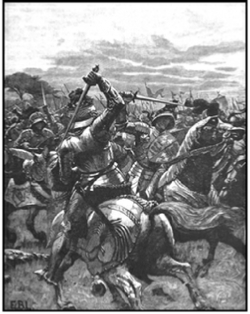 aaaaThe Battle of Bosworth Field, the shortest battle in English history, established the Tudor dynasty on the English throne. Henry, Earl of Richmond, landed at Milford Haven, South Wales, in August 1485 and, quickly gaining support, advanced into England. Richard hastened to meet him, and the two armies fought the last major battle of the Wars of the Roses on high ground just outside the town of Market Bosworth, some twelve miles west of Leicester.

At the commencement of the battle the Yorkists had the advantage. They were superior in numbers to the Lancastrians, and they held a commanding position on Ambien Hill. However, when the fighting began, two of the king's nobles pulled their contingents out of the battle, and one, led by Lord Stanley, actually turned his forces against the king's army. Now outnumbered and thrown into confusion, the Yorkists fled the field. It is said that Richard bravely stood his ground, was knocked from his horse, and beaten to death. He was the first English king since Harold to die in battle on an English field, and the last monarch to do so. Legend has it that the crown fell from his head and rolled into a thicket. It was found, and Lord Stanley placed it on the head of the victorious Henry. 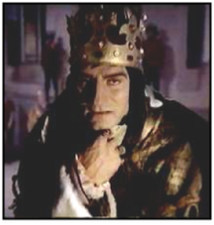 Incidentally, the battle is described by William Shakespeare in his Richard III. His portrayal of the king is something of a character assassination, to say the least, and made the more sinister by his depicting Richard as a somewhat grotesque hunchback. There is no evidence to support such a deformity, in portrait or in writing, though it is believed that he had one shoulder higher than the other. As to his assessment of the king's character, this certainly heightened the dramatic effect and, perhaps more to the point, pleased his Tudor masters. Even so, for the times in which it was written, it must surely be seen as an intemperate judgement. ……

…… The standard bearer to Henry Tudor at the battle was one Robert Harcourt. He was knighted in 1497, and when he died in 1509 he was buried in the family church of Stanton Harcourt in Oxfordshire. We are told that the very standard he carried on the day hangs above his tomb. He is said to have waved it over the dead body of Richard III at the end of the battle. ……

…… It is known that after the Battle of Bosworth Richard III’s body was put on display in Leicester and then buried in a Franciscan Friary in the city. The Friary was destroyed during the dissolution of the monasteries - during the reign of Henry VIII - and the king’s exact burial site was lost in time. However, in September 2012 a team of archaeologists from Leicester University, digging below a council car park, discovered the remains of a church and - believe it or not - a skeleton which, on examination, proved to be that of King Richard III! The bones were interred in Leicester cathedral.

xxxxxIn 1485 the armies of Richard III and Henry Tudor fought out the last battle of the Wars of the Roses, just outside Market Bosworth, near Leicester. The Yorkists had a larger force and held the high ground, but when the fighting began two of the king's nobles pulled their forces out of the battle, and the Yorkists were driven off the field. Richard was knocked from his horse and killed. Henry Tudor was king of England.