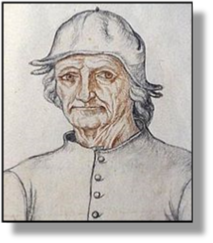 was the early Dutch painter who literally conjured up hell on earth. His weird and tortured figures depict a cruel and sinful world, tormented by demons and evil spirits, and damned to everlasting torment. The most fantastic of these disturbing visions is to be seen in his Hell, one of the panels from his masterpiece, the three-part altarpiece entitled The Garden of Earthly Delights. This triptych was completed about 1500 and is now in the Prado, Madrid. Like all his surrealistic work, it attracts and fascinates by the very monstrosity of its figures, its fantastic landscapes, and the rich colours used to heighten the overall effect.

xxxxxThe major theme of the Garden of Earthly Delights (detail illustrated below), unlike some of his highly imaginative work, is not difficult to understand, though some of the imagery employed might be open to different interpretations. It traces the history of mankind, from the original sin of Adam and Eve to the nightmare of Hell which awaits the damned. The inviting garden in the central panel, full of birds, fruit and dancing nudes, depicts the earthly delights which lure man to eternal torment.

xxxxxThe early Dutch painter Hieronymus Bosch depicted a cruel and sinful world, his paintings being full of demons, tortured figures and lurid landscapes. Notable is his Hell, part of his altarpiece The Garden of Earthly Delights completed around 1500. This traces the history of mankind from original sin to the eternal torment which awaits those who succumb to earthly pleasures. Earlier works included The Marriage of Cana and Seven Deadly Sins, but his characteristic pessimism and moral rectitude are best seen in The Ship of Fools and The Haywain. Philip II of Spain admired his paintings, and for a time, as we shall see, the Flemish artist Pieter Brueghel the Elder (1566 L1) was influenced by his work.

xxxxxBosch was born at Hertogenbosch in North Brabant, close to today's border with Belgium, and he took his name from his place of birth. He is thought to have been an orthodox Catholic, but his pessimistic vision of the world and his moral rectitude may possibly have been the result of his association with the local religious group known as the Brotherhood of Our Lady. Much of his work is symbolic and, using medieval concepts, satirises human folly, as seen in his The Ship of Fools and his The Haywain (illustrated above). The latter work, based on a Flemish proverb, depicts man, ever in pursuit of pleasure and material gain, grabbing greedily at the hay, the fruit of the earth. Even in his images of Christ and his saints, the demons and sneering humans make their presence known.

xxxxxAmong his early works are Marriage at 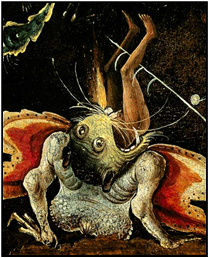 Cana, Seven Deadly Sins and Ecce Homo. Some of these take as their theme the temptation of evil and man's preoccupation with self-gratification, but there is little recourse to symbolism, and his drawing, brushwork and composition have yet to reach the brilliance and originality shown in his vast three-part altarpieces. His work was popular in his own lifetime and this ensured his prosperity. Among those who admired his paintings were Philip II of Spain - who was something of a pessimist himself - and Philip the Fair of Burgundy, for whom he painted a Last Judgement in 1504 (detail illustrated). Some 40 paintings are attributed to Bosch, but only seven of these were signed, and none was dated.

xxxxxFor a while, the Flemish artist Pieter Brueghel the Elder was strongly influenced by Bosch's work. He made variations of several of his paintings and, at times, closely imitated his style, but, as we shall see in 1566 (L1), his work then developed beyond mere imitation, and took a unique path of its own. 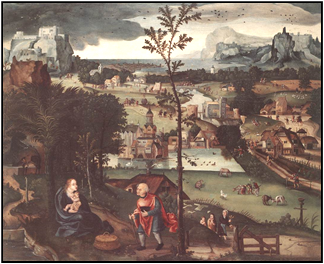 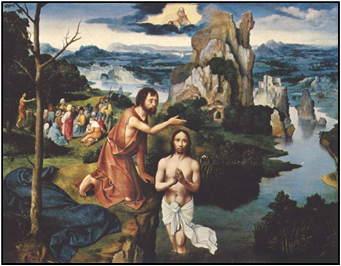 Joachim Patinir (c1475-1524) may well have studied under Bosch. His works are religiously inspired, but the subject matter, as in his Rest on the Flight to Egypt (illustrated left) and his painting of St. Jerome, is over- whelmed and almost lost in a vast landscape. There are no grotesque figures, but the landscape itself is melancholic in mood, particularly in the case of his Crossing the Styx, and his Baptism of Christ (illustrated right). Regarded as the first western artist to specialise in landscape painting, his paintings, like those of Bosch, also had an influence - a more lasting influence in fact - on the work of Pieter Brueghel the Elder. 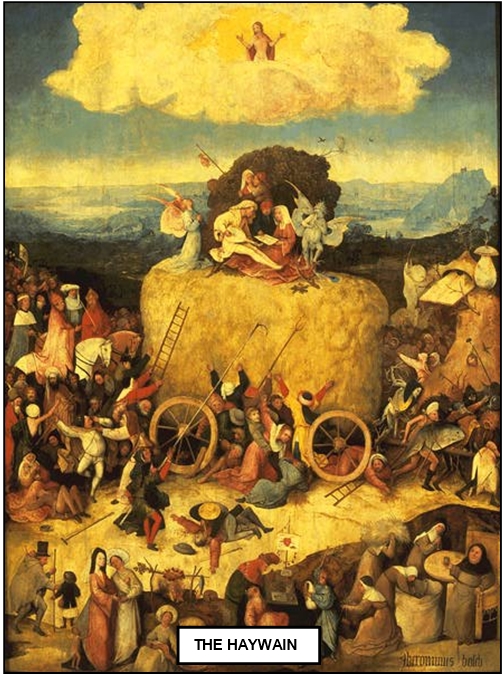 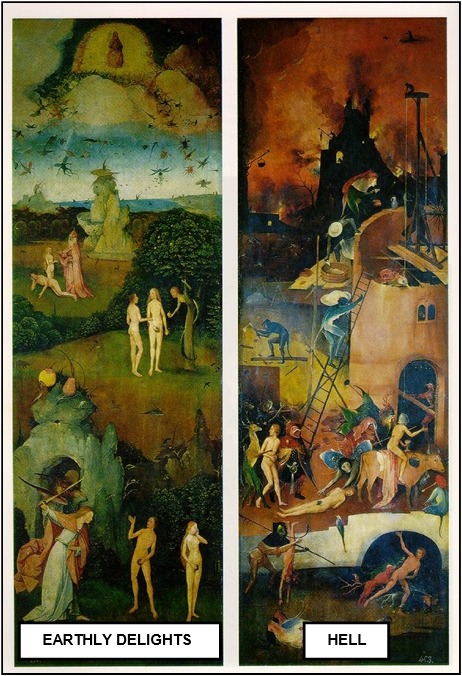