xxxxxMembers of the Borgia family were descendants of a noble line, originating from Valencia in Spain. Alfonso Borgia established the family in Italy in the early part of the fifteenth century and, playing a prominent part in church and political affairs, was elected Pope as Calixtus III in 1455. Such was his power and influence that his nephew, Rodrigo, was also elected to this office in 1492, taking the title Alexander VI. 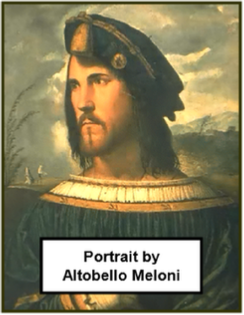 of the most prominent and most notorious members of the family was Rodrigo’s illegitimate son Cesare Borgia, a name which, with some justification, has become associated with ruthlessness, cunning and intrigue. After a misspent youth, during which he studied canon and civil law at Pisa University, he entered the church - as was then expected of the second son - and quickly joined the hierarchy, becoming bishop of Pamplona in 1491. With the election of his father as Pope Alexander VI promotion became even more rapid! He was at once appointed Archbishop of Valencia, and then in 1493, at the age of 18, was made a cardinal.

xxxxxBut Cesare was not content with ecclesiastical life, as debauched and remunerative as this could be in those days. Arrogant and ambitious, he now turned soldier and politician. He served the King of France, Louis XII, for a short time, gaining the title of the Duke of Valentinois (hence his nickname Il Valentino) and then, under the guise of assisting his father to re-establish papal control in Romagna, he proceeded to cut out for himself a sizeable piece of real estate in central and northern Italy. His ill-gotten gains as the “captain-general” of the papal armies included the Romagna region itself, the principality of Piombino, and Camerino and Urbino, all in central Italy.

xxxxxIt was during this period, above all, that he gained his reputation for being the most cunning, ruthless and treacherous of the petty leaders (“Princes”) of the Italian Renaissance, prone to fits of violent temper and totally unpredictable. As early as 1497 he was suspected of murdering his brother, Juan. This was never proven, but in 1500 he was clearly responsible for the killing of the Duke of Bisceglie, second husband to his sister Lucrezia. Two years later, when he faced a rebellion during his campaign in central Italy, he lured his principal opponents to peace talks at the castle of Sinigaglia and then promptly executed them.

in fact, during this time that the political philosopher Machiavelli (illustrated), acting as one of the Florentine ambassadors attached to Cesare’s camp, was able to observe at first hand the character of the man he was to dub his “Prince”. Furthermore, he was a witness to the treachery and killings at Sinigaglia castle and later wrote his famous account of the incident entitled, On the Manner Adopted by the Duke Valentino to Kill Vitellozzo.

xxxxxWith the death of his father in 1503 Cesare’s fortunes went into free-fall. The new pope, Julius II, was openly hostile towards his escapades, and within a short while he had lost all his land and was forced to take refuge in Naples, then in Spanish hands. Here he ran into more trouble. Accused of planning to overthrow the pope, he was taken to Spain and imprisoned in the castle of Medina del Campo. He managed to escape after a couple of years, but, after joining his brother-in-law, the King of Navarre, he was killed during an expedition against Castile in 1507.

xxxxxCesare was by no means a first-rate soldier and, despite his colourful reputation, was probably little worse than many of his contemporary firebrands who were trying to take advantage of the chaotic conditions within Italy at this time. However, he was undoubtedly a cunning and ruthless manipulator, adept at political intrigue and, above all, single-minded in purpose, and, as we shall see (1513 H8), it was these qualities above all which Machiavelli was to see as the essential virtues required of a modern ruler.

xxxxxIncidentally, for almost a year Cesare Borgia had in his employ the young Leonardo da Vinci. In 1502, clearly anxious to live life to the full, this master-of-all trades joined the staff of this notorious leader, working as his “senior military architect and general engineer”. As such he travelled around the captain-general's territories, making plans of the cities and sketching the lie of the land. He is likely to have met Machiavelli at this time.

xxxxxAlfonso Borgia established the noble Borgia family in Italy early in the 15th century, and was made pope as Calixtus III in 1455. By his influence, his nephew Rodrigo was also made pope as Alexander VI in 1492. Rodrigo's illegitimate son, Cesare Borgia, known for his ruthlessness and cunning, was appointed a Cardinal in 1493, at the age of 18, and then, in the guise of helping his father, intrigued and murdered to gain control of a vast area of central and northern Italy. It was at this time that the political philosopher Machiavelli, attached to Cesare's camp, observed at first hand the man he was to dub his "Prince" (1513 H8). With the death of his father, Cesare fell from favour and fled to Naples. Imprisoned for planning to overthrow the new pope, he escaped, but was killed in 1507 during an expedition against Castile.

xxxxxCesare’s sister, Lucrezia Borgia (1480-1519) may have been actively associated with murder and depravity, but she was more likely to have been used by her family in order to extend their wealth and influence via a series of marriages. After the death of her father, Pope Alexander VI, she put aside politics and set up a brilliant court in the city of Ferrara. This became a centre of Renaissance culture, and came to include the Italian poet Ludovico Ariosto and the two brilliant Venetian painters Giovanni Bellini and Titian. 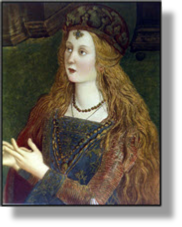 xxxxxThe third marriage, to Alfonso I, Duke of Ferrara, was arranged in 1501 to consolidate her brother’s hold on the Romagna, but it proved valuable in another direction. Following the death of her father, Pope Alexander VI, in 1503, she ceased to play a part in politics, and from 1505 devoted her time to setting up a brilliant court in the city of Ferrara. Under her guidance and assisted by her husband, this became a centre of Renaissance art and letters, and included the Italian poet Ludovico Ariosto (noted for his epic poem Orlando Furioso) and the two outstanding Venetian painters Giovanni Bellini and Titian.