xxxxxAs we have seen (1810 G3c), by 1818 the Spanish colonies in the southern region of South America - Argentina, Paraguay and Chile - had gained their independence, mainly due to the efforts of Belgrano, San Martin and O’Higgins. In the north it was Simon Bolivar, “The Liberator”, who was the outstanding revolutionary leader. He encountered much difficulty in trying to liberate his homeland, Venezuela, but in 1819 he led a daring attack upon Spanish forces in New Granada (Colombia) and, by the Battle of Boyaca, gained that country’s independence. On the strength of this victory, he liberated Venezuela by the Battle of Carabobo in 1821, and his chief-of-staff defeated the Spaniards in Ecuador the following year. By then only Peru remained in colonial hands, and this country was liberated - again with the help of his chief-of-staff - in 1824, the decisive battle being fought at Ayachucho. Upper Peru surrendered a year later, and was named Bolivia in Bolivar’s honour. By 1830, however, war had broken out between a number of the new states, and Bolivar, disliked as a dictator, was forced to resign. He died later that year. Uruguay, controlled for a time by Brazil, gained independence in 1828, and Brazil itself, the only Portuguese colony, became an independent monarchy in 1822. Bolivar had hoped for a union of all the Spanish states, but rivalry kept them apart, and all fell under military or political dictatorships. In 1865 (Vb), as we shall see, a border dispute broke out between Paraguay and its neighbours. Nor did the states in Central America fare any better. All had gained independence by 1822, but a union formed a year later collapsed in 1838, and in each state a constant struggle continued between conservative and liberal elements.

xxxxxAs we have seen (1810 G3c), by 1818 the Spanish colonies in the southern area of South America - Argentina, Paraguay and Chile - had gained their independence, due in the main to freedom fighters like Belgrano, San Martin, Francia and O’Higgins. Further north, it was to be the revolutionary leader Simon Bolivar, known as “The Liberator”, who was to be the champion of freedom. He fully deserved the title. He spent much of his life fighting the Spanish colonial forces, and eventually succeeded in liberating not only Venezuela, his homeland, but also Colombia, Ecuador, Peru and Bolivia, a new state named in his honour - a total of one and a half million square miles of territory. But his vision of a united Spanish America never materialised, and his rule as a dictator made him enemies and led to his downfall in 1830. 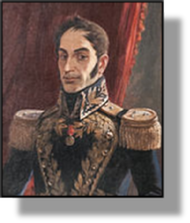 xxxxxBolivar was born into a wealthy family in Caracas, Venezuela. After private tuition he was sent to Europe at the age of 16, and spent three years in Spain. In 1801 he married and returned to Caracas but, following his wife’s sudden death from fever, he returned to Europe in 1804. It was then, while studying in Paris, that he read the works of such political philosophers as Locke, Hobbes, Voltaire and Rousseau. Perhaps not surprisingly, he returned to Venezuela in 1807 determined to liberate his country from Spanish rule.

xxxxxHe did not have long to wait. With the fall of the Spanish monarchy in 1810 the fight for independence in Venezuela began in earnest. A republic was declared in July 1811, and when its military dictator Francisco de Miranda was captured by the Spanish the following year, Bolivar quickly emerged as the champion of liberty and the new revolutionary leader. In a series of hard-fought battles he defeated the royalist forces and seized control of the capital Caracas in August 1813, but his rule as “liberator” was short lived. The Spanish counter-attacked and retook the city, and he only just managed to escape. He eventually reached Jamaica, and it was here that he published his “Letter from Jamaica”, setting out his idea of a vast union of constitutional republics throughout Spanish America, led by a president chosen for life (with doubtless himself in mind!). It was to be little more than a pipe dream, but it played a useful part in galvanising the fight for independence.

xxxxxOn returning to Venezuela, he established his headquarters at Angostura in the Orinoco region, a fairly remote and safe area. There he continued the fight, assisted with money and weapons from the little republic of Haiti. However, making little real progress, in the spring of 1819 he decided to make a surprise attack upon the Spanish viceroyalty of New Granada (today’s Colombia). Itxwas a stroke of genius, and proved the turning point in the struggle for independence. In a feat of endurance which has gone down in the annals of military history, he led a force of no more than 2,500 men across flooded lowlands and treacherous mountain passes, and, by so doing, caught the Spaniards completely off their guard. At the Battle of Boyaca in August 1819 they were routed and forced to surrender. Three days later Bolivar entered the capital of Bogota. 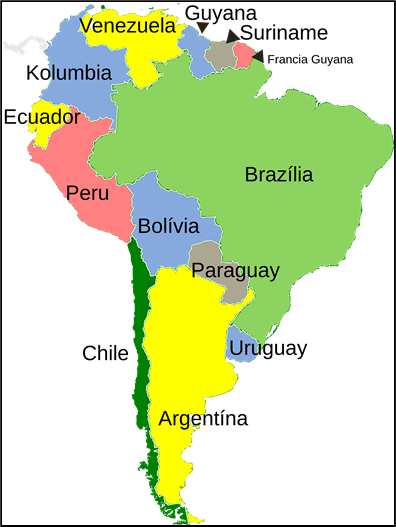 xxxxxOnxthe strength of this stunning victory Bolivar took the fight into his homeland, Venezuela. At the Battle of Carabobo in June 1821 he inflicted another defeat on the royalist forces, and once again entered Caracas in triumph, but this time with victory assured. Having achieved his paramount aim - the independence of Venezuela - he then turned his attention to Ecuador. Whilstxhe took on the Spanish force defending Quito, his brilliant chief of staff, Antonio José de Sucre (1795-1830) marched into the interior and in May 1822 won a resounding victory over the royalists near the Andean volcano of Cerro Pichincha. The Spaniards capitulated, by now fully aware that their days of empire were fast coming to an end. Once fully liberated, Ecuador was joined to Gran Colombia, a republic which had been conceived earlier, already included Venezuela, and had Bolivar as its president.

xxxxxNow only Peru remained in Spanish hands. There, the revolutionary leader José de San Martin, who, as we have seen earlier (1810 G3c), had played a major part in the liberation of Argentina and Chile, was already in possession of Lima. In September 1820 he had landed on the Peruvian coast with 6000 men, defeated a Spanish army at Pisco in the December, and then occupied the capital. From here he proclaimed Peru’s independence in July 1821, and was appointed the country’s protector. However, the Spanish, retreating into the mountains, remained a considerable threat, and Bolivar’s army was clearly needed if the country were to be liberated. In July 1822, the two men, San Martin and Bolivar, met at the port of Guayaquil in Ecuador to discuss tactics and the political future of the new independent states, but there was no meeting of minds. San Martin had no sympathy with the authoritarian attitude adopted by Bolivar and, on leaving Guayaquil, went into exile, living the remainder of his life in Europe. 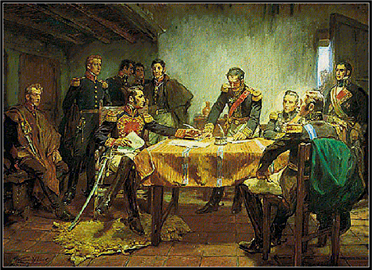 xxxxxIt was left to Bolivar to take on the Spaniards and complete the liberation of Latin America. This he did, showing consummate military skill. On arrival at Lima in September 1823 he assembled an army to flush the Spanish out of the mountains. Havingxwon the major battle at Junin, high in the Cordilleras, a further victory was achieved by Sucre at the Battle of Ayachucho in December 1824. Here the Spanish viceroy surrendered his entire army. (illustrated). The final campaign ended with the liberation of Upper Peru in January 1825 and, later that year, this region became known as Bolivia in honour of its liberator.

xxxxxBolivar was now at the height of his power, president of both Gran Colombia and Bolivia. But his dictatorial measures won him few friends, and his obsessive idea of a league made up of the former Spanish colonies, convened in 1826, met with limited success. In that year war broke out across much of the region. Venezuela and Ecuador succeeded from the republic of Gran Colombia, and Peru attempted to seize land from Ecuador. Early in 1830 Bolivar, unable to pacify the rival factions, resigned as president-cum-dictator of Gran Colombia. By then the knives were out, and he had survived two assassination attempts. He left Bogota in May, and eventually settled on his estate near Santa Marta. He died of tuberculosis later that year, an embittered man.

xxxxxThe last Spanish colony in South America to obtain its independence was Uruguay. Choosing to fight its own battles back in 1810, it fell under the control of its neighbour Brazil in 1821, and did not become a sovereign state until 1828. Brazil itself, the one Portuguese colony on the continent, was granted independence by Dom Pedro, son of King John VI, in October 1822. However, the country retained a monarchy - the first being Dom Pedro himself - and a republic was not formed until 1889.

xxxxxAlthough revered today as South America’s greatest liberator - his birthday is a national holiday - dictator Bolivar ended his days hated and disillusioned. His optimistic idea of a union of former Spanish colonies came to nothing. The very vastness of the project, plus the regional rivalries and the ambitions of its various leaders, saw to that. And within a few years the political freedom that had been won was lost, stifled under military dictatorship or the power of the church and a few wealthy families. And, as we shall see, boundary disputes led to open warfare, as in 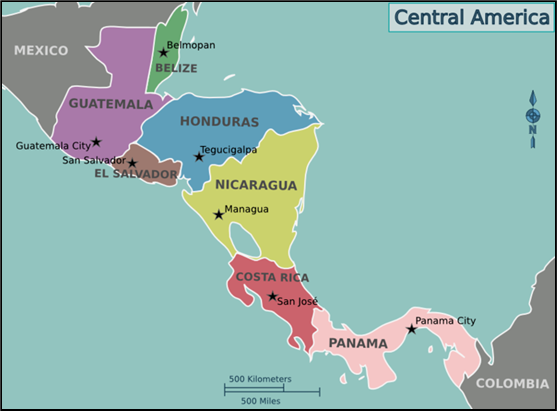 1865 (Vb), when Paraguay waged war against the combined forces of Argentina, Brazil and Uruguay. And other conflicts followed.

xxxxxNor was the situation any better in Central America. Here, independence from Spanish rule was achieved in 1821 and two years later the United Provinces of Central America was formed, made up of Guatemala, El Salvador, Honduras, Nicaragua, and Costa Rica (Panama remained part of Colombia). This broke up, however, in 1838, and in each state there followed a power struggle between the conservatives - supporters of the Roman Catholic Church - and the liberals seeking political reform.

xxxxxIncidentally, we are told that when Bolivar was studying in Europe as a young man he visited Rome and, standing on the heights of the Monte Sacro, swore an oath that he would not allow his arm to rest nor his soul to die until he had liberated South America from Spanish dominion. He was true to his word. …… 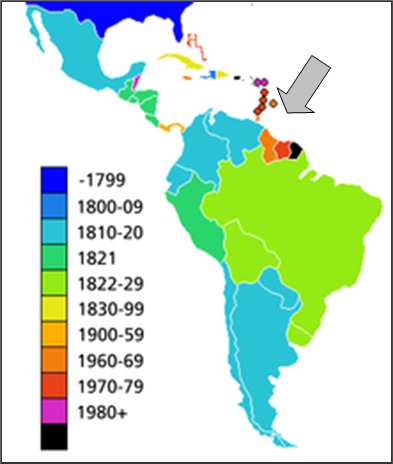 xxxxx…… The name Peru is thought to derive from a native Indian word meaning “land of abundance” - as it proved to be. However, another theory is that it is a corruption of Viru, the name of a river. ……

xxxxx…… As we have seen, it was this struggle for independence from Spain and Portugal, and the fear that other reactionary countries in Europe might intervene to help maintain these colonial possessions, which triggered off the Monroe Doctrine in 1823. ……

Including independence for: New Granada,