xxxxxIn 1704, a French army combined with a Bavarian force and marched towards Vienna, but they were intercepted by the British, commanded by the Duke of Marlborough, and the Austrians, led by Prince Eugene of Savoy. The French, having fortified a village called Blenheim, stretched their army along a ridge some 3 miles long. Eugene advanced on the enemy’s left flank while Marlborough launched a direct attack upon Blenheim. This proved unsuccessful, but in order to strengthen their hold on the village the French then withdrew men from the centre of their line. Marlborough seized his chance and, leading a massive force of infantry and cavalry across a stretch of marshland, smashed through the centre of the weakened French line, and then overran the village. The French retreated in disorder. Meanwhile Eugene had broken through the east flank and put the Bavarians to flight. For the French it was their first major defeat for some 50 years, and it proved a psychological setback from which they never really recovered. For the Allies, it saved Vienna, virtually knocked Bavaria out of the war, and provided a vital boost to their confidence.

THE WAR OF THE SPANISH SUCCESSION

The Duke of Marlborough 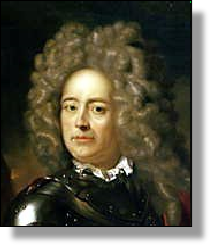 xxxxxIn the opening phase of the War of the Spanish Succession, the French - very much in the driving seat - drew up an audacious plan to capture Vienna and, hopefully, bring a swift end to the conflict. In 1704 they sent an army to unite with the Bavarians, and the combined force then marched down the Danube valley towards the Austrian capital. Their advance was intercepted, however, by an army made up of the British, under the command of the Duke of Marlborough (illustrated) - who had marched his men swiftly from Holland - and the Austrians led by Prince Eugene of Savoy. The opposing armies met on the left bank of the Danube, about eighteen miles north-west of Augsburg at the Bavarian village of Blenheim (now known as Blindheim). 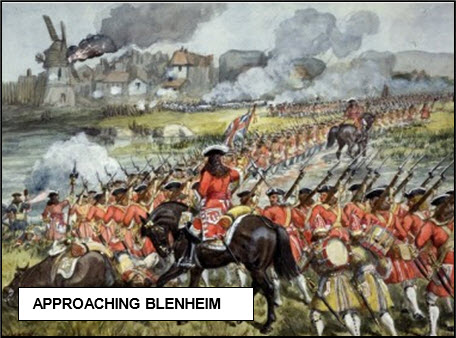 xxxxxThe French, having been forewarned of the enemy's approach, fortified the village and extended their line along a ridge some three miles long, and fronted by an area of marshy ground on either side of a small stream called Nebelbach. In order to gain some element of surprise, the Allies advanced overnight and attacked about noon the following day. Eugene advanced on the enemy's left flank, held by the Bavarians, and Marlborough made a direct assault upon Blenheim itself. This proved unsuccessful, but it had the effect of drawing enemy infantry away from the centre of the French line in order to strengthen the defences of the village. This gave Marlborough the opportunity he had planned for. He then led a massive force of cavalry and infantry across the Nebelbach and its surrounding marshland - the foot soldiers wading waist-high in places - and penetrated straight through the centre of the French line. Having breached the enemy's defences, the garrison at Blenheim was at his mercy. Many of its members were captured, many were killed, and many were drowned in the River Danube. Meanwhile, Eugene had broken through the left flank and, circling behind the front line, had cut the Bavarians off from their allies and forced them to retreat. The battle was over.

xxxxxThe Allies suffered about 12,000 casualties, killed and wounded, the French and Bavarians possibly twice that number. Among the 13,000 or so men captured was the French commander himself, Marshal Camille, Count de Tallart. The Battle of Blenheim can be seen as a turning point. Although the war had only just begun in earnest, and had eight more years to run, this was the first major defeat suffered by the French army in over fifty years, and, as such, it was a serious, psychological setback from which they never really recovered. For the Allies, it saved the city of Vienna, instilled the alliance with a great deal of confidence, and virtually knocked Bavaria out of the war. For John Churchill, Duke of Marlborough, it was his most famous victory, and a grateful nation gave him a small gift - Blenheim Palace!

xxxxxIncidentally, in August 1704 members of the government approached the English essayist and poet Joseph Addison and asked him to write a poem to celebrate the great victory of Blenheim. Later that year he published The Campaign, a poem addressed to Marlborough and praising his military genius. It was an immediate success, and launched Addison on his literary and political career.

xxxxxJohn Churchill, Duke of Marlborough (1650-1722), joined the foot guards at 17, and served under the Duke of York, later James II. He was second-in-command of the royalist forces during the Monmouth Rebellion but, fearing that Roman Catholicism might well became the state religion, in 1688 he threw in his lot with William of Orange and contributed to the Glorious Revolution. This earned him an earldom, but in the 1690s he was imprisoned for a time for communicating with the deposed James II, and he did not regain royal favour until Queen Anne came to the throne in 1702. For the next nine years, however, he was showered with honours for his series of brilliant victories, including those gained at the battles of Blenheim, Ramillies, Oudenaarde and Malplaquet. He received a dukedom and the gift of Blenheim Palace for his services to the nation. But all this changed in 1711 when his wife fell out with the Queen. He was falsely accused of embezzling public funds, and stripped of all his offices and his military rank. One of his greatest critics was the writer Jonathan Swift. His Conduct of the Allies accused him and the Whigs in general of prolonging the war to line their own pockets. Marlborough escaped to Holland, and had to stay there until the accession of George I. He then returned and had his military rank restored, but by then he was a sick man and spent his last years in retirement.

xxxxxJohn Churchill, Duke of Marlborough (1650-1722), one of England's greatest generals, was born in Ashe, Devon, son of Sir Winston Churchill, a member of parliament. He joined the foot guards at the age of 17, and served on the continent under the Duke of York - later James II. He was a colonel by 1682, and three years later was second-in-command of the king's forces during the overthrow of the Monmouth Rebellion. As the reign of James II continued, however, he feared that Roman Catholicism might well be made the state religion. Thus, when in 1688 he was promoted to lieutenant general with the task of resisting the invasion of the Protestant William of Orange, he deserted his post and contributed in no small measure to the bloodless Glorious Revolution. The following year he was duly rewarded. King William made him a privy councillor and the Earl of Marlborough, and he then fought for his monarch with distinction in both Flanders and Ireland.

xxxxxIn the early 1690s, however, he lost favour at court - and spent a short time in the Tower of London - when it became known that he had been in secret correspondence with the deposed James II, then in exile in France. It was not until Queen Anne succeeded to the throne in 1702 that he regained royal approval. Over the next nine years such approbation knew no bounds.

xxxxxAs commander in chief of the English and Dutch armies during the War of the Spanish Succession, he won a series of brilliant victories over the French, particularly at the battles of Blenheim, Ramillies, Oudenaarde and Malplaquet. He was created 1st Duke of Marlborough in 1702, had honours heaped upon him, and was provided with a vast stately home in Oxfordshire - Blenheim Palace - by a grateful nation.

xxxxxIn 1711, however, all this changed, and he found himself once more out of royal favour following his wife's quarrel with the Queen. He was falsely accused of embezzling public funds, stripped of all his public offices, and removed as commander in chief of the nation's army. The Anglo-Irish satirist Jonathan Swift clearly played a part his downfall. Editor of the Examiner, the official Tory publication, in November he published a pamphlet entitled The Conduct of the Allies, bitterly accusing the Whigs of prolonging the War of the Spanish Succession out of self interest. Marlborough escaped to Holland to avoid charges of corruption, and was obliged to stay there for the remainder of Anne's reign. He returned on the accession of George I, and his military rank was then restored, but, already a sick man, he lived the last years of life in retirement. 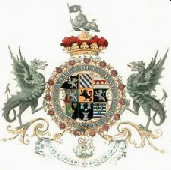 xxxxxMarlborough was an ambitious man, and this doubtless distorted his concept of loyalty at times, but he was an outstanding tactician on the battlefield, making highly effective use of mobility and firepower, and bringing maximum force to bear where penetration was the most likely to succeed. And he was, too, an astute diplomat, creating and then managing to maintain a broad alliance of nations in a period of conflicting political interests. He remains today one of the greatest figures in British history.

xxxxxIncidentally, a brilliant biography of the 1st Duke, Marlborough, His Life and Times, was written by his ancestor Sir Winston Churchill, British prime minister during the Second World War. ...… 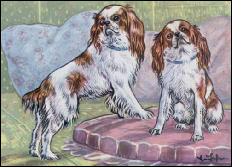 xxxxx...... The Duke of Marlborough provided the name for one of the two principal varieties of the English toy spaniel. The King Charles spaniel - black and tan in colour - was named after Charles II because he was very fond of that particular breed. The Blenheim - white and chestnut red - was so called because Marlborough bred this dog at the beginning of the 18th century and the family later specialised in developing this particular variety.