The Battle of Poitiers

and Massacre of Limoges

xxxxxAs we have seen, Prince Edward, the eldest son of Edward III, won his spurs at the Battle of Crécy in 1346. Ten years later, in 1356, he led the English force that won a resounding victory at the Battle of Poitiers. Here, despite being outnumbered two to one, his troops stood their ground against a number of ferocious attacks by the French. The conflict was eventually decided when Prince Edward sent a force of archers behind the enemy’s lines and took the French by surprise. By nightfall they had lost 3,000 men and their king, John II, had been taken prisoner. Edward returned home in triumph, and then led a successful expedition to Spain, restoring the deposed king of Castile. In the late 1360s, however, he returned to France as Prince of Aquitaine and, faced with a rebellion against his heavy taxes, allowed his troops to commit the Massacre of Limoges in 1370. This savage act of cruelty in which the city’s defendants were put to the sword (estimated at 3,000) put an end to English rule. The Black Prince returned to England a sick and broken man, and died five years later, a year before the death of his father, the king. 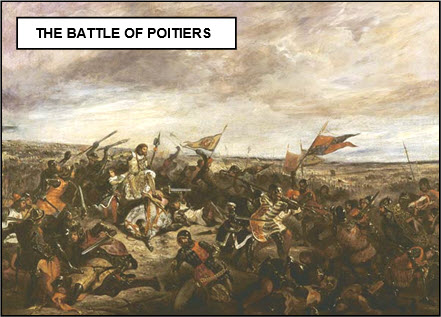 xxxxxPrince Edward, eldest son of Edward III, was born at Woodstock in Oxfordshire in June 1330 and first came into prominence in 1346 when, as we have seen, he accompanied his father to France and took part in the Battle of Crécy. Although only sixteen years of age, he was given command of the right wing of the English army and acquitted himself well.

xxxxxIn 1355, as part of the continuing warfare between England and France, Prince Edward, now popularly known as the Black Prince, landed at Bordeaux. The following year, 1356, he was making his way north with an army of some 8,000 strong, when near to Poitiers he found his way barred by a French army under the command of their king, John II. Negotiations having failed, the French army, numbering about 15,000, launched an attack by dismounted knights. This was repulsed by the English archers, but a second attack was more successful. It was eventually broken up and large numbers were forced to retreat, but a fresh force then launched an all-out assault and the English were hard pressed to maintain their position. It was at this juncture that Prince Edward sent a small force of archers around the flank to attack the French from the rear, and this proved the deciding factor. The French fought well, but by nightfall their army had been defeated. About 3,000 French were killed and their king had been taken prisoner. Prince Edward returned to England in triumph, taking John II with him, his son Philip, and 2,000 French knights. 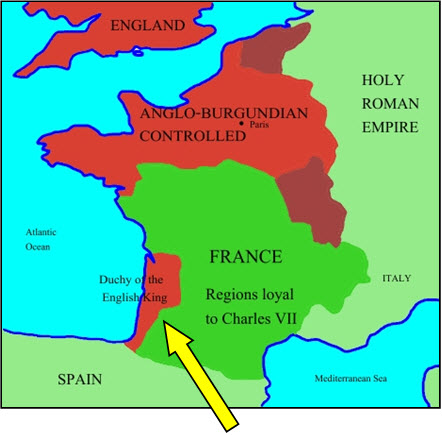 xxxxxIn 1362 he was created Prince of Aquitaine (arrowed on map), and five years later led an army into Spain to restore the deposed king of Castile. His mission was successful following his victory at the battle of Najera, but it was while in Spain that he contracted an illness from which he never recovered and was to be the cause of his death. Having returned to Aquitaine he levied such heavy taxes to pay for his Spanish adventure that the principality burst into rebellion. By mid-1369 some 900 towns and castles had come out against him. It was then that in 1370 his troops committed the Massacre of Limoges, sacking the city and slaughtering all its defendants, estimated at 3,000. It was an act of cruelty which put an end to English rule in Aquitaine. He returned to England a sick man in 1371 and gave up his command of the principality.

xxxxxHe spent his last five years ensuring the succession of his surviving son Richard of Bordeaux, who did in fact become king as Richard II after the death of his grandfather. Prince Edward died at Westminster in June 1376, a year before his father’s death, and was buried in Canterbury Cathedral, where part of his armour is on display.

xxxxxIncidentally, at the Battle of Crécy Prince Edward won not only his spurs but also the famous ostrich plumes together with the motto adopted by him and subsequent Princes of Wales: Homout: ich dene (Courage; I serve), now usually written Ich Dien. The three feathers are said to have been taken from King John of Bohemia, killed in the battle.