xxxxxThe Black Death was a bubonic plague which spread across Europe from about 1347. Over the next four years about one third of Europe’s population perished. The disease was brought from the Far East, transmitted by fleas and carried by rats. Death occurred in two to three days, during which the skin turned a deep purple colour - hence the name given to the epidemic. Suffering and turmoil was on a vast scale - as described in Boccaccio’s Decameron - and hastened the decline of the feudal system. Surviving peasants were no longer tied to the land and could sell their services. Also badly hit were the monasteries, important places of learning at this time. Many were unable to continue. As we shall see, the Peasants’ Revolt of 1381 (R3), over thirty years later, was triggered off by the long-term, economic effects of the Black Death.

xxxxxThe Black Death was a vast epidemic of a bubonic plague that ravaged through Europe, arriving from China via the Middle East in about 1347. Froissart estimated that over the next four years about one third of Europe’s population was killed (some 75 million people) and this is generally accepted as a realistic figure. The source of the epidemic was the bacillus Pasteurella pestis. This was transmitted by fleas and carried to Europe on the black rats which infested ships coming from Asia. 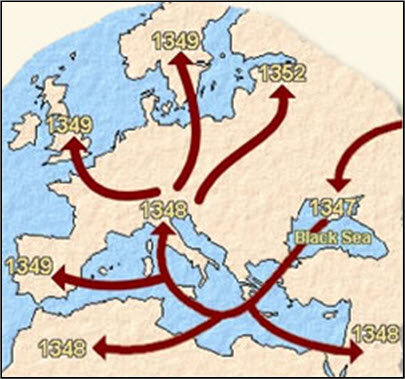 xxxxxThe plague, which was highly contagious, arrived at Weymouth on the south coast of England (then known as Melcombe Regis) in 1348, and quickly spread throughout the whole country. It had done its worst by the winter of the following year, but there were four further outbreaks throughout the remainder of the 14th century, and the plague remained epidemic in England until 1665. The outbreak in Bristol was particularly severe. The city was completely closed off, and it is estimated that nine-tenths of the population perished. It is assessed that by the end of 1349 the population of the British Isles had been reduced by between 20 to 30 per cent.

xxxxxDeath came comparatively quickly, in most cases just two or three days after the appearance of the first symptoms. There was a sudden onset of high fever and vomiting, and then the skin quickly turned a deep purple, due to respiratory failure. This discolouration gave the illness its common name, The Black Death, a term not used, in fact, until the early nineteenth century. There was no remedy as such, save keeping a safe distance away from the body and belongings of anyone infected.

xxxxxThe suffering, misery and desolation caused by this plague were on a vast scale. The whole of Europe was plunged into chaos. Many were convinced that Satan had taken over the control of the world, or that God was wreaking his vengeance on sinful man. Because of the severe shortage of food, bandits, sometimes in large groups, roamed the country stealing whatever food the

y could find, and killing anyone who got in their way. In some places the strange idea was put about that if you had the plague and passed it on to someone else you would no longer be troubled by it yourself! One only needs to read the graphic opening passages of Boccaccio’s Decameron to appreciate the social and moral turmoil into which Europe was plunged. 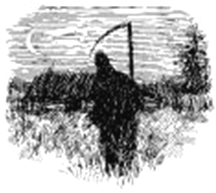 xxxxxThis was the worst natural disaster to befall the western world. Its most important long-term effect was to hasten the decline of the old feudal system. The resulting shortage of labour meant that the peasant was no longer “tied to the land”, but could sell his labour for a wage. Attempts were made to prevent this new-found freedom, such as the Ordinance of Labourers in 1349 and the Statute of Labourers in 1351 - both aimed at pinning down wages and stopping the movement of peasants - but the economic forces on the march were far too powerful for even the sternest of legislation. Devastating, too, was the effect on the monasteries, important places of learning and charity in these times. Many of them lost all their members, their chronicles ending with the telling phrase: magnus mortalitas - many dead.

xxxxxRecovery of normal life was slow in coming. Indeed, as we shall see, in England, the Peasants’ Revolt of 1381 (R2), over thirty years later, can be seen as one of the long term effects of the Black Death, brought about by the social changes which followed in the wake of this tragic disaster. Furthermore, outbreaks of the plague, some of them serious and widespread, returned to haunt Europe and the Mediterranean region well into the 17th century.