xxxxxIt was in 1856 that the engineer Henry Bessemer invented his “pneumatic converter” and introduced the “Bessemer process”. This blasted air through molten pig-iron to remove impurities and, by doing away with the wrought iron stage of manufacture, made steel very much cheaper. This mass production of low-cost, high quality steel gave an enormous boost to the Industrial Revolution, particularly in the construction of armaments, multi-storey buildings, ships and railways. A similar process was also invented at this time by the American engineer William Kelly, and in 1861 the German-born English inventor William Siemens and the French engineer Pierre-Émile Martin produced the open-hearth process of making steel, a method which proved even more economical. A visible sign of these advances in steel production was to be seen in the construction industry. Steel frameworks enabled the construction of higher buildings and, eventually, the modern skyscraper. Meanwhile in Germany, the industrialist Alfred Krupp, having introduced the new methods of production into Europe, began a thriving business in the manufacture of armaments. But the greatest consequence of the Bessemer and open-hearth processes came in the boost it gave to the building of railroads and steamships, first in the western world and then further afield. 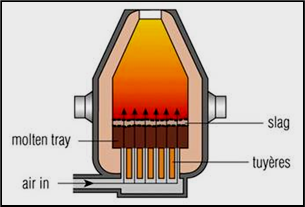 xxxxxIt was during the Crimean War, while engaged in making a new design of cannon, that the English inventor and self-taught engineer Henry Bessemer produced his “pneumatic converter” and, introduced the “Bessemer process”. This method, which blasted air through molten pig-iron to remove impurities, did away with the wrought iron stage of production and, as a result, greatly reduced the cost of steel. Given refinements, the Bessemer process marked the beginning of the Age of Steel in which the mass production of low-cost, high quality steel gave enormous impetus to the Industrial Revolution, notably in the construction of armaments, multi-storey buildings, ships, railways and, later, automobiles. 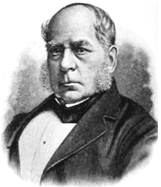 xxxxxHenry Bessemer (1813-1898) was born near Hitchin in Hertfordshire, the son of a typefounder. He first worked in London, where, using his mechanical skills, he produced a number of useful inventions. These included an improved typesetting machine, a movable stamping device, a more durable gold paint, and machinery for use in sugar refining. It was in 1856, while working in Sheffield, that, having turned his attention to metallurgy, he came up with his revolutionary, short-cut process in the manufacture of steel. In 1860 he established his own steel works in Sheffield and made a fortune within a few years, though at that stage his method required pig iron that was low in phosphorus and sulphur. For his services as an inventor he was knighted in 1879 and made a fellow of the Royal Society.

xxxxxIncidentally, a similar process to that devised by Bessemer was invented by the American ironmaster William Kelly (1811-1888) as early as 1851 while working at his iron works at Eddyville, Kentucky. In 1856, on learning that Bessemer had obtained a number of American patents, he made his own claim, and in 1857 managed to convince the U.S. Patent Office that he was the first to invent the process. In the same year, however, he went bankrupt and he did not resume production until 1859. 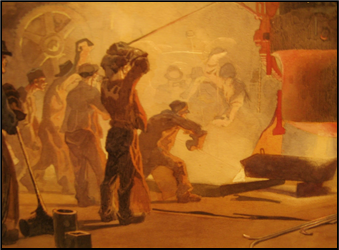 xxxxxFivexyears after the introduction of the Bessemer process, an alternative method of producing steel was invented simultaneously by the German-born British inventor William Siemens (1823-1883) and the French engineer Pierre-Émile Martin (1824-1915). Known as “the Siemens-Martin open hearth process” (illustrated), this proved a more flexible and economical method, and was widely adopted in both Britain and the United States. Thenxlater, in 1875, the English metallurgist Sidney Gilchrist Thomas (1850-1885), working with his cousin Percy Gilchrist (1851-1935), invented a means of removing phosphorus from iron within the Bessemer converter. Known as the Thomas-Gilchrist process (or the basic Bessemer or Thomas process) this proved a major improvement, particularly in Europe, where there was an abundance of iron ores rich in phosphorus.

xxxxxOver the next hundred years these two processes - the basic Bessemer and the open hearth - produced the bulk of the world’s steel, and brought a marked increase in the development of railroads across the world, often supervised by British engineers. And cheaper steel also brought a boom in steamship building, particularly in Britain. By the end of the century Britain had more registered shipping tonnage than the rest of the world put together. Inxthexfield of armaments the German industrialist Alfred Krupp (1812-1887) was the first to introduce the new steel-making processes into Europe. By the early 1860s he was selling guns to Egypt, Belgium and Russia and, by his death in 1887 he was supplying arms to close on 50 nations. As we shall see, his guns played an important part in securing Germany’s victory in the Franco-Prussian War of 1870 (Vb). 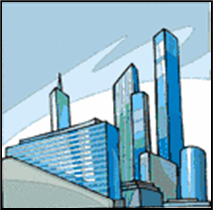 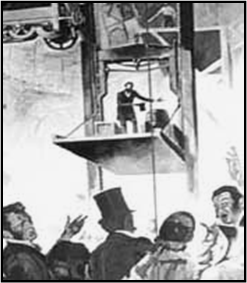 xxxxxAnd a plentiful supply of cheap steel made a visible impact upon the construction industry. Thick masonry walls gave way to steel frames, and these enabled the building of multi-storey office blocks - the forerunners of the modern “skyscraper”. Thexten-storey Home Insurance Company Building in Chicago, built by the American engineer and architect William Le Baron Jenney in 1855, was the first to have a steel-girder construction - much lighter and stronger than cast iron - and many more were to follow. Andxa corollary to this high-rise development was the need for a lift. The first one, operated by steam power, was constructed by the American engineer Elisha Otis (1811-1861) in 1852, but there were fears as to its safety. Two years later he was obliged to take part in a public demonstration in New York City (illustrated) to prove that a built-in safety device would stop the “elevator” if the cables broke! As a result, the first of many passenger lifts was installed in 1857.

xxxxxIncidentally, the term “skyscraper” was originally applied to buildings which were ten to twenty storeys high, but by the 20th century it was only being used to describe buildings over forty storeys in height. 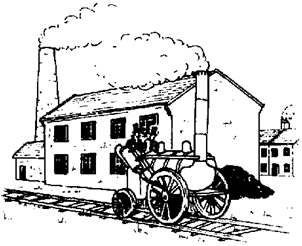 xxxxxAs we have seen, an earlier innovation in the production of iron, Cort’s puddling process of 1784 (G3b), ushered in the Age of Iron and, together with other factors, was to give Britain a head start in the Industrial Revolution. At the same time the introduction of the rotary engine by James Watt - a significant advance on the Newcomen steam engine - began the move towards the factory system, with steam replacing animal and water power.

xxxxxThe cotton industry, mechanised over the years by hands-on inventors like John Kay, James Hargreaves, Richard Arkwright, Samuel Crompton, and Edmund Cartwright, led the way. The year 1785 saw the first installation of a steam engine in a cotton factory, and by 1806 the industry was employing some 90,000 factory workers and double that number of handloom weavers. Soon other manufacturers, like those producing woollens, paper, flour and pottery, were moving into factories situated close to the new source of power - coal. The coalmines of the north became the new centres of production and employment.

xxxxxAt first, this large scale move to factories - places of organised work - was very much dependent upon the improvement of roads and the extension of canals, the only means by which raw materials could be brought to their place of manufacture, and the finished products could be conveyed to their market places. Then in 1830 this transport system received the promise of much greater expansion with the opening of the world’s first railway, accomplished by the engineer George Stephenson. Within a few years this new method of transport was paying an ever increasing part in the country’s industry. This, coupled with the growth of steamship production, enabled factory-built products to be moved to ports and shipped to markets across the world.

xxxxxBut this sudden acceleration in industrial development only served to intensify the country’s move towards an urban society, already well under way. In the sprawling, overcrowded cities like Leeds, Manchester and Liverpool, living and working conditions were often appalling, child-labour was rife, and social problems abounded. It was to be many years before conditions were improved. Meanwhile politically, a large measure of power was now transferred from the landowner to the industrialist. Capitalism, with both its potential benefits and shortcomings, had come to stay. 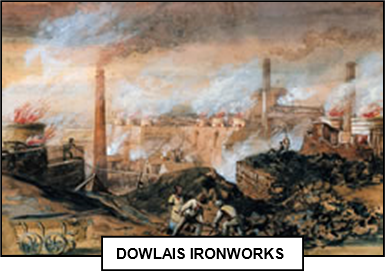 xxxxxThe Great Exhibition, held in 1851, clearly demonstrated Britain’s industrial supremacy. By then coal production had increased five fold, the manufacture of pig iron accounted for half the world’s output, and 6,800 miles of railway had been opened. In addition, the value of exports and capital investment overseas had more than tripled, and Britain was responsible for over a third of the world’s industrial output. A number of factors had combined to make Britain the “workshop of the world”. Not least amongst these was the increase in the country’s population and the larger workforce this provided, a plentiful supply of natural resources, notably coal and iron ore, and the abundance and variety of raw materials imported from British colonies worldwide. And underpinning these advantages was a work shop environment that favoured and encouraged enterprise, a stable political system, and a monetary policy which managed to keep interest rates low and investment high.

xxxxxBut this impressive industrial lead was not to last. By the 1830s Belgium was fast becoming an industrial nation, based on a rich supply of coal and iron ore, and served by a growing network of railway construction. In France too, despite long years of war and troubled peace, industry was expanding in the coal-rich regions of the north, whilst Germany, once united in 1871, quickly became a dominant industrial power, based largely on the Ruhr valley. Holland, Sweden and Japan entered the field towards the end of the century, followed by Russia and Canada in the early years of the 20th century. All learnt from the British example, its mistakes as well as its merits. Meanwhile, across the Atlantic, the United States was taking advantage of its large population, its vast reserve of natural resources, and its emphasis on free enterprise. The mechanised textile industry of New England had been established as early as the late 18th century, greatly assisted by Eli Whitney’s revolutionary cotton gin, and throughout the 19th century th

e advantages of the factory system were extended to a host of other industries. By the turn of the century the United States, using the improved methods of steel production, was destined to outstrip Britain’s output in coal and iron, and to develop an industrial system which was to take greater advantage of interchangeable parts and the benefits of mass production.

xxxxxIncidentally, throughout the Industrial Revolution in Britain, the country’s commercial and administrative centre, London, grew substantially in size. A population estimated at about 600,000 in 1701 had increased to nearly a million a century later, and had reached two and a half million by 1851 - making it the largest city in the world.

xxxxxAs we have seen, Cort’s puddling process of 1784 (G3b) ushered in the Age of Iron, and gave Britain a head start in the Industrial Revolution. At the same time the introduction of the rotary engine by James Watt began the move to the factory system, with steam replacing animal and water power. The cotton industry, mechanised over the years by a string of inventions, led the way, but soon other industries, including those making woollens, paper, flour and pottery, built factories near to other coalmines of the North, the new sources of power and employment. This move from the cottage to the factory system necessitated the improvement of roads and the building of canals, a transport network which was greatly augmented in the 1830s by the advent of the railways. Soon manufactured goods were being shipped across the world. The Great Exhibition of 1851 clearly demonstrated Britain’s industrial supremacy. Britain had become the ”workshop of the world”, responsible for one third of the world’s industrial output. But this lead was not to last. First Belgium and France, and then Germany began their own industrial revolutions, leading the way on the continent of Europe, whilst in the United States advantage was soon taken of the country’s large population and vast natural resources. There, industrial production outstripped that of Britain’s by the end of the 19th century, greatly assisted by the benefits of mass production.