xxxxxThe English philosopher Jeremy Bentham was the founder of Utilitarianism, the idea that all legislation should aim at “the greatest happiness for the greatest number”. This somewhat vague doctrine was contained in his An Introduction to the Principles of Morals and Legislation, published in 1789. There was a need to maximize pleasure and minimize pain. A political and social reformer, he became the leader of the Philosophical Radicals, a group which included James and John Stuart Mill and David Ricardo. He supported both the American and French Revolutions, whilst at home he called for a reform of the poor law, and universal male suffrage. In economics, his Defence of Usury of 1787, and his Manual of Political Economy of 1798, came out in favour of “laissez faire”, restricting to a minimum the role of the government. He also argued that the English legal system was not meeting the needs of a changing society. His most noted disciple was the English economist John Stuart Mill. 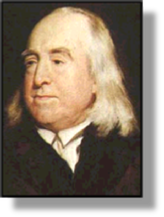 xxxxxThe English philosopher and social reformer Jeremy Bentham was the founder of Utilitarianism, a theory based on the thesis that the aim of the individual and of all legislation should be to attain “the greatest happiness for the greatest number”. Contained in his An Introduction to the Principles of Morals and Legislation, published in 1789, this somewhat vague doctrine argued that the need was to maximize pleasure and minimize pain, and the extent to which it achieved this was a measure of the “utility” of any law. In pursuing this idea further, he maintained that, given a certain action, the relationship between pain and pleasure could be measured.  He thus came up with a “hedonistic calculus”, a sort of moral-mathematical scale of pleasures and pains from which, he argued - not too convincingly perhaps - moral and social decisions were able to be made.

xxxxxBentham was born in London and, as a child prodigy, was reading learned treatises by the age of four, and mastering Latin and French at the age of six. After attending Westminster school, he went up to Queen’s College, Oxford at the age of 12. He trained as a lawyer, but soon turned to examining the legal system itself and developing a general theory on morality. Arriving at what he called his “principle of utility”, his ideas gathered support, and he became the leader of a group known as the Philosophical Radicals. Devoted to the cause of social, legal and political reform, this group included James and John Stuart Mill and the political economist David Ricardo. 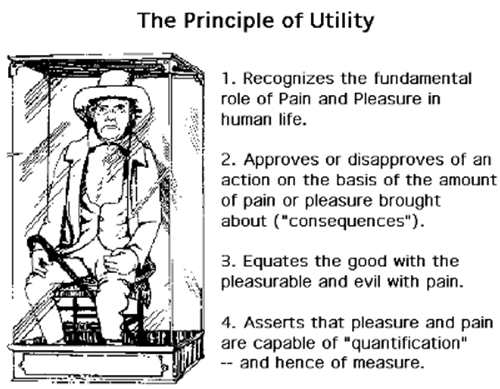 xxxxxUnlike the English philosopher William Paley, whose Principles of Moral and Political Philosophy of 1785 gave support to Utilitarianism simply in the matter of ethics, Bentham saw his theory as being harnessed for political, social and legal reform. In the matter of politics he supported both the American and French revolutions, whilst at home he called for the reform of the poor law and, in his Catechism of Parliamentary Reform, published in 1817, came out in favour of universal male suffrage, secret ballots, and the holding of annual elections. Meanwhile in economics he was an apostle of laissez-faire capitalism, spelled out in his Defence of Usury in 1787 and his Manual of Political Economy of 1798. He accepted that Government had a role to play, but contended that it should be confined to providing a minimum wage, and safeguarding the individual and his property. Other than this, each person should be able to pursue his or her own interests without restriction.

xxxxxAs one might expect, he also held strong, forward-looking views on the law. His first book Fragment on Government, published in 1776, took the English jurist William Blackstone to task, declaring that his Commentaries took too sanguine a view of the English legal system, failing as they did to take adequate account of the needs of a changing society. Like the French philosopher Voltaire, he opposed the death penalty, and, supposing as he did that every individual was rational in his reasoning, contended that the would-be criminal, motivated by enlightened self-interest, would be deterred from crime because of the pain awaiting him on being apprehended. He went so far as to design a model, somewhat bizarre prison, his Panopiticon, in which the punishment would fit the crime. Towards the end of his life he began a codification of constitutional law, but died before it was completed.

xxxxxBentham’s major work, An Introduction to the Principles of Morals and Legislation, made him world famous, and his ideas had a marked influence on 19th century  reforms, particularly in Britain’s political and judicial system. As we shall see, his doctrine of utilitarianism was refined as well as developed by his most noted disciple, the English philosopher and economist John Stuart Mill.

xxxxxIncidentally,  thexterm “the greatest happiness of the greatest number” was not invented by Bentham, but was coined earlier by the Italian criminologist Cesare Beccaria (1738-1794). His opposition to capital punishment, his stress on education as a means of preventing crime, and his powerful attack upon abuses in the criminal law system - views contained in his masterly Essay on Crimes and Punishments of 1764 - greatly influenced Bentham’s thinking. ……

xxxxx……  As a social, political and economic theory, Bentham’s utilitarianism has survived in some form to this day, as, indeed, has Bentham himself. In accordance with his wishes, when he died his body was embalmed in the presence of his friends, and his skeleton, dressed in his customary clothes and provided with a wax replica of his head, was placed in a glass cabinet. It can be seen to this day at University College, London, which, along with James Mill and others, he helped to found in 1825. ……

xxxxx……  An earlier attempt at embalmment had been carried out by the distinguished Scottish surgeon John Hunter, one time tutor to the English physician Edward Jenner. In 1775 he embalmed the body of a Mrs Martin van Butchell. Her will stipulated that her husband could only inherit her fortune if her body remained above ground. Not to be outdone, Mr Butchell had her body embalmed - dressed in the height of fashion - and placed in a glass-topped case in his sitting room. By all accounts she could be visited at certain times of the day!