xxxxxThe Reign of Terror came to an end with the fall of Robespierre in July 1794, but the period that followed - the Thermidorian Reaction - was beset with problems. There were uprisings demanding bread and political reform, and royalists re-emerged intent on bringing down the republic. On the battlefield, however, it was a very different story. Here a series of successes, culminating in the Battle of Fleurus, led to a breakdown of the First Alliance. By the Treaties of Basle in 1795, Prussia - deeply involved with the final Partition of Poland - withdrew from the war, and Holland, Sweden and Spain quickly followed this lead. Meanwhile at home the National Convention had drawn up a new constitution - The Directory, a five-man executive body elected by a lower house (the Council of Five Hundred), and a Senate of 250 called the Council of Ancients. But a decree providing for the election of so many members from the National Convention - to ensure the survival of republicanism - angered the royalists in Paris, and in October they rose up to destroy the government. Fortunately for the Convention, the young General Bonaparte swiftly crushed the revolt, and The Directory was established. As we shall see, its first aim was to take the fight to the Sardinians and Austrians. Bonaparte was given the task of attacking both of their armies in northern Italy, and his brilliant campaign, completed in 1797, was to make his name as soldier and diplomat.

The Battle of Fleurus 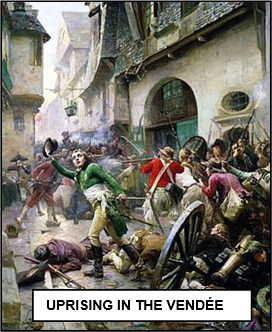 xxxxxButxthe removal of these outward symbols of bloody repression in no way solved the problems of the hour. The period that followed on from the Reign of Terror - often referred to as the “Thermidorian (July) Reaction” - was presided over by a government severely weakened by runaway inflation and outbreaks of serious disorder. In Paris gangs of draft-dodgers roamed the streets causing mayhem, and in the spring of 1795 there were two uprisings by the sans-culottes, demanding bread and political reform. Then in May a “white terror” campaign, conducted by royalists, broke out across the south-east and in the west - where its members were known as Chouans. The death in the following month of the young dauphin Louis Charles (heir to the throne) somewhat checked this monarchist movement, but, in fact, it was only the brutal use of the republican army which put an end to these threats to the government.

xxxxxAnd it was this same republican army that turned the tide on the battlefield. As we have seen, it was the military strategist Lazare Carnot, a member of the Committee of Public Safety, who, more than anyone else, had been the architect of this new military machine. Working as from August of 1793, he had raised the first national conscript army, a vast enlistment of some 800,000 men, made up into 14 well-equipped fighting forces. Initially deficient in training and experience, what this army lacked in professionalism it more than made up for by its revolutionary zeal. In this respect, it must be said, the Terror, however frightful in practice, had accomplished its aim of stiffening the country’s resolve against a powerful alliance of monarchies. When the terrorism came to an end, France still remained at heart a nation committed to revolution - and not only for home consumption. The invaders were soon to find themselves invaded. 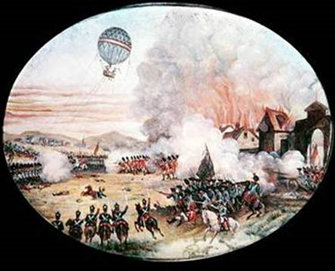 xxxxxAs we have seen, as early as October 1793 the French general Jean Baptiste Jourdan had defeated the Austrians at Wattignies-La-Victoire, and this was followed in June 1794 by an even greater victory at the Battle of Fleurus, one of the most significant conflicts of the early Revolutionary Wars - and the first one in which a captive (tethered) hot-air balloon was used for aerial observation (illustrated). Here, as was to be the case in some future engagements, the French outnumbered their enemy. In this instance their army of 73,000 faced an Austro-Dutch force of no more than 52,000. As a result the French were able to absorb heavy loses and still counterattack in strength, driving their enemy across the River Meuse and out of contention. This opened the way for the re-conquest of the Austrian Netherlands - promptly annexed to France - and the occupation of Holland. And by this time, too, the Prussians and Austrians had already been driven back across the Rhine, and the Spanish forces in the south had been routed and pursued into Spain itself.

xxxxxSuch was the success of the French armies, that by the spring of 1795 a number of France’s opponents were prepared to come to terms. This string of agreements, sometimes known as the Treaties of Basle, began in April when Prussia, at loggerheads with Austria over the size of its share in the final Partition of Poland, turned neutral. France responded by making peace with a number of German states, including Saxony, Mainz and the Bavarian Palatinate. Holland, which, by then had been overrun and turned into a republic, made a settlement the same month by which it was obliged to accept its status as a virtual French satellite. Then in May, Sweden agreed to withdraw its opposition, and in July Spain, ceding her part of the West Indian island of San Domingo, abandoned the coalition and settled for peace.

xxxxxThese agreements enabled the Convention to complete its work in drawing up a new form of government, the “Constitution of the Year III” (as the republican calendar would have it). The Directory, as the executive power was called, was in the hands of five men, elected for a term of five years by a legislature composed of a lower house called the Council of Five Hundred, and a Senate of 250 called the Council of Ancients. These two bodies were to be elected on a limited franchise, and, by special decree, two thirds of the new parliament was to be drawn from the Convention, thereby preventing a slide back to terror or monarchy. 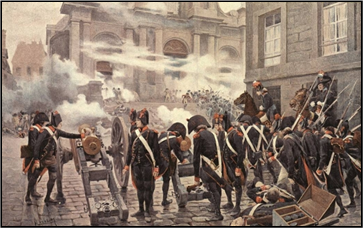 xxxxxThis liberal settlement was approved by plebiscite and put into effect in November, but not before an attempt was made to strangle it at birth. The provision whereby the republican ideals of the Convention would be perpetuated, brought violent opposition. Moderates and royalists alike took up arms against what they saw as a blatant infringement of electoral liberty. In the first week of October (13th Vendémiaire An IV) a vast multitude, put by some as 26,000 strong, assembled from all parts of the city and prepared to march on the National Convention. Fortunately for the government, a young officer by the name of General Napoleon Bonaparte happened to be in town at this time. Having already distinguished himself by his recapture of Toulon in 1793, he was assigned the task of putting down the insurrection. This he promptly achieved by what he later described as “a whiff of grapeshot”. Having hurriedly brought up some artillery overnight, he ordered the firing of one brief cannonade as the columns of insurgents approached the government chambers via the Rue St. Honoré. Stopped in their tracks, the vast crowd broke up in disorder and fled, leaving hundreds of their comrades dead or dying in the street (illustrated). 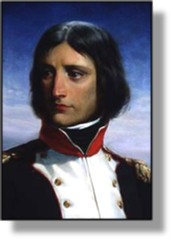 xxxxxOnce secure, the Directory now felt able to turn its attention to those countries which still threatened the new order in France. It conceded that the island state of Britain was, for the present at least, beyond direct action, but not so Austria and Sardinia. Under plans drawn up by Carnot, a member of the Directory, two armies were prepared for a direct assault on Germany, and put under the command of Generals Jourdan and Morau. The young General Bonaparte (illustrated), in recognition of his timely defeat of the October resurrection, was appointed commander of a third, subsidiary army, designed to attack the Austrian territories in northern Italy and the kingdom of Piedmont-Sardinia. Here, as we shall see, despite his small and poorly equipped force, he conducted a brilliant campaign, eventually forcing the Austrians to make peace at the Treaty of Campo Formio in October 1797. By then Napoleon Bonaparte had made his name as a politician as well as a military strategist. Within two years he was to convert a would-be democratic republic into a genuine dictatorship.