xxxxxAs we have seen, Henry the Navigator, having established his seafaring school at Sagres in 1419 (H5), played a large part in the exploration of the west coast of Africa. By his death in 1460 his navigators had reached as far as Sierra Leone. Later, in 1482, Diogo Cao sailed further south and discovered the mouth of the river Congo. He searched in vain, however, for a sea route to the east - though he thought he had found it on reaching Cape Cross. 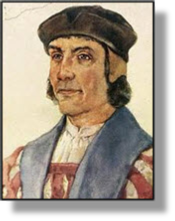 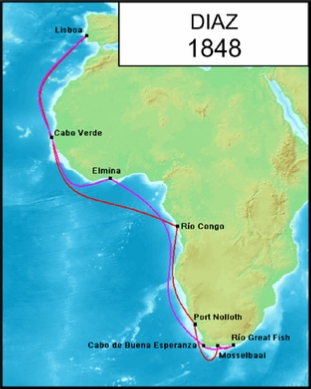 xxxxxIt was in 1486 that King John II of Portugal appointed his able navigator Bartolomeu Diaz to continue the exploration of the west coast of Africa beyond the discoveries made by Diogo Cao. He sailed from Lisbon in August 1487 and in February 1488 became the first European to round the southern tip of Africa. It was a discovery of immense importance, opening up as it did the long sought-after sea route from Europe to the lands of the Far East across the Indian Ocean. He went on to reach what came to be known as the Great Fish River on the east coast of Africa and, on his return journey, named the southern tip of Africa Cabo Tormentoso, the Cape of Storms - for obvious reasons. It is thought to be King John who later gave it the name Cabo da Boa Esperance, the Cape of Good Hope.

xxxxxAn accomplished sailor, Diaz explored over 1200 miles of the African coastline - most of it previously unknown - and in 1497 took part in Vasco da Gama's celebrated voyage to India, though he himself only went as far as the Verde Islands just off the west African coast. In 1500 he commanded one of the small ships taking part in a further voyage to India. Led by the Portuguese navigator Pedro Cabral, this expedition first sailed across the Atlantic, discovering and landing in Brazil before making for the Cape of Good Hope. Ironically enough, it was here, during a storm, that he was drowned, in the very waters which had brought him fame and a secure place in the history books.

xxxxxAs we have seen, having established his seafaring school at Sagres in 1419 (H5), Henry the Navigator sent expeditions south along the west coast of Africa. In 1482 Diogo Cao discovered the mouth of the River Congo, but it was left to Bartolomeu Diaz, appointed by King John II of Portugal, to become the first European to round the southern tip of Africa in 1488, thus opening the vital sea route from Europe to the Far East. He went on to the Great Fish River on the east coast of Africa before turning back. In 1497 he took part in Vasco da Gama's voyage to India - as far as the Verde Islands - but in 1500, taking part in Pedro Cabral's expedition to India, his ship was sunk in a storm and he was drowned off the very cape he had rounded so successfully twelve years earlier.

xxxxxThe Portuguese navigator Pedro Cabral led an expedition to India in 1500 but, sailing too far west on leaving Lisbon, he first landed on the coast of Brazil and claimed this country for Portugal! In rounding the Cape of Good Hope he lost four ships with all hands, including Diaz, but eventually reached India and set up a trading post at Calicut. He returned to Lisbon in July 1501 after losing another five vessels.

xxxxxThe Portuguese navigator Pedro Cabral (1460-1526) was a nobleman by birth. It was on the advice of Vasco da Gama that he took a south-westerly course on leaving for India in 1500. By accident he sailed too far west and that is how he turned up in Brazil! He stayed there for ten days and then, having claimed the country for Portugal, he made for the Cape of Good Hope and India. While rounding the cape a violent storm sank four of his ships. All hands were lost including the explorer Diaz. 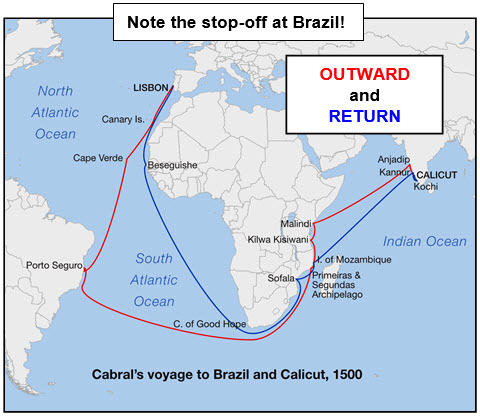 xxxxxHe eventually reached India, where he called at a number of ports and set up a trading post at Calicut. This post was later destroyed by a large Muslim force, but before leaving for home he managed to negotiate a commercial agreement between Portugal and India, the first of its kind. He lost more ships on his return journey and arrived at Lisbon in July 1501 with only four out of his original fleet of thirteen vessels. A larger expedition to India was then organised with Cabral the likely commander, but after some kind of dispute, the appointment went to Vasco da Gama, and the man who claimed Brazil for Portugal went into retirement.

xxxxxIncidentally, it is quite likely that the Spanish navigator Vicente Yáñez Pinzón, the youngest of three sea-faring brothers, arrived off the north coast of Brazil just a short while before Cabral's visit, but thinking his discovery of little importance, made no claim to the land! As it so happens, however, the revised Treaty of Tordesillas, made between Spain and Portugal in 1494, would have made his claim null and void anyway! ……

xxxxx…… As we shall see, in 1501 an expedition commanded by the Italian navigator Amerigo Vespucci was sent to Brazil, then named Terra da Vera Cruz (Land of the True Cross) by the Portuguese government. He named a number of physical features, including the bay he called Rio de Janeiro (River January). It was during this voyage that he became convinced that the coastline he was tracing was that of an entirely new continent. He returned with a cargo of brazilwood, and it was this valuable red wood (pau-brasil) that gave the colony its official name. A systematic programme of colonization by the Portuguese was not begun until the 1530s, during the reign of John III.