xxxxxOn coming to power in 1152 the ambitious Frederick I (Barbarossa), king of Germany and the Roman Empire, was bent on reducing the power of the Church and extending his authority in northern Italy. Adding "Holy" to his title, he was soon in conflict with the Papacy and the city states of Italy. Totally ignoring the Concordat of Worms of 1122, he invested his own bishops and, when the pope laid claim to his land, he appointed a series of anti-popes (substitute popes). Fortunately for the then pope, Alexander III, he found a ready ally in the Lombard League, formed to oppose the Emperor's ambitions in northern Italy. The war there was a bitter one. Frederick led no less than six expeditions into Italy and caused much havoc and destruction. Eventually, however, his forces were defeated at the Battle of Legnano in 1176, and the cities of northern Italy virtually regained their independence (confirmed by the Peace of Constance in 1183). Meanwhile, by the Peace of Venice, held in 1177, he was reconciled with Alexander. Despite these climb-downs, it must be said that at home Frederick proved a capable leader who did much to achieve national unity and advance the standing of Germany. In 1190 he joined the Third Crusade and was drowned while crossing a river in Cilicia in modern Turkey. 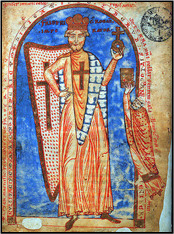 xxxxxWhen Frederick I (nicknamed Barbarossa - "red beard") was elected King of Germany and Roman Emperor in 1152, he regarded his imperial office as God-given. He prefaced his title with the word "Holy" - assuming some kind of mystical authority in the advancement of the Christian faith - and he saw it as his destiny to establish Germany as the major country in Western Europe and to re-assert imperial power in Italy, the land of the Caesars. With such exalted aims in view, it is hardly surprising that he found himself locked in a struggle with the then Pope Alexander III for close on twenty years (1159-1177) and was engaged in conflict with the cities of northern Italy for nearly thirty years (1154-1183)

xxxxxFrom the start, Frederick totally disregarded the rights won by the pope during the long drawn out struggle between Church and State over the investiture of bishops and abbots. He filled several vacant episcopal sees (seats) in flagrant violation of the Concordat of Worms of 1122, and when, in 1156, the then pope, Adrian IV, implied that the Emperor's lands were, in fact, granted by the pope, the break was complete. Frederick set up a series of anti-popes against Adrian's successor, Alexander III, and was excommunicated by him in 1160. Butxhis struggle against the pope took a turn for the worse when, in 1167, a military alliance known as the Lombard League was formed to oppose Frederick's ambitions in northern Italy. The pope, who had often been forced into exile by the German invasions and had long supported Milan and its allies, now had a military force to defend his cause. 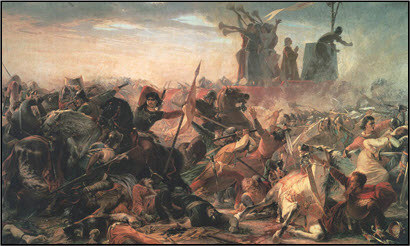 xxxxxThe Lombard League began as an alliance between four cities of northern Italy, but soon became a force to be reckoned with when other cities joined, including Padua, Milan, Verona and Bologna. The League was a direct result of Frederick's ambitious plans to establish his imperial power in Italy. He made no less than six expeditions into Italy. In the north, in particular, he caused havoc and destruction, imposing heavy taxes on the cities, and demanding that they recognise his royal rights. Inx1176, however, the Lombards proved strong enough to take on the Emperor's forces - many of them mercenaries - and to roundly defeat them at the Battle of Legnano (illustrated). Frederick's ambitious plans for Italy were at an end. Thexcities of northern Italy virtually regained their independence - confirmed later in the Peace of Constance 1183 - and the Emperor was obliged to recognise Alexander III as Pope at the Peace of Venice in 1177, publicly declaring his change of heart by receiving the kiss of peace from the pope in front of St. Mark's cathedral.

xxxxxBut Frederick's failure in Italy must not be allowed to distract from his long and, in many ways, outstanding reign. His determined opposition to the secular power of the Pope, his success in deposing Henry the Lion - the most powerful prince in Germany - , and his abiding belief in the sanctity of the monarchy and the ancient rights of a European Emperor, all made him an impressive symbol of national unity. In his day, Germany was, indeed, a major, if not the major power in Europe. He did not achieve total unity of his country, he lost much of imperial control in Italy, and he was finally obliged to submit to papal authority, but he was an astute, powerful and impressive leader despite his eventual failure and defeat.

xxxxxIt was Frederick I who, in the Spring of 1189, following the fall of Jerusalem to the Muslim leader Saladin, called for the mustering of the Third Crusade. The following year he set out for the Holy Land himself and, after defeating the Muslims in two battles, was drowned while crossing a river in Cilicia (today's Turkey).

xxxxxIncidentally, the Battle of Legnano is important in the history of warfare, it being the first major battle in which infantry triumphed over an army of mounted feudal knights. The days of the heavily-armoured soldier on horseback were clearly numbered, but it was to be many centuries before cavalry as such were to disappear from the field of battle.

xxxxxIn January 1849 the Italian composer Giuseppe Verdi produced an opera based on the Battle of Legnano.