xxxxxFollowing their humiliating defeat at the hands of the Prussians in 1866, the Austrians lost the last of their possessions in Italy and were forced out of an enlarged German Federation. As a result, the Emperor, Franz Joseph, anxious to save the Habsburg monarchy, engineered a joint agreement with Hungary, where the Magyars constituted the principal danger to the unity of the state. By what came to be known as the Compromise (Ausgleich) of 1867, the Hungarians were made equal partners in the ruling of the empire. They were granted their own parliament and prime minister for internal affairs, and joint ministries were set up for matters of finance and foreign policy. A Nationalities Law was also passed, designed to protect the rights of the large number of minority groups, but this did not work in practice, and many of these took up the struggle for independence. For a number of years the Dual Monarchy managed to retain some status as a great power, but by the last decade of the century its alliance with Germany, aimed at restricting Russian influence in the Balkans, brought ever growing opposition from the large number of Slavs living within the empire. Therein lay the seeds of the First World War. When this conflict came to an end in 1918 so did the state of Austria-Hungary.

CREATION OF THE DUAL MONARCHY OF AUSTRIA-HUNGARY 1867  (Vb)

xxxxxAs we have seen, it was in 1866 that the Austrians suffered an humiliating defeat at the hands of the Prussians. It was an enormous blow to the pride and the prestige of the once all-powerful Habsburg dynasty.  At the end of a war which lasted no more than seven weeks, their army was out manoeuvred and outgunned at the Battle of Sadowa, and all was lost. 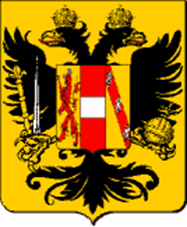 xxxxxThe manner of their defeat came as something of a surprise to a Europe grown accustomed to the might and majesty of the Habsburgs, but, in fact, the strength of the Austrian Empire had been ebbing away for some considerable time. The Austrians had suffered a major set back only a few years earlier when they were forced out of Lombardy in northern Italy by the War of 1859,  whilst  at home their multi-national empire had faced widespread instability over a number of years. In 1848, for example, the so-called Year of Revolutions, Hungary had come close to gaining its independence, whilst, at the same time, Bohemia had led a highly threatening movement to unite all the Slavic peoples within the diverse empire. The Czech uprising had been quickly suppressed, but it had required the intervention of the Russian army on a fairly large scale to force the Hungarians to surrender. By 1851 the Habsburgs had managed to regain control of their territory, but among the empire’s many national minorities, the movement for reform if not for independence simmered and bubbled dangerously just beneath the surface.

xxxxxThe peace terms agreed at Frankfort following Austria’s defeat in 1866 appeared to be moderate considering the extent of the Prussian victory but, in fact, they were anything but. They put an end once and for all to Habsburg hopes to keep a stake in northern Italy and, more significantly, to secure a dominant role in the affairs of central Europe. The Austrians not only lost Venetia, their last possession in Italy, but were also ignominiously turfed out of the revamped German Federation. The Prussians were to be the leading and guiding light in the future affairs of a united Germany, not the Habsburgs. 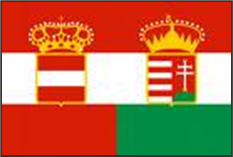 xxxxxIt was their defeat on the battlefield, and their long-term failure to come up with much needed constitutional reforms at home, that led to what is known as the Dual Monarchy of 1867. Given the need to keep his lands united - even if only loosely in some cases -  the Austrian monarch Franz Joseph was compelled to make the Hungarians equal partners in the ruling of his empire. This reshaping of the constitution was based on a compromise, and came to be known as such: Ausgleich. By it, Hungary obtained a large measure of the independence it had long sought, and Austria was able to put in place a centralised government which was strong enough to weather the political storm and, at the same time, regain some degree of international prestige. The new dual state of Austria-Hungary remained the second largest country in Europe, and the third largest population. This had to count for something.

xxxxxThe Compromise arrangement granted the Hungarian government, based in Buda, equal status with the Austrian government, based in Vienna. With their own parliament and prime minister, the Hungarians gained complete control over their internal affairs but, in return, agreed to a common monarch ( with the title of king in their case), and the setting up of joint ministries responsible for war, finance and foreign affairs. Currency was unified throughout the empire, and the regular armed forces were put under a unified command, but there were separate custom authorities and the choice of language - always a thorny problem - was to be decided locally. In his role as emperor/king, Franz Joseph was to rule as a constitutional monarch via parliaments elected by the propertied classes in both states - the Reichstat in the case of Austria and the Diet in Hungary. (However, emergency powers were retained by the monarch, and these came to be used when internal disorder threatened the future of the state towards the end of the century.) 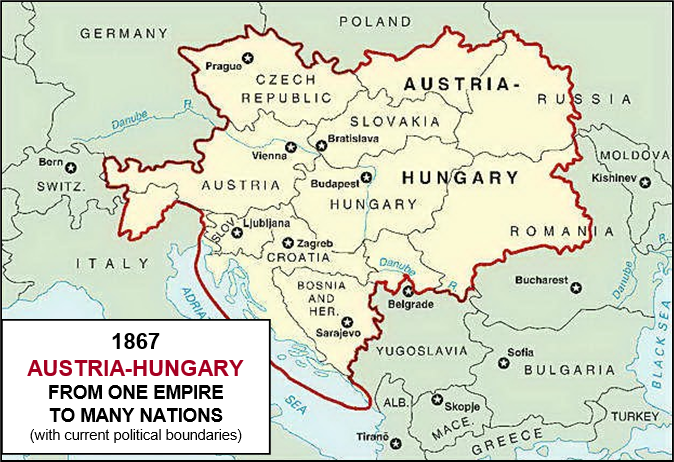 xxxxxThe Compromise was accepted by Franz Joseph and the nobles on both sides of the joint agreement because it was seen as a ready means of dampening down the aspirations of the Hungarian Magyars, the section that posed the principal danger to the unity of the state. However, it did little or nothing to ease the widespread racial tensions that existed elsewhere between the large variety of cultures and races which made up more than half the empire’s diverse population. Because it was considered that these smaller groups, like those of the Czechs, Poles, Slovenes, Slovaks, Serbs, and Romanians, were not cohesive enough to make possible a workable autonomy - arguable in some cases -  the new constitution included the Nationalities Law. In theory, this was specifically designed to ensure that the legal rights of all minority ethnic groups were fully preserved, but in practice it was seldom used and, when invoked, seldom enforced. Nor was this demand for national identity confined to the minority groups. There was a growing element in Hungary that wanted full independence, not just a resort to compromise, whilst in Austria many within the German population favoured some sort of union with Germany. And alongside this hotchpotch of grievance went the growth of political movements demanding social reform and universal suffrage.

xxxxxFor the next twenty years or so the new state of Austria-Hungary enjoyed - outwardly at least - a measure of success and security, and the Habsburgs regained something of their lost prestige. Hungary was relatively calm for the first time in decades and, in general, remained loyal to the “Compromise”, whilst Austria went through a period of moderate prosperity.

xxxxxBut the nation’s foreign policy, based on a fear of Russian expansion into the Balkan peninsula, was to land the empire in deep trouble. As we shall see, following Russia’s advance on Istanbul in the Russo-Turkish War of 1877, the Dual Monarchy openly opposed the Treaty of Solferino, by which Russia gained domination of the area. At the Berlin Conference of 1878 it supported the drastic revision of this treaty, and was allowed to occupy the Turkish provinces of Bosnia and Herzegovina. Then in 1879 Austria-Hungary concluded a defence pact with Germany, agreeing not to interfere in the internal affairs of this new, unified state in return for German support in limiting Russian influence in the Balkans. This pact became known as the Triple Alliance when Italy joined it in 1882.

xxxxxBut this rapprochement with Prussia clearly ran counter to the wishes and aspirations of the large Slavic minority in both countries. For long denied any political and social concessions, by the closing years of the century the entrapped Slavs were beginning to look to Russia for support. This, together with conflicting claims from other disgruntled minority groups, threatened stability at home and seriously undermined the empire’s status in international affairs. Therein lay the seeds of the First World War, a struggle which ended in 1918 and brought with it the downfall of the Dual Monarchy itself.

xxxxxIncidentally, it was chiefly through the efforts of the Hungarian statesman Ferenc Deak (1803-1876) that Hungary accepted the Compromise. Known as “The Wise Man of the Nation”, he publicly supported the Dual Monarchy and played a major part in drawing up the necessary legislation. 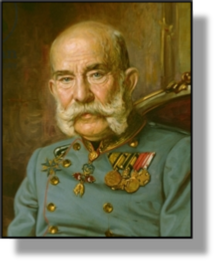 xxxxxFranz Joseph (1830-1916), the Habsburg emperor of Austria, came to the throne in 1848, Europe’s Year of Revolutions. Determined to rule as an absolute monarch, he put down a widespread revolt in Hungary with the aid of Russian troops, but in 1861, he was obliged to grant political reforms in Austria. In the meantime, his foreign policy proved a disaster. In northern Italy his army was defeated in the War of 1859, and in 1866, during the Austro-Prussian War - a seven-week conflict - the Prussians inflicted an humiliating defeat upon the Austrian forces. As a result, Austria lost Venetia, its last holding in Italy, and was excluded from the German Federation. 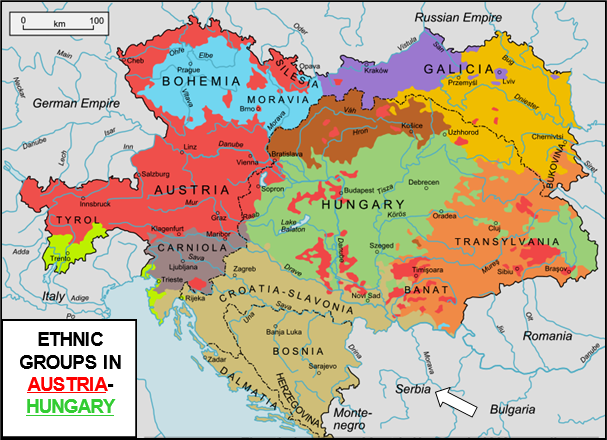 xxxxxAs we have seen, to shore up his ailing Empire, in 1867 Franz Joseph sought and managed to obtain a Compromise agreement with Hungary - the Dual Monarchy. This move appeased to some extent the large number of Magyars in Hungary, but it only served to intensify nationalism amongst the numerous minorities within the empire (see map). The Slavs in particular - who made up powerful groups in both states - reacted strongly to the empire’s foreign policy, which followed a pro-German line in order to curtail Russian influence in the Balkan peninsula. By the turn of the century both countries were facing internal disorder. When his heir and nephew Franz Ferdinand was assassinated by a Serbian nationalist in 1914, he launched an attack upon Serbia (arrowed on map) and sparked off the First World War. This came to an end in 1918 (two years after Franz Joseph’s death) and so did the Dual Monarchy.