xxxxxFollowing the death of Emperor Charles VI in 1740, and the succession of his daughter Maria Theresa, a number of European states saw the chance of grabbing hold of long-coveted slices of the Habsburg dominions. Prussia made the first move by seizing the province of Silesia, and then a Franco-Bavarian force occupied northern Austria and invaded Bohemia, taking the capital Prague. However, Maria Theresa, having secured the aid of the British and Dutch, fought back, and by 1744 had driven the French and Bavarians out of her lands and overrun Bavaria. In the meantime, as we shall see, her allies had gained a notable victory over the French at the Battle of Dettingen in 1743. 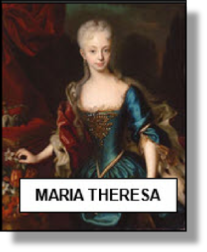 xxxxxThe War of the Austrian Succession - brought about by the death of Emperor Charles VI and the succession of his daughter Maria Theresa - was a wide ranging conflict which, once under way, brought to the surface - and to the battlefield - the bitter rivalry which had been simmering away between a number of European states, each jostling for power and position. There was, for example, the growing fear and mistrust between Austria and the emerging state of Prussia - the immediate cause of the war - , the continuing and longstanding antagonism between Austria and France, and the worldwide clash of interests between the world's two dominant colonial powers, Britain and France. It was the start of a conflict wherein lay all the ingredients for a long and bitter struggle - in this war and the one to follow. 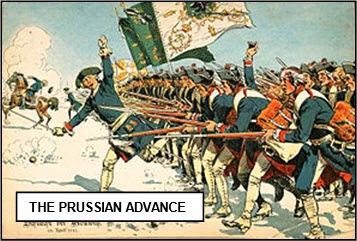 xxxxxThe Emperor Charles VI died without a male heir in October 1740 and, as had been previously agreed by a number of countries, including Prussia and France, his lands passed to his daughter, Maria Theresa (1717-1780). She became Archduchess of Austria and Queen of Hungary and Bohemia, but her transition was to be far from smooth. Twoxmonths later, Frederick II of Prussia, sensing that such a settlement would not survive, invaded Silesia in what came to be known as the First Silesian War. At the battle of Mollwitz in April 1741 (illustrated), his cavalry was quickly routed, but his infantry defeated the Austrians and overran this wealthy province. Within weeks, Spain, Bavaria and Saxony had put forward somewhat dubious claims to other parts of the Habsburg domains and, together with France and Sardinia, had joined with the Prussians. 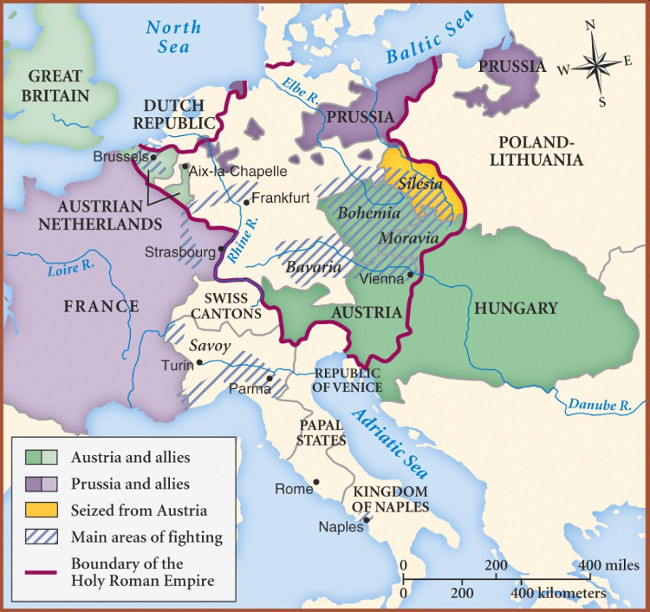 xxxxxIt seemed that Austria was about to be taken apart, but despite her depleted military and financial resources, Maria Theresa would not hear of capitulation. She stood firm in 1741 as a Franco-Bavarian force occupied Upper Austria and invaded Bohemia, taking the capital Prague. Then, having made a temporary truce with Prussia, and gained the promise of support from Britain and Holland, she went over to the offensive, driving the French and Bavarians out of Bohemia and overrunning Bavaria itself. Meanwhile, as we shall see, Austria's allies, the British and Hanovarians, together with the Austrians, took on the French at the Battle of Dettingen in 1743, and, led by George II, gained a notable victory. It was a surprising turn of events but it was not to last. By this time, Prussia had re-entered the war, and, once again, the tide moved against Marie Theresa.

xxxxxThe Pragmatic Sanction, a royal act issued by Emperor Charles VI in 1720, was an attempt to secure the succession of his eldest daughter Maria Theresa. All the Habsburg dominions gave their assent to the act, and by his death in 1740 most of the European powers had also agreed to this arrangement. However, no sooner had Maria Theresa succeeded to her father's lands - Austria, Hungary and Bohemia - than, as we have seen, a number of European powers either laid claim to her throne, or simply attempted to take Habsburg territory by force. As we shall see, it was not until the peace treaty of Aix-la-Chapelle eight years later in 1748 that Maria Theresa was recognised as the rightful successor to her father, Charles VI. 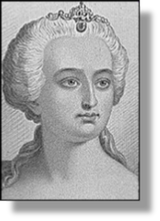 xxxxxAs early as 1711, when he became Emperor, Charles VI had been concerned over the fate of the Empire when he died. In 1713 he issued his Pragmatic Sanction, a royal act stipulating that, in the absence of a male heir, all of Austria's lands were to pass to his eldest daughter. Thus when his only son died in 1716, he bequeathed his inheritance to Maria Theresa, and in 1720 gave the Pragmatic Sanction the force of law by receiving the assent of all the estates within the Habsburg dominions.

xxxxxThen, over the next two decades he set about gaining the agreement of all the European powers to this practical (pragmatikos) arrangement. He accomplished much. By 1740, the year of his death, the electors of Saxony and Bavaria, the Diet of the Empire, Great Britain, Russia, Spain, France, the Netherlands, Denmark and Sardinia had recognised and accepted his Pragmatic Sanction. But, as we have seen, and true to form, these agreements proved worthless. With the Empire about to fall apart, the Habsburg domains were seen as up for grabs. Nearly every nation on the continent had its eye on some part of the carcass, and Prussia made the first move. As we shall see it was not until eight years later at the peace settlement of Aix-la-Chapelle in 1748 that Maria Theresa was recognised as the rightful successor to her father, Charles VI.