xxxxxHaving soundly defeated the Austrians at the Battle of Ulm in October 1805, Napoleon entered Vienna and then marched north into Moravia to take on the Russians and the remnant of the Austrian army. He advanced to Brunn, and in December 1805 found himself facing a combined enemy which outnumbered his own force by over 20,000. Anticipating that the Russian commander would attempt to outflank the French army and cut off its retreat to Vienna, Napoleon stood his ground and prepared counter measures. When his enemy did attack as he had predicted, he intercepted and drove back the flanking movements, and then launched a frontal attack upon the depleted Russian and Austrian forces holding Pratzen Plateau. After fierce fighting the French broke through their lines, and drove them towards the town of Austerlitz, inflicting heavy loses. This stunning victory was one of Napoleon’s most successful military engagements. The Austrians sued for peace within two days, and the Russian army - what was left of it - made its way home.

THE BATTLE OF AUSTERLITZ - December 1805 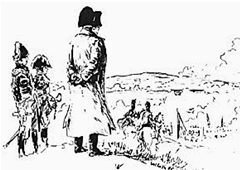 xxxxxAs we have seen, having outmanoeuvred the Austrians and soundly defeated them at the Battle of Ulm in October 1805, Napoleon made a triumphant entry into Vienna, the Austrian capital, in mid-November. But his stay was a short one. Learning that what remained of the Austrian army had moved north to join its Russian ally at Olmutz in Moravia, he gave chase without delay, fearing that the Prussians might decide to join the coalition and add their forces against him.

xxxxxNapoleon advanced his army of some 68,000 men as far as Brunn, and in December 1805 found himself facing an Austro-Russian force nearly 90,000 strong. Here he stood his ground, anticipating that the Russian commander, Prince Kutuzov, would attempt to outflank him on both sides and cut off his retreat to Vienna. And this is exactly what happened. On December 2nd, as he had suspected, the 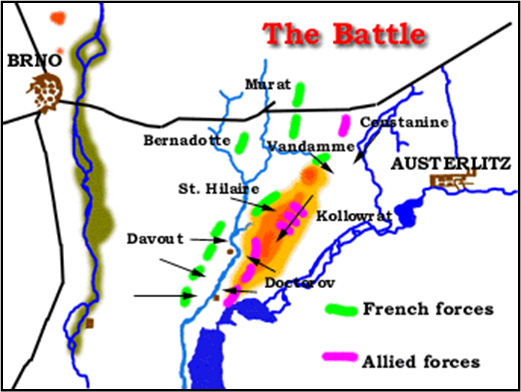 Russians advanced on his right flank (numbering about 40,000) and the Austrians on his left. Having prepared for these movements, both forces were intercepted and beaten back, and Napoleon then launched his main force, some 20,000 infantry, against the allies’ weakened centre on the Pratzen Plateau. After fierce fighting, the French captured the high ground and, reinforced by reserves, repulsed a number of attacks before breaking through the enemy’s lines and driving most of the Austrians and Russians into the small town of Austerlitz (now Slavkov in the Czech Republic). From here the coalition forces made their retreat, pounded by French artillery.

xxxxxThe Battle of Austerlitz (illustrated under Gérard below) was one of Napoleon’s greatest military engagements. Fought against a larger force, it inflicted heavy loses on the enemy (estimated at 15,000), captured some 11,000, and proved once again the French commander’s superior skill on the battlefield. Sometimes known as “The Battle of the Three Emperors” - Napoleon, Francis II of Austria and Alexander I of Russia were all present - it brought about the collapse of the Third Coalition. Austria sued for peace within two days, and Russia agreed to take its army - what was left of it - back home.

xxxxxIncidentally, War and Peace, the novel completed by the Russian writer Leo Tolstoy in 1869, gives an account of Napoleon’s victory at the Battle of Austerlitz in 1805, and of his invasion of Russia in 1812. Perhaps he can be forgiven for depicting Napoleon as a useless egomaniac! 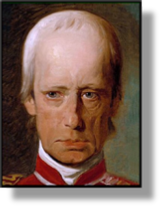 xxxxxFollowing their defeat at the Battles of Ulm and Austerlitz, Francis II of Austria (illustrated) was forced to accept the harsh terms imposed by the French at the Treaty of Pressburg (now Bratislava in Slovakia), held at the end of December 1805. The Austrians renounced all interest in Italy, giving over all their Venetian territory to Napoleon’s kingdom of Italy (including Venice, Istria and Dalmatia), whilst in central Europe, an area for so long under their sway, their power was substantially reduced. Napoleon’s protégés, Baden, Bavaria and Wurttemberg, having fought for the French, were released from all feudal ties associated with the defunct Holy Roman Empire, granted full independence, and ceded slices of Habsburg territory. In addition, Austria had to pay an indemnity of 40 million gold francs.

xxxxxIncidentally, by way of compensation, Napoleon allowed Austria to annex Salzburg (the birthplace of the composer Wolfgang Amadeus Mozart) and Berchtesgaden, where the German dictator Adolf Hitler was to build his mountain retreat, the “Eagle’s Nest”, in the 1930s. Mozart, born in 1756, was not, in fact, Austrian by birth. At that time Salzburg - one time called the “German Rome” - was in church lands within the Holy Roman Empire. 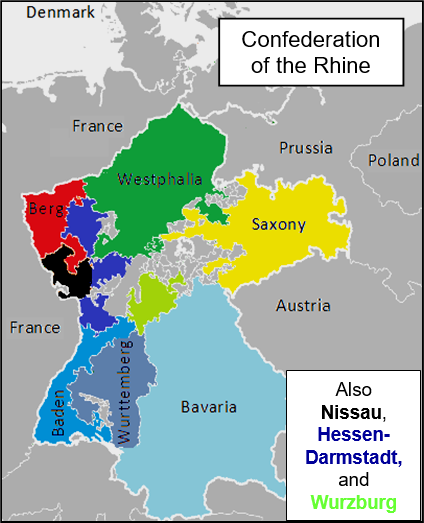 xxxxxFollowing the Treaty of Pressburg, the vacuum created by the collapse of the Holy Roman Empire was speedily filled by the Confederation of the Rhine. Engineered by the French in the summer of 1806, this comprised of all the minor states which had been dominated by the Habsburgs within the German Empire, including the enlarged kingdoms of Bavaria and Württemberg - and Saxony the following year. Some 300 principalities, dukedoms or bishoprics were reduced to 83, and each state was bound to France by treaty, and obliged to maintain a substantial defence force. Not surprisingly, Napoleon was nominated the “Protector” of the confederation. However, he simply regarded this new political set up as a strengthening of French power in central Europe, and a valuable counterweight to Austria and Prussia.

xxxxxAt the beginning of August 1806 the states within the union officially seceded from the Holy Roman Empire - and this marked the end of that large jigsaw of small states in central Europe which, since 962, had been ruled over by German kings. The Confederation that took its place meant that Francis II was obliged to renounce his imperial crown, though he hung onto the title by being declared Emperor of Austria! But the arrival on the political scene of the Confederation of the Rhine had a far greater consequence than the loss of a title. The extension of French power into central Europe via its set of puppet states was seen by Prussia as a direct threat. The Prussians had stubbornly clung onto a policy of neutrality since 1795, when they pulled out of the French Revolutionary Wars, but in the autumn of 1806, fearing the intentions of their new neighbour, they declared war on France and moved out their army. As we shall see, this decision, taken by King Frederick William III, was a disastrous one. The Prussians were to prove no match for Napoleon’s Grand Army when they met on the battlefields of Jena and Auerstadt in October 1806.

xxxxxAs for the Confederation, once formed, this sham of a union was presided over by Karl Theodor von Dalberg, archbishop of Mainz, and plans were made for the setting up of legislative bodies. At one time it was even suggested that a constitution be drawn up for this “new and improved” Germany. As was to be expected, the confederation collapsed with Napoleon’s downfall in 1813, but it did show that a form of union was possible and, in that respect, it contributed in some measure to the movement for German unification.

xxxxxIncidentally, the Vendôme Column in Paris, built by Napoleon to depict his victories over the Russians and Austrians, was completed in 1810. Modelled on Trajan’s Column in Rome, it was made of stone but was encased in bronze to provide a series of reliefs. The bronze for this work came from the thousand or more cannons captured at the Battle of Austerlitz and subsequently melted down. Erected in the Place Vendôme - hence its name - it is 44 metres high and has a figure of Napoleon on the top. During the Paris Commune of 1871 the column was pulled down, but it was rebuilt a few years later, an exact copy of the original statue. …… 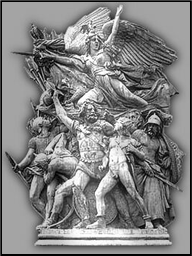 xxxxx…… Thexother great monument to Napoleon’s victorious military campaigns was the Arc de Triomphe, begun in 1806 but not finished until 1836. With a height of 164ft and a width of 148ft, it is the largest triumphal arch in the world. It was designed by the French architect Jean Chalgrin (1739-1811), and among the artists who produced the relief sculptures of Napoleon’s major victories was the French sculptor François Rude (1784-1855). He sculptured the frieze and was responsible for The Departure of the Volunteers of 1792, the relief commonly known as La Marseillaise (illustrated). Underneath the arch - situated in the Place Charles de Gaulle, Paris - is France’s Tomb of the Unknown Soldier, placed there in 1920.

The Treaty of Pressburg,

The Confederation of the Rhine 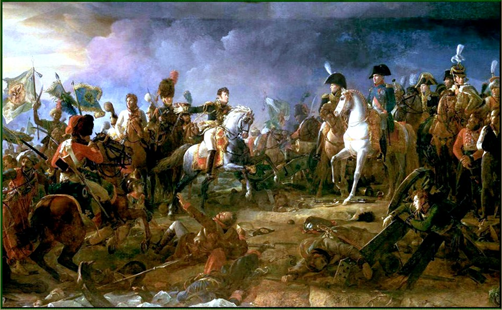 xxxxxThis painting of the Battle of Austerlitz was the work of the French neo-classical artist François Gérard (1770-1837), produced in 1807. Full of movement and drama, it depicts the moment when Napoleon hears the news of his victory. Gérard produced thirty historical paintings and a number of allegories for the history gallery at Versailles.

xxxxxThe favourite pupil of the French artist Jacques-Louis David, he completed a series of large historical paintings, but he is best known for his portraits of European celebrities, including those of Napoleon and his wife Josephine. A charming and shrewd man, he gained favour among the revolutionaries - being at one time a nominal member of the Revolutionary Tribunal - but he was warmly accepted by Napoleon and his social circle, and, following the fall of the Emperor, was appointed court painter to Louis XVIII. Later, working for Louis-Philippe and then Charles X, he was responsible for the allegorical subjects which decorate the ceiling of the Panthéon in Paris. 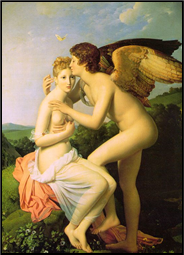 xxxxxGérard’s fame and fortune was assured in 1800 when Napoleon commissioned him for all his official portraits. From that time onwards he painted close on 300 portraits of well-known people in France. And during this period he produced paintings on the theme of Ossian to decorate the Emperor’s home at Malmaison. In all his work, David’s influence is very noticeable. His Cupid and Psyche, for example (illustrated), shows the clean, classical lines of his master. In general his portraits, notable for their studied elegance and polished finish, showed a measure of sensitivity sometimes lacking in David’s works.

xxxxxPortraits shown below (left to right) are the French poet Alphonse de Lamartine, Madame de Récamier (the subject of David’s famous portrait of 1800), the mystic Saint Teresa of Avila, and the French artist Antoine-Jean Gros.

xxxxxThe French neo-classical artist François Gérard (1770-1837) produced a famous painting of the Battle of Austerlitz in 1807. A pupil of the French master Jacques Louis David, he painted some thirty historical scenes, but he is best known for his portraits of European celebrities at this time, including those of Napoleon and his wife Josephine. His delightful Cupid and Pyche clearly shows David’s influence, and his portraits, notable for their studied elegance and polished finish, show a sensitive approach.