xxxxxThe Asiento de Negros (Negroes’ Contract) was introduced by Charles I of Spain in 1518 (H8). It was a monopoly granted for the supply of slaves to work in the American Spanish colonies. Over the years France, Portugal and Britain had entered into this lucrative contract, as had a number of individual Spaniards. Granted to Britain by the Treaty of Utrecht in 1713, it required the supply of 4,800 slaves annually over the next 30 years. As it so happened, the contract did not prove very profitable, and led to the so called War of Jenkins Ear between Spain and Britain in 1739 (G2). Britain terminated the contract in 1750, by which date some 450,000 Africans had been transported to South America by the Asiento. 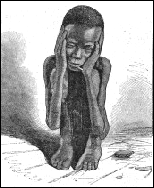 xxxxxAs we have seen, the Asiento de Negros (Negroes' Contract) was introduced by Charles I of Spain in 1518 (H8). It was an agreement between the Spanish crown and another party - be it a sovereign power or a private person - whereby a monopoly was granted for the supplying of African slaves to work in the American Spanish colonies. An agreed sum was paid to the Spanish crown for this privilege, and the contract clearly stipulated the number of male and female slaves which had to be delivered for sale in the American markets.

xxxxxThe first asentista (contractor) was a Genoese company which agreed to supply 1,000 slaves over an eight-year period. Over the next two hundred years, three countries - France, Portugal and Great Britain - entered into this contract at various times, as did a number of individual Spaniards. In general, it proved a lucrative business, providing a chance to acquire gold and silver bullion. The latest contract, as we have seen, fell to the British, and was a concession granted to them in the provisions of the Treaty of Utrecht in 1713. It was administered by the British South Sea Company, which was given the exclusive right to send 4,800 slaves to Spanish America every year for the next 30 years. In addition, the company was allowed to send one ship of 500 tons annually to Portobello to engage in normal trade.

xxxxxAs it so happened, the company did not find the enterprise very profitable. War, for example, often prevented access to the American markets, and the high annual tax imposed by the Spanish crown was sometimes greater than the profit being made. And, as we shall see, the unauthorised traffic dealing in the slave trade soured relations between Spain and Britain, leading in 1739 (G2) to a conflict known as the War of Jenkins’ Ear. The Asiento was renewed at the Treaty of Aix-la-Chapelle in 1748, but two years later the British terminated the contract. It is estimated that between 1600 and 1750, 450,000 Africans were transported to Spanish America under the asiento system.

xxxxxThe Black African Slave Trade across the Atlantic was begun in 1502 (H7). Beginning as a trickle, it developed into a torrent. It is estimated that in total some 8 to 17 million Africans were transported to the New World by 1870. Slavery had been a fact of life since the earliest “civilisations”, but the transatlantic trade was particularly inhuman, if only because of the dreadful conditions endured - and often not endured - by the slaves on their outward voyage. Taken mostly from West and Central Africa, they were set to work in the Caribbean islands, and in the colonies on the mainland of South and North America. The demand for such labour, much increased with the opening of cotton, sugar and other plantations, reached a peak of 6 million during the 18th century. This traffic in misery was part of the “Triangle of Trade” whereby European merchants would exchange manufactured goods for captured slaves, transport them to the New World, and then return to their home ports with sugar, cotton or other crops. All gained handsomely from this enterprise - including the tribal chiefs - except the slaves themselves. If they survived the voyage they were sold off like animals. Families were broken up, and men, women and children were made to work long hours in plantations or down the mines. In Britain, this vile trade was not brought to an end officially until the politician William Wilberforce succeed in persuading parliament to ban it in 1807 (G3c). 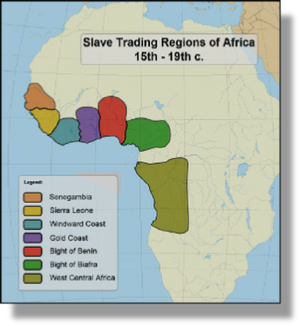 xxxxxAs we have seen (H7 1502), the Portuguese, when exploring along the west coast of Africa, were among the first to begin the Black African Slave Trade. As early as 1444 they had begun importing slaves from West Africa to work on farms and estates in Portugal. At the same time a similar traffic was being carried out by Arab traders in North Africa. Young men and women from the interior of the continent were being shipped to markets in the Middle East and India. The need to take the black African to the New World arose in the first place because it was found that they, unlike the indigenous people (reduced in number by warfare and European diseases), were more able to cope with the harsh life implicit in forced labour. Hence the introduction by Spain of the Asiento de Negros in 1518. 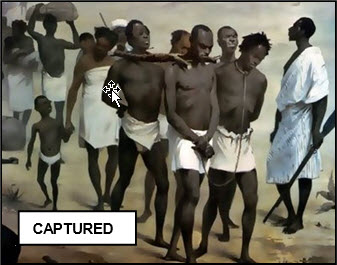 xxxxxWith the development in the Americas of large plantations for the production of sugar, coffee, cotton, tobacco, and rice, plus the need for labour in the mining industry, this traffic grew to gigantic proportions. Ground had to be cleared and buildings built, crops had to be sown and reaped, mines had to be dug and worked. As a result, from the middle of the 16th century until 1870, when the slave trade virtually came to an end, it is estimated that 8 to 17 million African slaves were transported to the New World, with a peak of some 6 million arriving in the 18th century. The vast majority of these slaves came from West and Central Africa. Of the total number, nearly half went to the Caribbean islands and the Guianas, almost 40 percent to Brazil, and some 6 percent to mainland Spanish America. Surprisingly enough, under 5 percent went to North America. 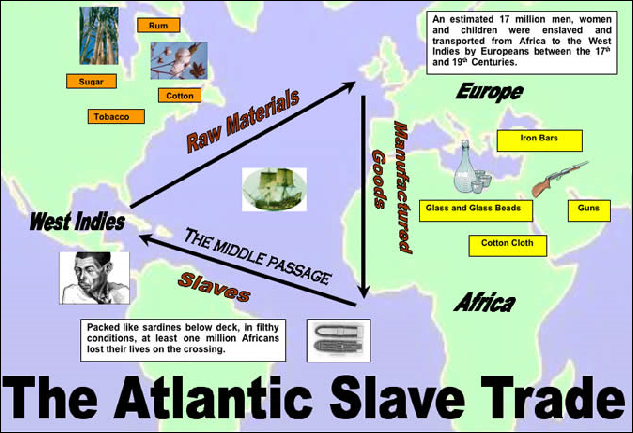 xxxxxThis trans-Atlantic traffic in slavery was the essential component of what came to be known as the "Triangular Trade". British merchants, for example, would sail to the Guinea Coast of West Africa and exchange manufactured goods (such as metal items, cloth, guns, and trinkets) for captured slaves. This human cargo would then be transported to the British West Indies, and, once the slaves had been off-loaded and sold, the boats would take on sugar, cotton or tobacco for the return journey to England.

xxxxxThis proved a very profitable commercial enterprise for the tribal chiefs who sold the slaves, the ship owner who transported them, the planter who put them to work, and the merchants and shipbuilders in Europe who grew rich from the expanding export and import markets. There was only one set of losers: the slaves themselves. This highly beneficial system of trade was accompanied by a degree of human suffering which, for size and duration, had not been witnessed before, nor surpassed since. 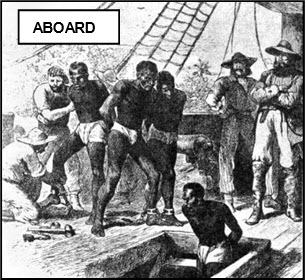 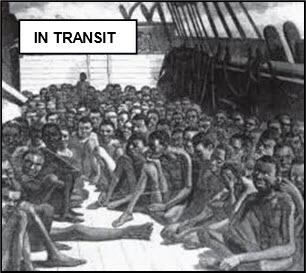 xxxxxSlavery, as we know, has been practised since the very beginning of human society, be it for sacrifice, warfare or sheer hard labour, but the transatlantic traffic was particularly degrading, harsh and inhuman, if only because of the dreadful conditions which the slaves were forced to endure on the “Middle Passage”, the long sea journey to the Americas. Having been captured by local African chiefs, they were herded aboard the ships. Here they were manacled for the entire journey, and stowed tightly on shelves alongside each other, most unable to stand, some even unable to sit up. Because of the atrocious conditions and the spread of disease, close to a third died during the three month journey.

xxxxxAnd on arrival in the New World they were treated like animals, and often branded like them. Families and tribes were broken up, and women and men alike were forced into long hours of hard labour, be it on the plantations or in the mines. For the vast majority life was brutal. For some it was also short. It is estimated that one in three died within five years. For those who under-worked, tried to escape, or rose in revolt, there were many forms of severe punishment, ranging from flogging to hanging or burning alive. They were, as a law stated in Virginia, “personal chattel in the hands of their owners and possessors”.

xxxxxThe first organised denunciation of slavery in the Americas came from the Quakers in the 1720s, but in England, as we shall see, it was the politician William Wilberforce who led the anti-slavery movement in parliament. In 1807 (G3c) he persuaded the British government to ban the trade to British colonies, but it was to be some time before this particularly vile trade was eventually outlawed by all countries and - more to the point - finally brought to an end. 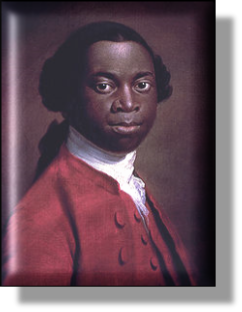 xxxxxIncidentally, a graphic and distressing account of the life of a slave was given in 1789 by Olaudah Equiano (1745-1797). Born in today’s Nigeria in 1745, he was taken into slavery at the age of eleven and, after surviving the appalling suffering of the Atlantic crossing, was put to work in Virginia.

xxxxxAlong with his fellow slaves, he endured some brutal treatment, but he was eventually bought by a British naval officer and, after working some years as a sailor, was sent to England to be taught to read and write. He was then sold to a Quaker merchant in the Leeward Islands but, being allowed to make some money by trading, he finally purchased his freedom. He then returned to England and gave valuable support to Granville Sharpe and Thomas Clarkson, the leading members of the Society for the Abolition of the Slave Trade. His autobiography - ably written - proved immensely influential, and was published in Germany, America and Holland in the early 1790s.