xxxxxThe Ashanti (or Asante), part of the Akan-speaking peoples, settled in today’s Ghana in the 12th and 13th centuries. Here they established a highly successful kingdom around the trading centre of Kumasi and, in 1689 their leader Osei Tutu, founded the Ashanti Empire. Ten years later he led a series of wars against the neighbouring Denkyira people and eventually reached the coast. Here trade was opened with the Dutch, mainly in gold, slaves and European imports. By Tutu’s death in 1712 the Empire had trebled in size. Then, under leaders like Osei Kwado - who came to power in 1764 (G3a) - it developed northwards to become one of the most powerful of the West African states. Its people posed a threat to the British when they arrived, and it took four wars before they were subdued. As we shall see, the first of these wars, which began in 1824 (G4), followed the establishment of colonial territories by the British in Sierra Leone, the Gambia and the Gold Coast in 1821 (G4).

xxxxxIt was in the 12th and 13th centuries that the Akan-speaking peoples, which included the Ashanti (or Asante), migrated from the savannah areas of the north and settled in what is now central Ghana in West Africa. Here they established a number of small states, and by the 15th century they were benefiting from the north-south trade which was developing between the coast and the Saharan caravan routes. The Ashanti people established a small but highly successful kingdom around the trading centre of Kumasi, and in 1689 their leader, Osei Tutu, founded the Ashanti Empire (see map below). And it was from here in about 1698 that, having formed an alliance with other Akan states, he launched a combined attack upon their powerful neighbour, the Denkyira. 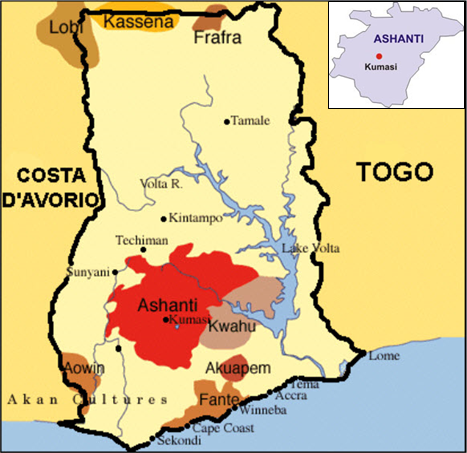 xxxxxIn a series of campaigns over the next three years, all opposition was crushed and, the coast having been reached, a lucrative trade was opened up with the Dutch at the fort of Elmina. Based on gold, slaves and European imports, it was the making of the Ashanti Empire. By the death of Osei Tutu, its founder and first king, in 1712, it had trebled in size, and its capital Kumasi, ideally situated on the north-south trade route, was a major commercial centre. But this was only the beginning. Renowned as warriors and artisans, the Ashanti people now advanced inland, subjugating the northern peoples, such as the Bono, Banda and Dagomba, and making their state one of the most powerful in West Africa, alongside the kingdoms of Benin, Kongo, Ojo and Dahomey.

xxxxxWorthy of note amongst their leaders at this time was Osei Kwadwo. Coming to power in 1764 (G3a), he consolidated the power of the monarchy and extended further his domains further north. By the early 19th century the empire stretched from the Togo Mountains in the east to the Komoe River in the west. Indeed, such was the strength of the Ashanti that they posed a threat to the British on their arrival, and it took four "wars" to bring about their final defeat. As we shall see, the first of these wars, beginning in 1824 (G4), followed the establishment of colonial territories by the British in Sierra Leone, the Gambia and the Gold Coast in 1821 (G4). 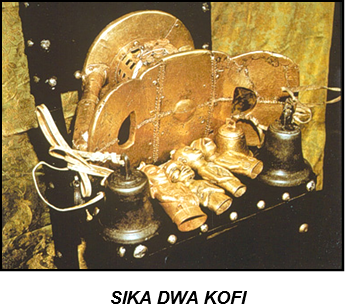 xxxxxIncidentally, before becoming Ashantehene, or king, of the new Ashanti state, Osei Tutu lived for a time amongst the Akwamu people. On returning to Kumasi he was accompanied by a priest called Okomfo Anokye and he brought with him the legendary "Golden Stool" which, he claimed, had descended from heaven. This stool became the symbol of the spirit and unity of the Ashanti people and, according to Ashanti tradition, played a vital role in the kingdom's success. As we shall see, it was the cause of a war - the so-called War of the Golden Stool - in 1900, following the end of the Fourth Anglo-Ashanti War in 1896 (Vc). The Ashanti Empire was eventually taken over by the British and made part of their Gold Coast colony.