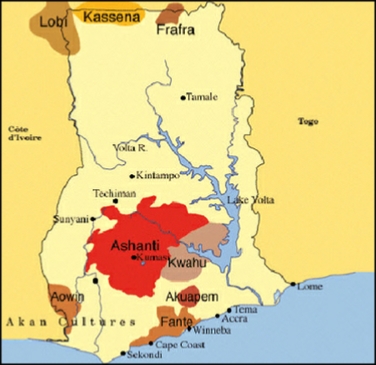 xxxxxThe Ashanti Empire, formed in 1689 by Osei Tutu, had become one of the most powerful states in West Africa by 1814. Ten years later, as we have seen, the Ashanti advanced to the coast and came into contact with the British, then busy strengthening their hold over their colonial territories of Sierra Leone, the Gambia and the Gold Coast - established just three years earlier. Conflict was inevitable, and in the First Anglo-Ashanti War which broke out in 1824 (G4), the British fared badly. An invasion force from the Cape Coast, aiming to open up the interior and put an end to the slave trade, was defeated, and its commander, Sir Charles MacCarthy, was killed. The Ashanti’s advance along the coast was eventually halted but, fearing the consequences, the British decided not to advance into the interior, and the war had petered out by 1831.

xxxxxThere followed 30 years of relative peace, but in 1863 a large Ashanti force crossed into British territory in pursuit of a fugitive, and the incident erupted into the Second Anglo-Ashanti War. There was some sporadic fighting, but the British, short in men and equipment, could not go on the offensive, and both sides lost a large number of troop through sickness. The conflict ended in stalemate the following year. 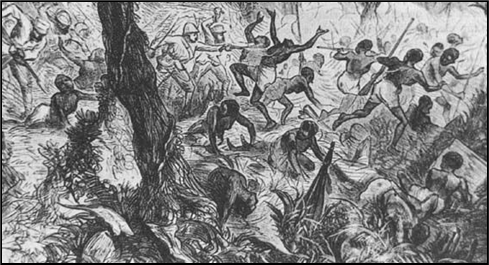 xxxxxThen in 1873 the British purchased the Dutch Gold Coast and troubled flared up again. This territory included Elmina, a coastal city notorious as a centre of the slave trade and claimed by the Ashanti. They invaded the territory in large numbers and the Third Anglo-Ashanti War was under way. Thisxtime the British were better prepared and organised 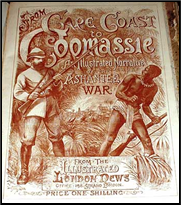 under the command of Major General Sir Garnet Wolseley, a veteran of the Crimean War. Withx2,500 British troops and a large native force he defeated the Ashanti at the Battles of Amoaful and Ordahsu, overthrew the Ashanti ruler, Kofi Karikari (1867-1874), and burnt down the capital Kumasi - all within the space of two months. Byxthe Treaty of Fomena in March 1874, the Ashanti accepted free trade, promised to end human sacrifices, and undertook to pay a large indemnity to Britain.

xxxxxAs we shall see, the final confrontation between the two sides - the Fourth Anglo-Ashanti War – broke out in 1894 and lasted two years (1896 Vc). Ashanti opposition was all but eradicated. The Ashanti territory became a British protectorate two years later, and was incorporated into the Gold Coast colony in 1901. 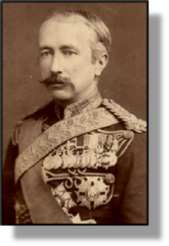 xxxxxIncidentally, the successful campaign waged by Major General Sir Garnet Wolseley (1833-1913) against the Ashanti made him a household name and a popular hero. Born in Ireland and educated in Dublin, he joined the army at the age of 19 and took part in all the major campaigns from the Crimean to the Boer War. In 1882 (Vc), as commander of British forces in Egypt, he defeated the rebellion of Urabi Pasha at the Battle of Tel-el-Kebir, and two years later led the expedition that attempted to rescue the besieged garrison at Khartoum, commanded by General Gordon. He was elevated to the peerage in 1882 and after promotion to field-marshal in 1894, was commander-in-chief until his retirement in 1900. Noted for his efficient leadership, the phrase “All Sir Garnet” came to be used in everyday conversation to mean that everything was under control. He was also the inspiration for “the model of a modern major general”, a character in the comic opera The Pirates of Penzance, produced by Gilbert and Sullivan in 1879. ……

xxxxx…… As noted earlier, the journalist Henry Morton Stanley reported on the British campaign against the Ashanti in 1873. In his newspaper, the New York Herald, he advised the troops taking part to “wear flannel next to the skin, bathe twice a day, avoid the sun, and exercise moderately”. It was soon after this assignment that, upon hearing of Livingstone’s death, Stanley decided to take up the great explorer’s work.