xxxxxAs we have seen, the Songhai Empire, the last great empire of West Africa, was defeated by the Moroccans at the Battle of Tondibi in 1591 (L1). And by this time the Portuguese had explored the coast of this area, had set up forts, and were trading with the natives in gold, silk and ivory. They were soon followed by the Dutch and then other European merchants, attracted not only by the prospect of gold, but also by the fortunes to be made in the slave trade. This had started as a trickle but, with the discovery of the New World and the beginning of the plantation system, had quickly turned into a flood. Along the “Slave Coast” three empires emerged - Dahomey, Oyo and Ashanti - all vying for the largest share of this lucrative trade. Eventually in the beginning of the 19th century the first steps were made to stop this traffic in humans. In 1808 the British, who had played a large part in this trade, opened Sierra Leone for the settlement of freed slaves, and the Americans founded Liberia for the same purpose in 1820. By this time the British and French were the dominant powers in the area. The French had established a base in Senegal, and in 1821 the British had formed Sierra Leone, the Gold Coast and Gambia into their West African Settlements. Both were to gain more territory during the “scramble for Africa” later in the century. In 1824, as we shall see, an attack by the Ashanti Empire upon their neighbour, the Fonti, led to the First Anglo-Ashanti War in West Africa. A settlement was reached in 1831. 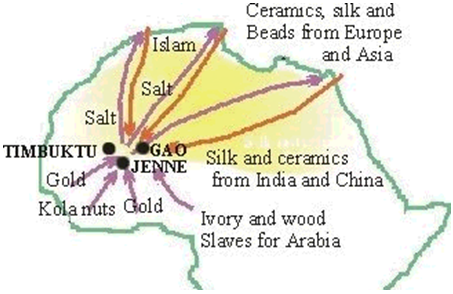 xxxxxDespite the hostile conditions, a thriving trade flourished across the Sahara desert in West Africa for hundreds of years. Large camel caravans - a thousand or more at a time - brought luxury goods (such as silks and ceramics) from Europe and the Middle East in exchange for gold, ivory and precious woods. As a result, important trading centres like Timbuktu and Gao were established at strategic points along the route, and these, together with the valuable goods that passed through them, became a prize well worth fighting for. Not surprisingly, therefore, kingdoms rose and fell, each attempting to gain control of this highly lucrative trade route. Particularly important among these were the Empire of Ghana, which reached the height of its power in the 10th and 11th centuries, but fell to the Almoravids in 1076; the Empire of Mali, founded in 1235; and the Empire of Songhai, established in 1464 under its able ruler Sonni Ali. But even the Songhai Empire, powerful though it became, could not survive an attack by the Moroccans, armed with muskets. They swept in from the north and won the decisive Battle of Tondibi in 1591 (L1).

xxxxxAnd by this time, Europeans were also making their presence felt, though confined to the coast. As we have seen, under the initial inspiration and direction of Henry the Navigator, son of King John I of Portugal, the entire western coast of Africa had been explored by the end of the 15th century, and Vasco da Gama had rounded the Cape and reached India. As they went, the Portuguese established a string of forts and trading stations along the Guinea coast of West Africa, and from here they traded in alluvial gold, ivory and spices. For a while they enjoyed a trade monopoly, but eventually other countries followed in their wake. The Dutch were the first to arrive. They virtually took over from the Portuguese, but their success did not go unnoticed. Soon merchants were arriving from France, Britain and Scandinavia, trading as companies or solo adventurers. At first, they were mainly lured by the talk of “hills of gold” in Bambuk, and the fabled wealth of Timbuktu and other trading centres, but soon another “commodity” came to rival all others in the money stakes - a vile trade in slaves. 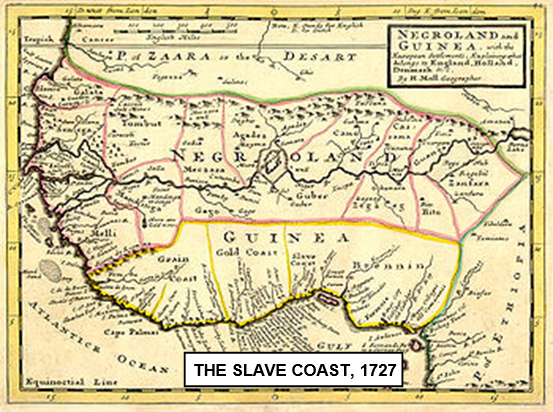 xxxxxFrom the earliest times, slaves had been taken across the Sahara to serve as servants, soldiers or concubines in the courts of the Arab and Berber princes. The Portuguese themselves had begun a small trade in slaves in the 1450s to supplement their own labour force, but the discovery of America in 1492 was to turn a trickle into a flood. By the early 16th century the demand for labour in the New World - greatly intensified with the introduction of the plantation system - was to make the trans-Atlantic slave trade a most profitable undertaking. As we have seen, the “Triangular Trade” which came into being (1713 AN) meant handsome profits for the European traders, and the African chiefs who rounded up the human cargo. Britain and France were the forerunners in this traffic - both possessing American colonies - whilst Spain contracted others to do their dirty work. Like all slavery, it was a despicable operation, but it was made the worse by the inhuman conditions which the men and women endured (or failed to endure) during the long sea crossing to the New World, - this but a prelude in itself to a life of hard labour. It is estimated that, at its height in the 1780s, an average of 78,000 slaves were arriving in the Americas every year. At least half of this number was being transported by British traders, and about a fifth by French and Portuguese merchants.

xxxxxAs one can imagine, the bitter competition that arose between the European traders and their African providers brought turmoil throughout West Africa, especially with the collapse of the vast Songhai Empire in 1591. In the interior, states like the Hausa and Mossi seized the chance to expand, whilst on the Slave Coast itself (along the Gulf of Guinea) three powerful slave empires emerged and fought throughout the 18th century to gain predominance - the empire of Dahomey (based around Benin), the empire of Oyo (the major Yoruba principality), and the Ashanti Empire (in the southern part of today’s Ghana). 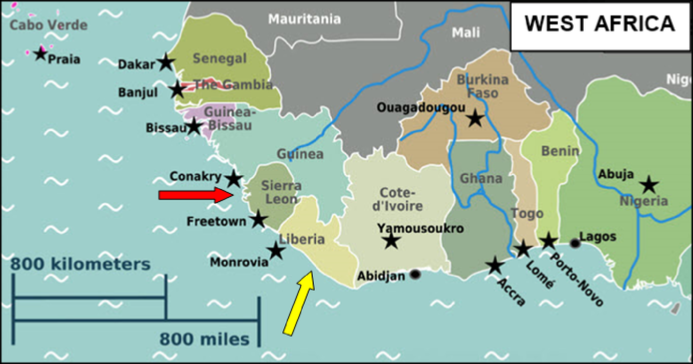 xxxxxIt was many years before this trans-Atlantic traffic in human suffering was to come to an end. The first official moves to outlaw the slave trade were made at the beginning of the 19th century, first by Denmark in 1803, Great Britain four years later, and the United States in 1808. Sweden, The Netherlands and France followed over the next ten years. The British navy, employing a squadron of some 20 vessels, took a prominent part in attempting to suppress the trade. The island of Fernando Po was initially used as a base for its operations - being strategically placed to watch over the Niger delta and the Slave Coast - but the naval force was later moved to Bathurst in the Gambia, and to the natural harbour of Freetown in Sierra Leone (arrowed on map). The latter area, occupied in 1808, was also used as a free settlement for slaves who had been rescued whilst on their journey to the Americas. Over the next fifty years more than 50,000 former slaves from many different parts of Africa were taken to Freetown, where Christian missionaries were employed to develop a new nation.

xxxxxLikewise the area known as Liberia (arrowed on map above) was purchased by the American Colonisation Society as a refuge for black slaves liberated in the southern states of the USA. The first settlers arrived in 1820, and four years later their settlement was named Monrovia (after the US president James Monroe). As the number of colonist increased, however, it took on the name of Liberia, and in 1847 became the first republic in Black Africa to gain its independence.

xxxxxBy the beginning of the 19th century, Britain and France - rivals in the Napoleonic Wars - had emerged as the major European powers in the area. The forts and factories of other nations remained dotted along the West African coast, but in the interior it was the British and French who were picking up territory as the native empires began to crumble. The French had made themselves masters of the coastal trade north of the Gambia River and, to do so, had established a major commercial centre based on their fortress of Saint-Louis at the mouth of the Senegal River. British merchants, on the other hand, whilst maintaining coastal forts in that area, had concentrated their efforts on the Slave Coast. In 1821, they laid claim to their possessions, forming Sierra Leone, the Gold Coast and Gambia into the British West African Settlements. As we shall see, both countries were to extend their territory further come the “scramble for Africa” later in the century. 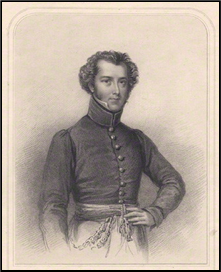 xxxxxIncidentally, serving with the British army in Sierra Leone and taking part in the First Anglo-Ashanti War of 1824, was the Scottish soldier and explorer Alexander Gordon Laing (1793-1826) (illustrated). On returning to England later that year, it was he who broke the news of the death in action of Sir Charles MacCarthy. In 1825 he set out to visit Timbuktu and explore the Niger basin, but while crossing the Sahara he was attacked by local tribesmen and severely wounded. He managed to reach Timbuktu - the first European to do so - but on leaving there in September 1826 he was again attacked and this time lost his life.xThe journal of his earlier explorations in West Africa was published in 1825. The first European to reach Timbuktu and return alive was the French explorer René Caillié (1799-1838). He reached the town in April 1828 and, after a stay of fourteen days, returned to France by joining a caravan travelling across the Sahara to Morocco. ……

xxxxx…… An earlier attempt to make Sierra Leone a settlement for freed slaves was made by opponents of the slave trade in 1787. Aimed at resettling former slaves who had come to London, it was not enthusiastically received. Eventually up to 350 sailed to Sierra Leone, but within four years only some sixty had survived the primitive conditions and the local fighting. However, these were joined by some 2000 freed slaves from Nova Scotia and Jamaica and, as we have seen, in 1808 the British government took over the colony from the Sierra Leone Company and gave official backing to the scheme. ……

xxxxx…… During the forty year period 1825-1865 the British squadron working off the coast of West Africa to suppress the slave trade, stopped and boarded 1,287 ships and liberated around 130,000 slaves. Despite such efforts (made primarily to boost British trade in conventional commodities!) it is estimated that about 1.8 million slaves arrived in the Americas during that period. ……

xxxxx……  As we shall see, in 1824 an attack by the Ashanti Empire upon their neighbour the Fonti involved the British, and led to the First Anglo-Ashanti War in West Africa. A small British force was defeated in that year but, two years later the Ashanti army was repulsed and peace was made in 1831.