xxxxxAs we have seen, it was in 1738 that the great Iranian ruler Nadir Shah captured Kandahar and then conquered most of Afghanistan. The following year, 1739, he invaded India and, sacking Delhi, took away a vast horde of royal treasure. When he was assassinated in 1747, the commander of his Afghan bodyguard, Ahmad Khan Abdali, was elected king of Afghanistan as Ahmad Shah Durrani. Over the next 20 years he invaded India nine times, plundering Delhi in 1757. He made no attempt to set up an empire there, but was anxious to establish a trade route to the east, based on the major cities of northern India. He warred against the Mughals, Marathas and Sikhs, and by the early 1760s was in control of a vast territory which included Kashmir, Sind and western Punjab. As we shall see, he defeated the Marathas at the Battle of Panipat in 1761 (G3a), putting an end to their dreams of an Indian Empire.

xxxxxAs we have seen, in 1738 the great Iranian leader Nadir Shah captured Kandahar and then occupied almost the whole of Afghanistan. Then in 1739 he invaded northern India and plundered Delhi, taking away vast hordes of royal treasure. The "Second Alexander", or the "Napoleon of Persia" as he was later dubbed, then embarked on a campaign of conquest which made him the most powerful ruler in the Middle East. But as a tyrannical and cruel leader, he was much feared, and in 1747 he was assassinated by a group of senior army officers. 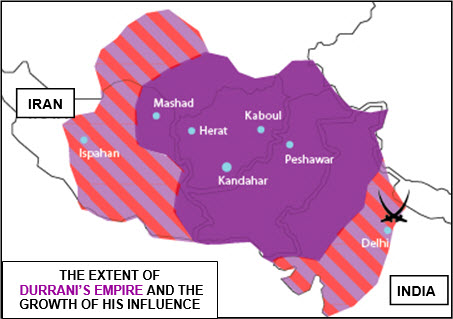 xxxxxDirectly following his death, the commander of his Afghan bodyguard, Ahmad Khan Abdali, was elected king of Afghanistan by a tribal council. As the first ruler of a united Afghan state, he assumed the title Ahmad Shah Durrani and was crowned at Kandahar, the city which became his capital. After consolidating his hold on the country, he, like his late master, cast covetous eyes upon northern India in general and the city of Delhi in particular. Over the next twenty years or so he invaded India no less than nine times, sometimes meeting with little opposition. In 1757, for example, he marched on Delhi unopposed and, after plundering the city, went on to capture Agra, Mathura and Vrndavana. He made no attempt to establish any form of empire in India but, apart from acquiring valuable booty, it would seem that he was anxious to establish a trade route to the east, based on the major cities in northern India. 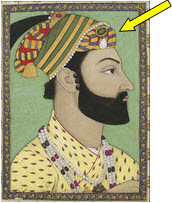 xxxxxBut the Mughals were not his only target. He battled with the Marathas and Sikhs, and by the early 1760s had gained control of a vast expanse of territory which included Kashmir, Sind and western Punjab, and stretched from eastern Iran to Delhi, and the Amu Darya River to the Arabian Sea. An outstanding military leader, his greatest achievement came in 1761 (G3a) when, as we shall see, he defeated the Marathas at the Battle of Panipat, north of Delhi. This defeat not only put an end to their dreams of an Indian Empire, but it also helped to smooth the way for the eventual conquest of India by the British.

xxxxxIncidentally, Durrani, the title that Ahmad Shah assumed at his coronation, comes from Durr-i Durran and means "Pearl of Pearls". …… In the portrait above - despite his title - the Mughal peacock crown contains the famous white Koh-i-Noor diamond (arrowed).