xxxxxLike his contemporary, the Italian physiologist Marcello Malpighi, the Dutchman Antoni van Leeuwenhoek was a pioneer in microscopic research. They founded histology, the branch of medicine concerned with the minute structure of cells, tissue and organs. Leeuwenhoek  ground his own lenses,  and the magnification he achieved with his single-lens - nearly 300 - accounts for his remarkable success. He provided the first accurate description of a variety of living structures (including bacteria in 1683), and confirmed Malpighi’s discovery of the capillary system - thus proving William Harvey’s theory of blood circulation. His findings were recorded in some 350 letters sent to the Royal Society in London, and included the discovery of protozoa and the working of the muscles of the human eye. He was a friend of the Dutch scientist Christiaan Huygens, and they may well have worked together in making more efficient lenses. Such was his fame that he was visited by no less than Peter the Great of Russia, Frederick II of Prussia, and James II and Queen Anne of Britain. Unfortunately, he refused to disclose his grinding technique, and this delayed the improvement of lenses until the early 19th century. His major work, Arcana Naturae Detecta, was published in 1695. 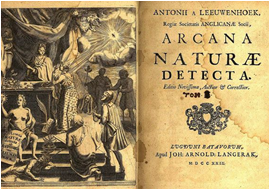 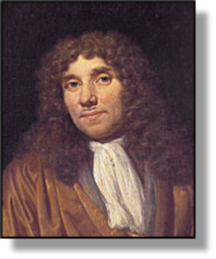 xxxxxThe Dutch draper Antoni van Leeuwenhoek, like his contemporary the Italian physiologist Marcello Malpighi, was a pioneer in microscopic research and made a number of important discoveries. Together they founded what came to be known as histology, a branch of medicine concerned with the minute structure of cells, tissue and organs. His remarkable success was due to the quality of his single-lens microscopes. He ground his own lenses - over 400 in all - and with some he achieved a magnification of nearly 300, an astonishing improvement on earlier microscopes. This enabled him to give the first accurate description of a variety of living structures, including individual red corpuscles, the spermatozoa of both humans and insects, and the different shapes of bacteria (1683). Furthermore, in 1668, by close inspection of a rabbit's ear, he confirmed and further clarified Malpighi's discovery of the capillary system, thus providing visual proof that the theory on blood circulation, put forward by the English physician William Harvey, was correct. 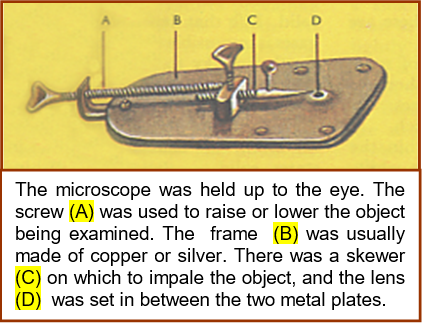 xxxxxHe was born in Delft  and started his working life in Amsterdam as an apprentice to a cloth merchant. He returned to Delft in 1652 and set himself up as a draper and haberdasher. He had little, if any, education of a scientific nature, but, as a hobby, he took up lens grinding, and made a number of tiny double-convex lenses with which to look at small objects. In about 1672, at the age of 40, he began to use his home-made microscopes for detailed observations of human, insect and plant life. He spent the next 50 years - until his death in fact -  in microscopic study, and his findings were recorded in detail in some 350 informal letters that he sent to the Royal Society in London. During this research he discovered protozoa (single-celled organisms), examined the working of the muscles of the human eye and, like Malpighi, devoted some time to the study of plants and the life cycle of insects - such as fleas, aphids and ants. Research of this kind led him to repudiate the theory of spontaneous generation, prevalent at that time and not really abandoned until the middle of the 19th century. His major work Arcana Naturae Detecta was published in 1695.

xxxxxThe Dutchman Jan Swammerdam (1637-1680) also made good use of a microscope. Interested in entomology, he was the first to classify insects into four groups. His General History of Insects, published in 1669, contained life cycles of a number of species, including bees and dragonflies, and in 1675 he produced Life of the Ephemera, an illustrated treatise on the mayfly. In his work on human anatomy, he is remembered for his study of the lymphatic and reproduction systems, and he was the first to describe red blood cells, later confirmed by Leeuwenhoek. The value of his research was not fully appreciated until 1737, when his findings were published in The Bible of Nature, compiled by the Dutch physician Boerhaave (1708 AN).

xxxxxHis series of discoveries brought him fame. He was made a fellow of the Royal Society of England in 1680, and most of his discoveries were published in the society's Philosophical Transactions. Two collections of his work appeared during his life time, one in Dutch and one in Latin. Among the many notables who visited him at work were Peter the Great of Russia, Frederick II of Prussia, and James II and Queen Anne of Britain. He is regarded by some as the Father of Bacteriology. Unfortunately, however, the pioneer work he made in microscopy did not bring lasting benefit, because he refused to disclose the grinding technique he used in the making of his superb lenses. It was not until the early 19th century, in fact, that the improvement of the compound lens brought further advances in this field.

xxxxxIncidentally, Leeuwenhoek was a friend of his fellow countryman Christiaan Huygens. As we have seen (1657 CW), this Dutch scientist also ground his own lenses and by 1655 had greatly improved the quality of his telescope, making possible a number of discoveries, including that of Titan, one of Saturn's moons. Little is known of their friendship, but It is just possible that Huygens helped Leeuwenhoek (or, indeed, vice versa) in the making of more efficient lenses. 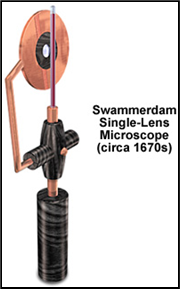 xxxxxAnother Dutchman who made good use of a microscope was Jan Swammerdam (1637-1680). He was particularly interested in entomology, and was one of the first to classify insects into four groups, three of which have survived in modified form. He also made a study of the anatomies and life cycles of a number of species, including bees and dragonflies. In 1669 he published his findings in his General History of Insects, and later, in 1675, produced a comprehensive treatise on the mayfly entitled Life of the Ephemera, a work noted for the detailed quality of its illustrations.

xxxxxHe was born in Amsterdam and, after taking medicine at Leiden University, devoted his time to a microscopic study of human anatomy, animals, insects and plants. In his work on human anatomy, he is best remembered for his discovery of the valves in the lymphatic system (still known as Swammerdam valves), and for his examination of the human means of reproduction. He is also considered to be the first microscopist to describe red blood cells, observed by him in 1658 and later confirmed in greater detail by Leeuwenhoek.

xxxxxAlthough he published several treatises during his working career, the value of his research was not fully appreciated until his manuscripts - including illustrations - were published in 1737/1738 by the Dutch physician Hermann Boerhaave (1708 AN) in a two-volume work in Latin and Dutch entitled Biblia naturae (The Bible of Nature).