xxxxxThe French cleric Anselm, who had worked under Lanfranc at the Benedictine School at Bec, was appointed Archbishop of Canterbury in 1093. He was soon in dispute with William II over the investiture controversy, and he left in 1097. He made important contributions to philosophy and theology. His major works were Why did God become Man? of 1098, and his treatise Proslogion in which he argues that if man can conceive of a perfect being, then such a being must exist. Such works earned him a European reputation. As we shall see, he later served Henry I and was again exiled in 1103 (H1). 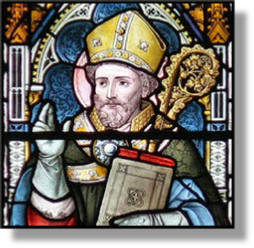 xxxxxBorn in Piedmont in 1033, Anselm crossed into France at the age of 23 and attended the Benedictine school at Bec in Normandy, then an important centre of learning under the direction of the theologian Lanfranc. He was appointed abbot in 1078 and further advanced the reputation of Bec as an outstanding place of scholarship. 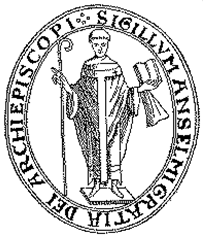 xxxxxIn 1093 he was appointed Archbishop of Canterbury, a post which he accepted with some reluctance. The See had been vacant for some four years following the death of Lanfranc and might well have remained vacant for much longer had William II not been taken seriously ill and thus become anxious to salve his conscience. Anselm's misgivings proved justified. He was soon in serious dispute with the King, the quarrel centred for the most part around the Pope's role in the affairs of the English church, particularly the old issue of the investiture controversy - who had the right to appoint Church officials such as bishops and abbots. Within two years the position had become intolerable. Anselm sought permission to visit Rome, but it was not until 1097 that William let him go. Once he had departed, the king lost no time in seizing all the revenues of Canterbury! Clearly the break was complete as far as William was concerned but, in fact, Anselm did return in the following reign - only to be exiled once again in 1103 (H1)!

xxxxxThis bitter controversy between church and state, important though it was, must not be allowed to overshadow the immense contribution made by Anselm in both philosophy and theology. Indeed, he may be regarded as one of the great intellectuals of the Christian faith and certainly the most brilliant theologian and philosopher of his day. His writings earned him a European reputation. Among his works are Why God become Man (Cur Deus Homo) of 1098, dealing with the subject of the atonement, and his Proslogion, an influential treatise in which he puts forward the ontological argument that if man is able to conceive of a perfect being then this notion cannot exist only in the mind, but must find perfection in reality. This simplistic argument was not without its critics, but versions of it were later used by the Italian theologian Thomas Aquinas and the French philosopher René Descartes, and it later attracted some strong criticism from the German philosopher Immanuel Kant.

Anselm: stained glass window in the Church of Our Lady and the English Martyrs, Cambridge, England. Seal: that of Anselm of Canterbury, contained in The Historical Memorials of Canterbury by the English churchman Arthur Penrhyn Stanley (1815-1881), published 1857.